'A Day Without Immigrants' Draws More than 7,000 to Charlotte's Marshall Park

Businesses across the city shut down today in protest of recent ICE raids while more than 7,000 people rallied in Uptown to support the immigrant community. CL reporter Jasmin Herrera was there to shoot photos while the crowd marched from Marshall Park to the center of Uptown and back again.

News To 'Rise' and March For What Is Theirs 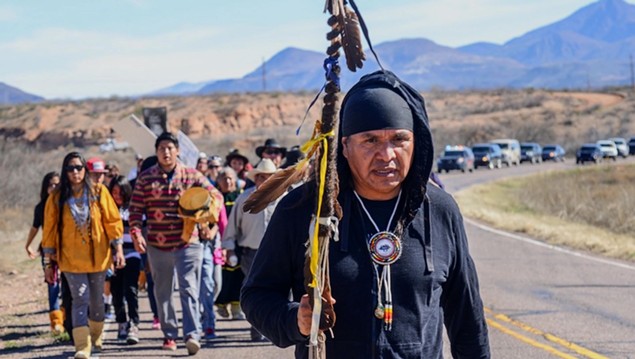 Apache leader and longtime indigenous rights advocate Wendsler Nosie, Sr., will be speaking at an event in Uptown on Friday night to raise awareness for his years-long fight against efforts to build a copper mine on his tribe’s land in southeastern Arizona. He and local advocates also aim to tie that fight in with land issues facing native and non-native people throughout the country.

Nosie will be the keynote speaker at the Apache Stronghold event at Goodyear Arts on Friday night. The event was organized by Allie Fredericks, who moved to Charlotte three weeks ago after spending nearly a year living with the Apache Stronghold at Oak Flat, a sacred site in danger of being lost to the potential mine construction. The locally-based American Indian Party is hosting the event.

The Apache Stronghold's struggle against the powerful Arizona copper industry will soon be featured in an episode of the new Viceland series, “Rise." Organizers will screen the episode at the event on Friday.

Hosts on Friday will focus not only on the fight for Oak Flat, but emphasize the relevance to everyone of preserving federal land and land promised to indigenous tribes.

Speaking over the phone on Thursday, Nosie said he’s touring the country — as he’s been doing for nearly 14 years now — to educate people on the importance of holding the government accountable when they renege on federally mandated environmental protections, as they did when they approved a land exchange with Resolution Copper Mining, LLC as part of the National Defense Authorization Act of 2015.

“The administrative process that is required for federal law to go into effect, that law doesn’t particularly deal with the Indian tribes, it deals with all of us,” Nosie said. “But naturally, the land issue and the water issue and the environment is very important to us, and so I think over the years, not only native people but non-native people are waking up to the issue about how Congress can exempt laws — as pertaining to this particular one — that protect the land and water.” 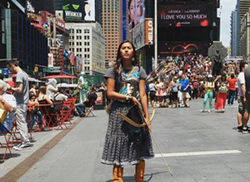 He said while he has been fighting against exemptions to Environmental Protection Agency mandates under multiple administrations, the Trump administration brings new fears that the president could do away with environmental protections — or the EPA as a whole — altogether.

“Now with the new president there, he threatens all preservation, he threatens the future of all people. That’s why I come up here to North Carolina,” Nosie said. “It’s not only for native people but for the people in general, because what I’ve found is that people around this country don’t realize that they have a say on federal land. Even though the land is in California, Arizona, or wherever, if you’re in the United States, you have a say.”

Despite the broad reach of Nosie’s message, a goal of Friday night’s event will be to focus on what can be done on a local level. Representatives of the AIP and Metrolina Native American Association will be on hand to discuss local issues such as recent efforts to change Columbus Day to Indigenous Peoples’ Day and the AIP’s clothing drive, being held at Healthy Home Market this year until Feb. 15.

According to Robert Greeson, who is active in the AIP and MNAA, Friday night’s event isn’t just about informing people, but inspiring people to take that information and act on it.

“It’s not to just give people knowledge and do nothing with it, but to harness that knowledge,” Greeson said. “Knowledge alone isn’t power, knowledge with action is power. Nobody cares what you know, they care what you do with what you know.” 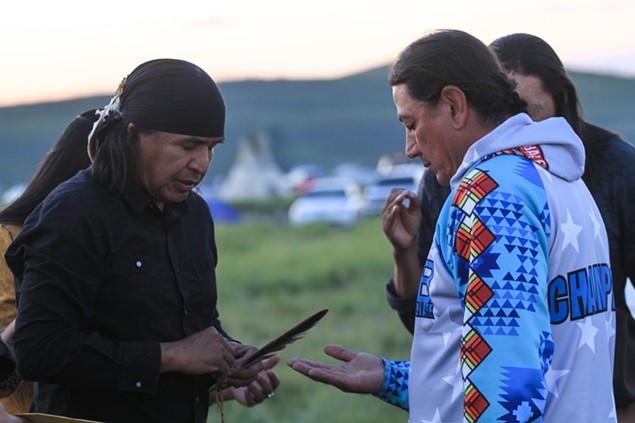 Fredericks said she’s been inspired while meeting with local indigenous organizations since moving to Charlotte, and hopes Friday’s event spurs momentum in an indigenous movement that’s already grown in popularity since recent protests by a multitude of tribes at Standing Rock reservation in North Dakota regarding the Dakota Access Pipeline.

“It’s one of these things where I know people are very open in light of recent political events,” Fredericks said. “It’s becoming more and more important for people to know their own communities and who’s in their own cities and states. I’m really excited that people want to know whose land they’re on.”