News / Opinion Question the Queen City: Hugh McManaway, the man behind the statue

There's a statue at the corner of Providence and Queens roads that has been in the news a lot lately. It was hit by a car, damaged, and then it disappeared for awhile. Now it's back. What's the story on the man behind the statue? - Peter Campbell, Gastonia 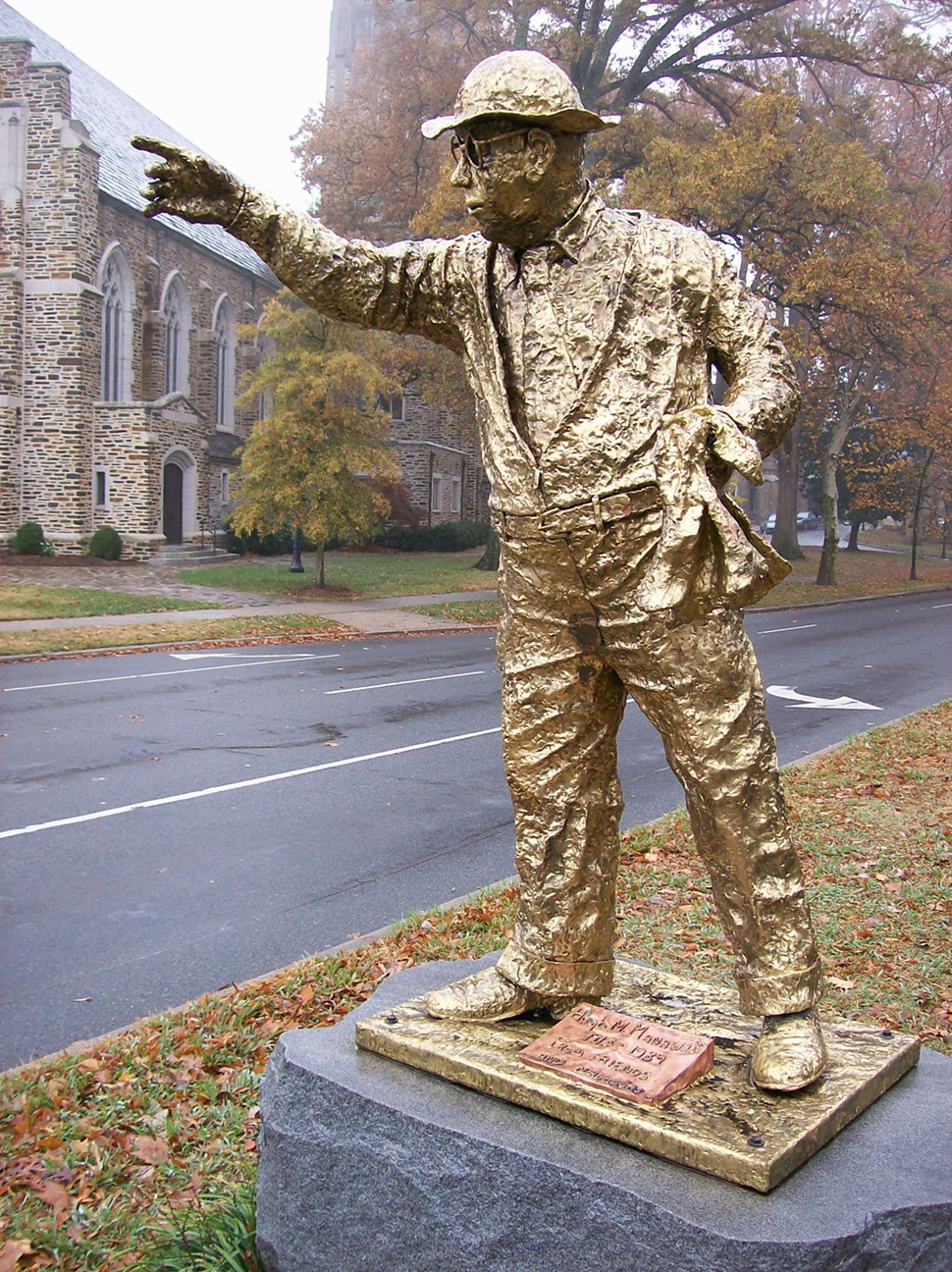 You're talking about the Hugh McManaway statue. Originally erected in 2000, it was smacked down in August by an unknown driver who made a quick getaway. Who hit the statue remains a mystery.

The story behind McManaway's life, however, is not. He passed away in 1989, but I can still see him in my mind's eye just as clearly now as I did back in the 1970s when I was a young boy riding around town with my parents.

On a trip to the Manor Theatre or maybe a family picnic at Freedom Park we'd often take the opportunity to tool around Myers Park to marvel at the architecture of some of Charlotte's grandest old homes. It was there that we'd always see him - standing at the horribly confusing intersection of Queens and Providence. It's that place where one street seemingly turns into the other and you've gone the wrong way if you don't turn, even though your instincts tell you to go straight.

McManaway was that odd fellow who would stand at the corner with a white towel in his hand, directing traffic - not just for those unlucky drivers that were already confused - but for anybody who was passing that way. It didn't matter if your light was green or red, McManaway still urged you to go the way he wanted you to go.

McManaway was born in 1912 to Dr. Charles McManaway and his wife, Josephine. By the age of 3 it became apparent that something wasn't quite right with Hugh - he was labeled "mentally retarded." His father he died in 1918 at 61, leaving behind his much youger wife Josephine to care for then-6-year-old Hugh.

But Josephine wasn't the only one caring for Hugh. As he grew older, he ventured out of the stately McManaway home at 1700 Queens Road and into the world around him, making friends with just about everybody he met. According to recollections from some of the neighbors in Myers Park, Hugh was quite well known for dropping by unannounced, often around meal times and frequently for hours at a time. Despite his impromptu and extended visits, he was embraced for his kind heartedness.

Although many branded Hugh as mentally inept, there were certain areas he clearly excelled in. In the book "Weird Carolinas" a page is dedicated to McManaway and details some of his various talents - beyond directing traffic.

"Hugh had memorized the entire Bible and could recite randomly chosen passages word for word," writes author Roger Manley. "He could also instantly replay almost any piece of music he heard - on a musical saw."

Manley goes on to recount tales of grand concerts Hugh and his mother would stage for neighborhood kids with everyone singing hymns, drinking lemonade and Hugh accompanying on musical saw.

Another talent - speaking in rhyming verse - indicates that Hugh was, in all likelihood, an autistic savant.

As for his joys of traffic directing, Hugh had this to say: "I see who will turn and who will still stop, but I'm not really a traffic cop. Some play tennis, some play ball. I just direct traffic, that's all. I'm not serious. I'm delirious. I can't talk like you. I'm just crazy Hugh."

Hugh's career as the self-appointed traffic director of Myers Park kicked off in the late '50s, when Josephine would have been growing increasingly frail, somewhere in her early 80s and unable to exercise much control over her roaming son. She devoted her life to her son until her death in 1963 at the age of 87. When she passed, Hugh was left alone in the family's 20-room mansion.

He lived in the home for years, visiting longtime neighbors and directing traffic, until he suffered an epileptic seizure in 1976. The following year he moved to the Green Acres Rest Home, where he would remain until his death in 1989 at the age of 77. He was buried in Elmwood Cemetery in the McManaway family plot, although there is no specific marker bearing his name.

The statue came about after two sisters, Kitty Gaston and Anne McKenna, wanted to pay homage to the memory of McManaway and inform newcomers about the amazing man. Eventually they contacted sculptor Elsie Shaw and started raising money for a statue.

Along with an Arts and Science Council grant for $65,000 and an undisclosed sum from former Bank of America CEO and arts patron Hugh McColl, the project was completed in 2000.

For many, it stands as a testament that in the 21st century Charlotte is proud to embrace - and even brag about - the unusual and diverse in our culture and history.

David Aaron Moore is the author of "Charlotte: Murder, Mystery and Mayhem." His writings have appeared in numerous publications throughout the U.S. and Canada.