Jay-Z headlined the Glastonbury festival this year and kicked off his set with a cover of Oasis' "Wonderwall."

It was a great idea and a jab at Noel Gallagher who was critical of the decision to have Jay-Z at the fest. However, while he may be the king of rap, it proved he's not good at singing on key.

It goes into "99 Problems," which offered a bit of AC/DC thrown into the mix.

Jill Scott True, Scott's music does contain lots of "can-do" rhetoric – she can even "stain and polyurethane," as she sings in "The Fact Is (I Need You)" of off 2004's Beautifully Human: Words and Sounds Volume II – that could be misconstrued, upon first listen, as mere cocksure artifice. However, Scott doesn't make these proclamations by claiming that she can do any of these things better than you – knuckle-headed separatist boasting being the Achilles heel of most current soul – but that she can, in fact, do them, and furthermore can do anything she damn well wants to – which, it seems, includes releasing beautifully human contemporary soul records that espouse positivity over posturing, sensuality over sexuality, and emotional heft over erotic huff and puff. Ovens Auditorium (Timothy C. Davis)

Islands This Montreal sextet, born from the ashes of experimentalist indie faves The Unicorns, started off promisingly in 2006 with wildly inclusive debut that featured everything from twang to calypso and rap. But their Anti- debut Arm's Way has been getting mixed reviews, mostly for abandoning the band's kitchen sink approach for a more unified indie pop sound that's nowhere near as playful. Live, though, the band is said to tear shit up. With AWOL and Crayonsmith. Neighborhood Theatre. (John Schacht)

Hammerlock Cali's redneck punk rockers, led by good ol' boy and good ol' gal couple Travis (guitar, vocals) and Liza Kenney (bass, vocals), have been trouncing crowds with their Southern-fried sleaze rock since forming in the unlikely, decidedly un-Southern burb of San Francisco in the mid-'90s. Somewhere in Bay Area Southern rock had a head on collision with metal and punk to sprout Hammerlock. Also on the bill: The Flat Tires and Deviltones. Milestone (Samir Shukla)

Photos / QC After Dark Who does your schedule?

After my friend asked me about my week, he had to pause and ask ...."Who does your schedule?"

I do… and I think I might have to fire myself.

“New Club Will Bring Pure Dance Back to Charlotte Nightlife,” …says the press release I just received regarding the opening of The Garden and Gun Club at the NC Music Factory, which will neighbor the hub of this blog: the Creative Loafing offices.

I don’t know about you, but I’m excited for this new edition to Charlotte nightlife, based on the information below… and the convenient location. But the question is, how convenient will it be for those who aren’t basically already there?

The Lonely H Definitely not to be confused with the grunge-flavored two-piece Local H, this Washington-state outfit instead takes its cues from our region – circa the 1970s – and plays a funk-flavored, riff-happy, occasionally deep-fried or twangy Southern rock that sounds like a mash-up of The Black Crowes, The Allman Brothers, The Band and Big Star. The mix occasionally gets muddled, but otherwise they breathe fresh air into an otherwise moribund genre just through their enthusiasm alone. With Bandazian and Sikamor Rooney. Snug Harbor (John Schacht)

Capleton What keeps Capleton at the upper rungs of reggae stardom is his knack for mixing damn infectious dancehall with Rastafarian mysticism. It's this Jamaican blend that helps avoid the incessant repetition so common in dancehall reggae. His self-adulation and occasional forays into homophobic lyrics aside, the thick, rapid-fire toasting is blanketed by booming rhythms layered with classic roots rhythms. Tremont Music Hall (Samir Shukla)

The Blue Dogs The Carolina boys are an area favorite, playing rock based in Americana. They've cut back their touring schedule – they've been in the business for 20 years and need some rest, right? The only new release they have planned is a live DVD, so look for more of the same from these guys this time around. Visulite (Jeff Hahne)

I guess you shouldn't mess around at a Tim McGraw concert. At a show in Washington state earlier this week, he pulled a "fan" out of the crowd and looked like he was about to kick his ass... kicked him out of the concert, to say the least.

Funny how he first calls security and then acts as if to say, "I'll just do it myself." Of course the jackass waves his hat like he's cool when he's being escorted away...

Joey Belladonna Anthrax, the band with which Belladonna sang with for many years (present for most of the group's salad days, he was replaced by former Armored Saint yowler John Bush in 1992), was always one of the strangest birds in the metal aviary, and Belladonna, with his jet-black, flowing perm, Steve Perry-on-uppers voice and NYC take on the hair metal blues, was its unmistakable beak. Belladonna's set is said to feature a solid amount of Anthrax Faves ("Got The Time," "Among The Living") along with some solo set pieces from various projects over the years. With Restless Oblivion and Black Ritual. Amos Southend (Timothy C. Davis)

The 2008 DUB Car Show drove through the Convention Center on Saturday with its own brand of flash and ass.

A welcome distraction to the showcase of cars you can’t afford and women you couldn’t get with was a concert that featured a bevy of local acts and basically DTP’s entire roster. 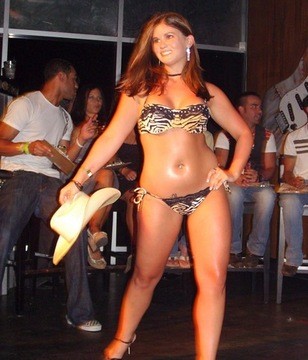 Last night, I went out for the purpose of going to a benefit at the Wachovia Atrium for the Mental Health Association, and somehow ended up judging Whisky River’s Boots & Bikini contest… I swear I am not a mental health patient.

Although my friends may beg to differ.

They said I should’ve taken the short bus to the Atrium... so, I stood up for my shortness – “5’2” baby!” They just shook their head and said I reiterated their point.

The MHA’s “Lifting Spirits” party wasn’t insane... But it was some fundraising fun.