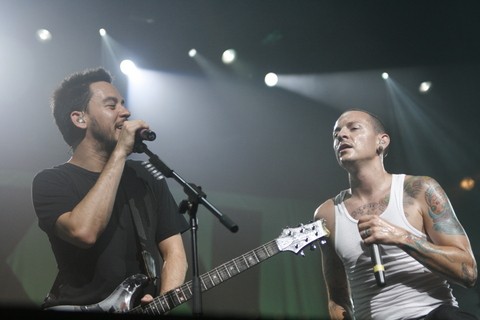 The Deal: Linkin Park bring along a bunch of their friends for annual Projekt Revolution Tour. (Setlists for Chris Cornell and Linkin Park at the end of review.)

The Good: Let's cut to the chase — biggest highlight of the day was Chris Cornell and Chester Bennington singing "Hunger Strike." Two of rock's best singers on the same stage and sharing gutteral screams gave me goosebumps.

Hawthorne Heights has one of the most active guitarists I've seen live, but the rest of the band just stands around.

10 Years finally got the crowd into a frenzy and I see a lot of potential in the group. Some good rock songs, with a splash of Monster.

Atreyu was all over the place — on the stage, physically, I mean. The singer constantly jumped down to get close to the crowd. I think it's the first time I've seen a triple-bass on a drum set.

Street Drum Corps has a hyper frontman and the music reminded me of Stomp with vocals and a guitar. The drummers pounded away on all kinds of oil drums and random objects. They also showed up for the intro and encore of Linkin Park's set.

If there was any doubt that Billy Howerdel wouldn't stand on his own after A Perfect Circle, Ashes Divide's performance proved the doubters wrong. He's getting more comfortable as a frontman, and the songwriting is solid.

Chris Cornell was more lively than he was at his Ovens concert last fall. He sings with incredible ease and rocked through material from every band he's been a part of — Temple of the Dog, Audioslave, Soundgarden and his solo career. He also played two songs off of his upcoming album, Scream. The new stuff sounded just as good as the rest.

Linkin Park closed the night with an hour-and-a-half set that featured an array of hits from their albums. No sign of "Qwerty," but the fans left happy. If they do this again next year, I hope they have a new album out first. The band sounded great, but it was basically the same stuff as last year.

The Bad: The worst part of the day, no matter how you look at it was the heat. I now know what it would feel like to stand on the surface of the sun. Rumor from The Bravery singer was that the heat index was 106. I believe it.

Armor for Sleep plays with a lot of energy, but I got bored after two songs. It just sounded the same and didn't draw me in. I'd say the same for Hawthorne Heights.

I'm not saying he was drunk, but The Bravery singer Sam Endicott looked like he was teetering on the edge of passing out. Made for a great stage presence and show, but his vocals sounded like they were off a key at times.

The Verdict: An all-around strong show on a long, hot day.

Show Me How To Live

Leave Out All The Rest

The Little Things Give You Away

Shadow Of The Day