In some odd way, I think my body is getting used to only three-and-a-half hours of sleep each night... sadly. And I always wondered what I looked like with three days of facial hair growth — sadly, much like hot water and indoor plumbing, there are no mirrors around. Anyway - let's get to the music:

My day started at noon with the hip-hop infused Latin grooves of Bomba Estereo. They describe their music as electro-tropical, and that's a fair description. Singer Liliana Saurnet has the energy of M.I.A. — and the sense of style, too.

Next up was the mellow African sounds of Baaba Maal. It took him a little while to warm up and start smiling and dancing...

I finally got to see Brandi Carlile and was impressed by everything I saw. She started off the set with something she said was an experiment — her and her band singing with only a ukelele accompanying them. It worked perfectly and Carlile later said in a press conference that she was moved by the experience of having so many people be quiet to listen to them. 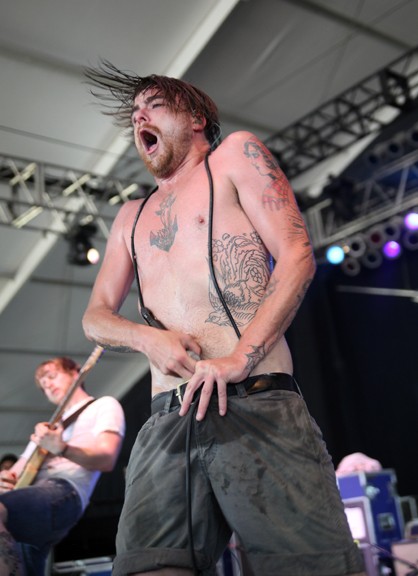 On a hunch I next checked out Circa Survive in This Tent. Holy shit! Singer Anthony Green — formerly of Saosin — was off his rocker, to put it mildly. He was all over the place, sweating profusely mid-way through the first song, screaming his head off, singing in a high-pitched voice and asking the crowd to throw all of their clothes at him. "You don't need them!" he yelled. "I want it to rain a sea of cotton and polyester." He also spent a good amount of time... well, I'll say molesting himself on stage, thrusting his hand down his pants. The band puts on a helluva entertaining show and I'm hoping they pass through Charlotte so I can catch the whole thing. 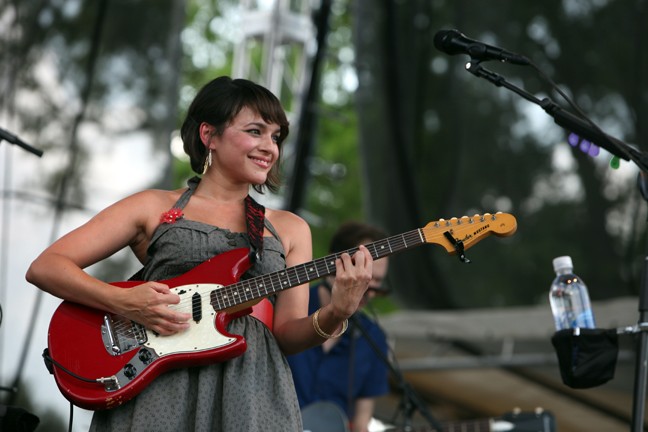 In a stark contrast, Norah Jones was next up on Which Stage. Her voice sounded fantastic as she opened with "What Am I to You." 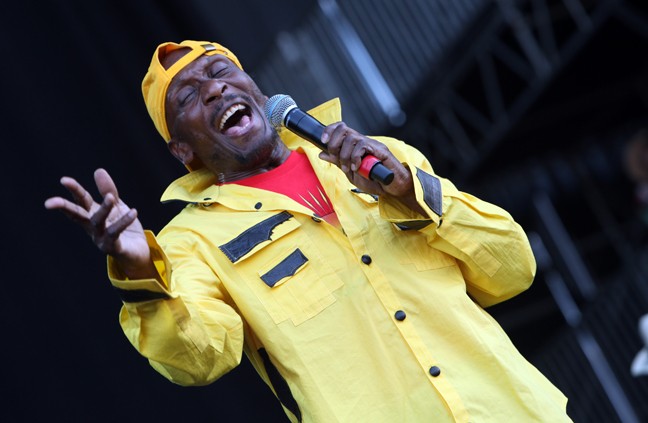 Reggae legend Jimmy Cliff shook, shimmied and danced his way around the main stage, What Stage, next.

At 4:45, The Avett Brothers took to Which Stage and performed to a massive crowd. Sure, some may have been there early for Weezer, but there sure were a lot of people singing along and no one was leaving til the last notes rang out.

The guys seemed a bit toned down — maybe the addition of a drummer, supplementing their usual foot-stomping has taken away some of the energy? Or maybe it just took them some time to warm up. Either way - sonically, the boys haven't changed a bit and their emotional lyrics are still delivered with as much heart as possible.

Almost an English version of the Avetts, Mumford & Sons played in That Tent. The singer, with acoustic guitar and kick drum is just one similarity, but clearly a different sound and vibe to the stage despite the Americana leanings.

The Dead Weather stormed onto What Stage. As Jack White hammered away on the drums, singer Alison Mosshart showed off her best frontwoman energy. It's stunning how she commands attention and you nearly forget White is even there. 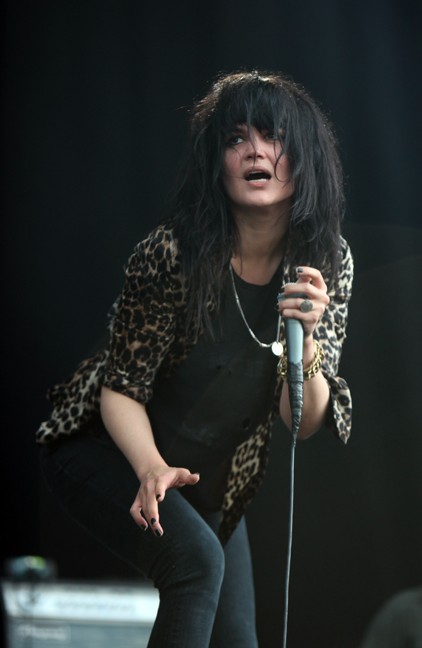 Mosshart whips her hair with a fury, crawls around, stares you down and lets every word sink in.

Jeff Beck was next in This Tent and his lack of pick as he strums and plucks with his thumb is almost as impressive as the riffs he tears into. He may have had a large, empty stage to work with, but filled it with every note that resonated out of the speakers. 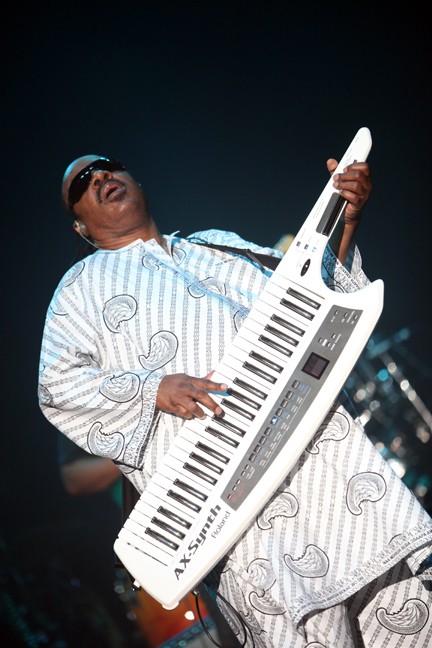 Stevie Wonder was definitely the highlight of the night and weekend so far. His music and talent are timeless. He walked on stage ripping into — of all things — a keytar and proceeded to play hit after hit. At the end of his set, he had a conglomerate of drummers — African, Native American, Japanese, etc. — hammering away for what seemed like a thankful eternity. Simply amazing. 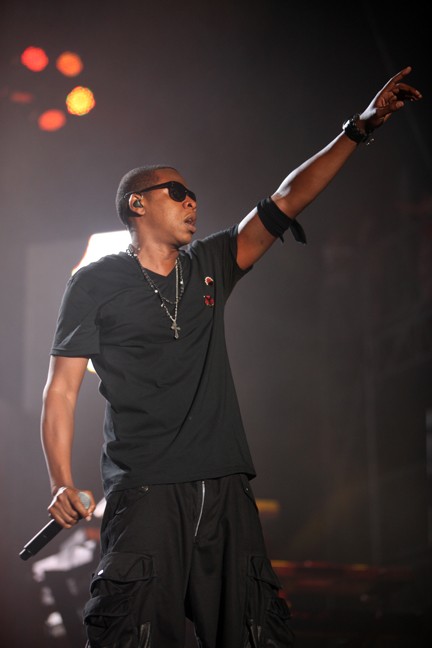 Jay-Z was up next, with a massive skyline-like LED backdrop, he seemed to soak in every ounce of energy from the massive crowd. Rumors of an appearance by Beyonce and/or Lady Gaga went unfounded. 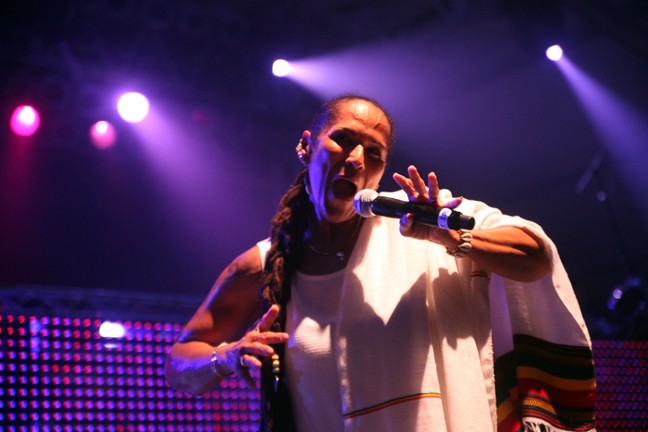 Thievery Corporation brought their eclectic music to That Tent at midnight. 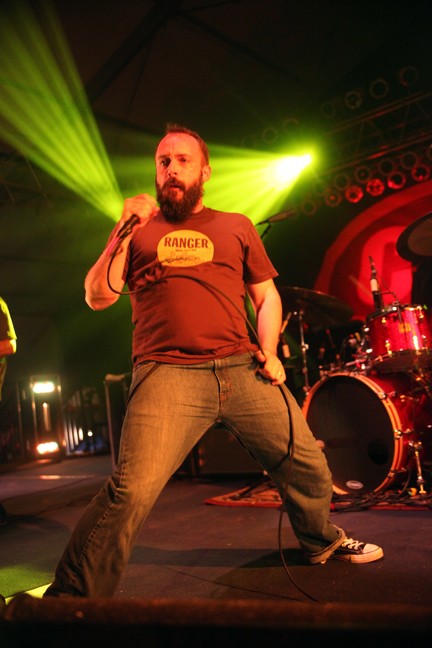 Clutch hit The Other Tent and threw everything they had at the crowd — a far different experience from the toned down blues jam of The Bakerton Group.

Deadmau5 performed in This Tent and proved that I am not a fan of techno. Seriously, I'm sorry, but it all sounds the same to me and every song is incredibly repetitive. He had a fantastic light show — but then again, who wants to stand around and watch a guy with two turn tables for an hour and a half? No photos to share because he set was so high I only got this photo of his DJ stand. 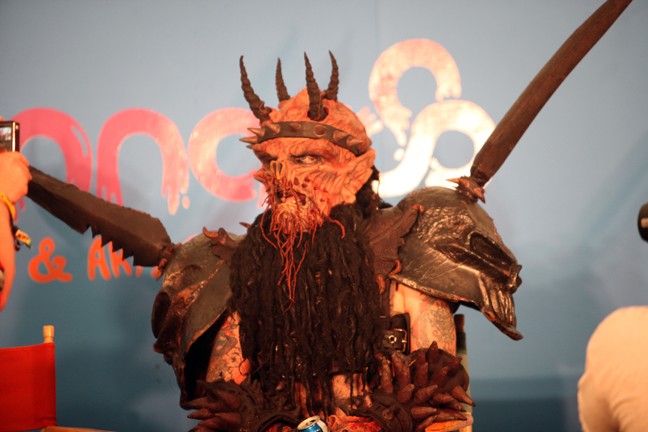 GWAR was in The Other Tent, in the meantime, spewing blood and various liquids onto the crowd. Again, no photos, but that's because I didn't want to ruin my camera in whatever said liquid was. Entertaining to watch, but after a while, the bad metal and launching of fluid gets a little old.

I've been trying to check out as many bands as I can, but still don't make it to all that I'd like to. I missed out on a great set from Langhorne Slim... didn't get to see Imelda May... and missed Charlotte's Paper Tongues. I also heard great things about a band called Dawes...