The 16 would-be actors and actresses have never had sex in front of a camera before (or at least shared the experience) and it will be up to an online voting congress to decide the winner, who will appear in a scene (read: "have sex with") Belle Knox. (Note: She says she'll do a scene with the winners, plural.)

When Charles Powells' friend died of HIV in the 1980s, he started working on an idea that could change the face of protection forever. Or at least its head.

The Galactic Cap is, essentially, a little cap you wrap around your penis' head that catches semen. All of your little dude's most sensitive parts are exposed, meaning you don't have to sacrifice pleasure for safety. Powell's Indiegogo campaign to help fund the product's FDA approval goes live in June.

As you kick off your weekend, ponder this ...

Just when you thought the bacon craze was on its way out the door, the guys who brought us bacon salt, baconnaise, bacon popcorn, bacon shaving cream and whole plethora of other bacon-flavored products have now released ... drumroll please ... bacon-flavored condoms.

According to J&D, the "meat-shaped and flavored condoms" are "of the highest quality latex." As an added bonus - and salty safety precaution - each condom includes "J&D's baconlube™ ultra premium water based meat flavored personal lubricant."

For $9.99, a pack of three fulfills your need to taste and smell like real meat when you bang.

And of course, a quick visit to the website this morning reveals they are out of stock.

What do you think? Too much?

I just saw the most amazing thing. As per usual and because of my big, kind heart, when I see something that makes my day, I feel the need to spread the joy around.

If we’re adhering to Rick’s definition of conservative, it no longer just means Scrooge McDuck greedy and uptight — it now means hateful and dictatorial. If one of those fetuses he brawls tooth and nail to protect grows up to be homosexual, its rights can go straight to hell in a rainbow basket!

Therein lays the irony and hilarity that some brilliant (probably gay) man or lady took the time to carefully craft his goofy visage out of “hard-core” wiener on wiener action. You aim to deny American citizens the right to marry the person whom they love and are committed? You’ve single-handedly decided to limit the options that the women of America have in the event of an unwanted pregnancy? OK, fine, you get dicks all over your face. Fuck on you dude ... literally.

Megan Henshall is a project coordinator by day, favorite child, rollerskating enthusiast, blogger, and lover of all things social and under appreciated. For more writing/ramblings/rants visit www.dearsuchandso-keyboardventing.blogspot.com.

A man is facing federal charges for slipping fake $10 and $20 bills to strippers at Club Onyx.

According to The Charlotte Observer, Derrick Moore was indicted on Wednesday for sticking the counterfeit cash in strippers' g-strings.

Moore faces charges of with uttering, or presenting, as well as passing counterfeit obligations or securities. It was not immediately known whether Moore has been arrested.

I can't help but wonder, when did the stripper know the money was fake — before or after the ink ran down her leg?

And is Moore such a regular at Onyx that the dancer(s) knew for sure he had given the phoney money?

Hard News Is there a sex life after a postitive HIV test?

You know your status and you're HIV positive.

Does that mean an active sex life is over for you?

Not necessarily. Being honest and following a few rules will allow an HIV-positive person to maintain a sex life.

According to Everydayhealth.com, the first step to maintaining a sex life with HIV is being upfront about one's status.

Have you heard the story about the 9-year-old Gastonia boy who said his teacher was cute and then got suspended from school?

He's been Herman Cain'ed, accused of sexual harassment and everything, and he's only 9. Here's the back story, as reported by WSOC:

Lockett said the principal of Brookside Elementary called her Wednesday to say the incident was a form of “sexual harassment.”

Emanyea told Eyewitness News a substitute teacher overheard him tell another student a teacher was cute.

The boy didn't touch the teacher and didn't even tell the teacher to her face that he thought she was "cute."

To explain their actions, the Gaston County School sent Lockett a letter explaining why a 9-year-old saying a teacher is cute constitutes sexual harassment.

In the letter, school officials say Emanyea Lockett said a teacher was fine in a suggestive tone. He said he told a friend she was cute.

The district says the comment is considered a form of sexual harassment.

What does a 9-year-old know about "suggestive language"? It seems that the adults are the ones with their minds in the gutter. Raise your hand if you never had a crush on a teacher while in grade school.

The holiday season usually brings thoughts of family and togetherness, but the Charlotte-Mecklenburg Police Department and the Mecklenburg County Women's Commission want to bring attention to domestic violence.

Read more about it on The CLog:

This year in North Carolina, 62 people have been killed by the hands of someone who was supposed to have loved them. 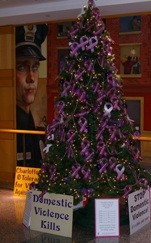 It's been 30 years since the discovery of the AIDS virus in the United States, and according to the Centers for Disease Control and Prevention, the South includes the largest number of people in this country living with or dying from HIV/AIDS.

Four out of ten (40%) Americans living with AIDS reside in the South.

In Mecklenburg County, an average of seven new HIV/AIDS cases is reported daily, according to The Regional AIDS Interfaith Network, or RAIN. Most of those cases affect African Americans.

African Americans are disproportionately impacted by HIV. African Americans comprise 68% of all new reported HIV cases in 2007, despite representing only 28% of the county's total population

That's why today, which is World AIDS Day, is such a red letter day.
Mecklenburg County HIV/AIDS Council has a host of events schedule for World AIDS Day, as well as free testing centers.

Read more on The CLog

A quick kiss in gym class may mark a 12-year-old girl as a sex offender.

Things sure have changed in schools these days.

Deputies said they were called to Orange River Elementary School after a girl kissed one of her classmates during physical education class last week.

The school reported the incident as a possible sex crime, and the Department of Children and Families was called in.

Investigators said the girl could be charged with battery if the boy didn't consent to the kiss.

How is it that sexual abuse in churches and universities can go on for decades and when kids do things that kids there's such a swift and forceful reaction?