Local musicians remember Charlotte venue on the eve of its closing 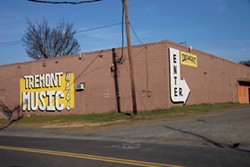 There's no telling how many bands have performed within the hallowed concrete confines of Tremont Music Hall. The popular music venue hosted just about every genre of music and everything from startup local outfits to national touring acts over the last 20 years. For many people, attending shows there has been a rite of passage from the teenage years to adulthood. Hell, I wasn't even living in Charlotte in the late '90s and my first concert in the area was seeing George Clinton at Tremont around the turn of the century.

In September, the venue announced it would be closing its doors for good on Dec. 19, 2015. The building has been sold and will be torn down to make room for future development.

So, what's it like to set foot on that stage? To see your first shows there? We reached out to a number of local musicians to share their thoughts about Tremont closing — as a fan of music, a performer or an employee. Here's what they had to say:

I owe a tremendous debt of gratitude to Tremont for bringing my beautiful wife, Jessica, and I together over a decade ago at a Ministry show. If it were not for Tremont, we would have never met. We are both also in the same band, therefore there would be no Baasthyrian! Thank you, Tremont. You will truly be missed! — Michael Banks (Baasthyrian)

There will be a definite void in the Charlotte music scene when Tremont's doors are no longer open. It will also instantly become one of Charlotte's most memorable venues, with 20 years worth of stories to be told for years and years to come. Anyone that ever contributed to making that concrete box a rock 'n' roll temple should feel proud. Every concert-goer, band member, employee and especially the three owners that held it up... Twenty years is huge victory for a Charlotte venue. For me, I think it's safe to say that I wouldn't be who I am today if it weren't for the years spent at Tremont... scrubbing toilets, booking shows, sweating bullets, meeting rock 'n' roll icons and forming lifelong friendships. There will never be another Tremont, but here's hoping.— Lisa Barr (gm/talent buyer at Tremont from 2004-2014)

Tremont is my home, They're family to me. What sets Tremont apart from the rest is just that. Most artists/bands can't call a venue "home," but I can. Most venues aren't as accommodating, caring and passionate about music as TMH has been for the past 20 years. I'm going to miss TMH, from the 137 degrees on stage at the Tech N9ne show, to being brought on stage with ICP to spray Faygo on fans one last time! ... And also walking out on a couple bar tabs and John Hayes still lovin' me. I love you guys! #GoodByeTremont #HomeSweetHome — F. Dux

Tremont Music Hall, to me at least, has always been the best place to watch not only myself, but many of my friends grow as musicians and performers. It's a staple of the Charlotte music scene, which makes every night just as exciting as the last, but it's also got a comforting, homey vibe about it that really lets you tear loose and never leaves you feeling nervous before setting foot on stage. I've never played another show that feels like a Tremont show. — Garrett Foster (Messenger Down)

Some of the first shows this band ever played were at Tremont... an audience of two while playing covers. Now, four years later, we're playing with a completely different lineup, pulling in 200-people shows and we've never felt more at home at this venue. To hear of its closing is a hearbreaking moment; we've been welcome at this place with open arms for so long now. I think I speak for every other artist that will be setting foot on stage one last time that this momentous occasion will be bittersweet, to say the least. — Adam Nelson (Something Clever)

It's one thing to lament Tremont's past, but I worry about the future. Tremont was one of the very few legitimate places for young kids under 18 to get introduced to the indie and punk community. When I discovered all-ages punk and hardcore shows at age 14, I instantly wanted to start a band of my own. That set me up for who I am now, and how I still think about the world. It gave me opportunities and empowered me. I hope kids have a place for a community like that in the future. — Evan Plante (Black Market)

I would say my favorite experience performing at Tremont Music Hall was playing our third birthday show there. It was our biggest local show to date and the first time we ever played on the big stage. It felt like a right of passage. I'd been going there religiously for four years before I played there. Most of the bands I loved growing up I saw there, so to play on those stages meant a lot. — Terrence Richard (Junior Astronomers)

I may not be the best person to ask about this, since I'm not a native of Charlotte, having grown up four hours east in Wilmington, North Carolina, but I'm going to try anyway. Living in Wilmington, Tremont was always a big thing, especially growing up in the metal/hardcore community, in the early '00s. In Wilmington, bands would always romanticize about making the trek out to play in Charlotte. I believe the first show I actually saw in Charlotte was A Closing Skyline's last show on September 2, 2005. The show was with Cambridge, Control, Hot Vegas and Within Reach and I remember there being two mosh pits and the place was packed. Maybe we've all gotten a little doughier, less angsty, in the 10 years since, but we still had Tremont, until now. Charlotte has a lot of things, let's not get it mixed up, but now we're losing one of the longest-running all-ages clubs in the city and that's definitely not a good thing. As I push 30 years old, maybe I don't get out as much as I used to, but the building still holds a lot of memories. The big thing I worry about is where kids that are under 18 will discover whatever fits in that spot of youth culture. Many towns suffer with this problem, but it was always great to know that maybe there was an option, in Charlotte, for someone who is 16, trying to figure out who they are as a person, going to a show.— Joshua Robbins (Self Aware Records, Alright, Late Bloomer)

I have seen SO many shows there, but the ones that stand out would be Rob Zombie, Black Rebel Motorcycle Club, Rollins Band, Ministry, AFI and KMFDM. They really got the memorable shows over the past 20 years!— Zoltan Von Bury (Lovesucker)

My favorite Tremont moments that come to mind were: 1) Meeting the band Squatweiler, who I became really close friends with and both of my bands at the time, Babyshaker and Snagglepuss, played lots of shows with. 2) Seeing Red Aunts on their final tour totally rocked my world. 3) Opening for Iggy Pop (Babyshaker.) That would be No. 1 on my list. He was super cool to us, and gave us great shout-outs and hung out in our dressing room. He is one of my few, true, rock idols. So, it was a crazy-cool night.— Scott Weaver (Miami Dice, Babyshaker, Snagglepuss)

I guess I could spout off any of the many exciting shows I've attended or played at Tremont Music Hall over the last 20 years. X, Antiseen, The Misfits, Batusi, Deicide and Hank 3 come to mind. I could probably list a few I hate myself for not attending — Iggy Pop and the West Memphis 3 tour also come to mind. But no, my most memorable moments weren't shows.

A little over two years ago, a friend of mine and a fixture in the music scene, had a birthday coming up. Rough year for my pal. Two very close friends of his passed away weeks apart, and he had a long-term relationship come to a painful end. If anyone needed a celebration in their honor, it was this guy. Being mutual friends with the folks at Tremont, I reached out to Lisa Barr and John Hayes who selflessly let me throw a surprise birthday party for my pal. With their help, we did just that. I'll never forget their generosity. Sadly, six months later, I stood on the Casbah stage, tearfully paying my last respects at the funeral of my friend's guitarist of 30 years. His birthday party, at Tremont, would be the last time I talked to him. It's fair to say that Tremont has provided a back drop for many of my memories over the last two decades. I cut my teeth playing music on their stage. I learned a lot in the crowd, on the stage, and even wearing a bouncer's shirt for a short time. It's absence is going to create one hell of a vacuum.— Jeff Williams (Biggy Stardust and His Wretched Hive)