It's always profoundly sad to watch a troubled artist melt down onstage. We’ve seen it with Scott Weiland, Courtney Love and Axl Rose, and we saw it Wednesday night when Fiona Apple's performance at the Fillmore in Charlotte turned into a train wreck of tragic and frustrating proportions. It’s not the first time Apple has gone off the rails on stage. Even at her most lucid, she’s an eccentric — and that eccentricity is part of the reason we love her and her music. 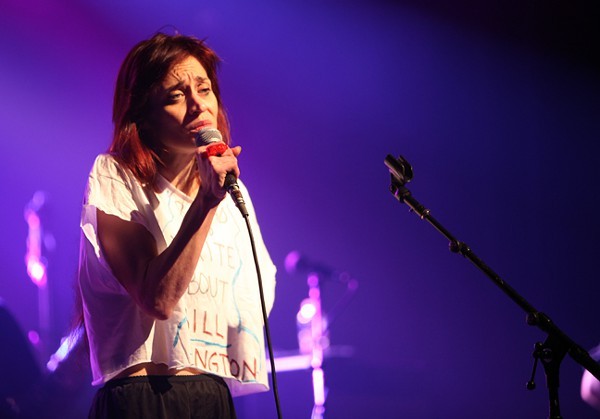 But when Apple appeared in the spotlight just after 9 p.m., more gaunt than ever, her face pasty and hair a dull reddish-brown, things went awry from the get-go. She warbled her words, couldn’t reach the high notes, couldn’t stay on the beat. She squirmed at her piano seat during the once-majestic and nuanced “Shadowboxer,” the third song of the night, as her voice totally blew out on the vulnerable line, “You have no reverence for my concern.”

The audience ate it up. People sang to all the words. They helped pick her up when she was clearly so very down. 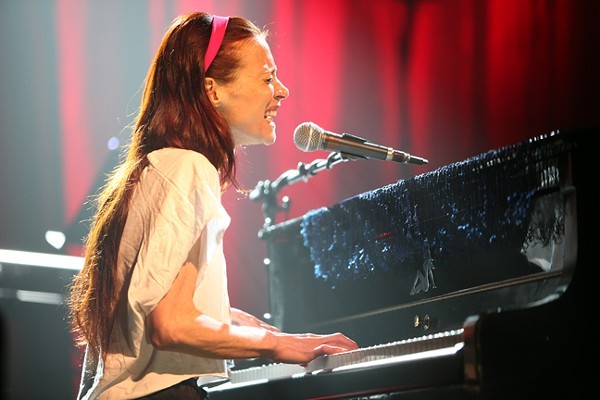 Apple tried to explain her erratic performance at one point. "I've been really fucked up all night,” she said, messing with her hair. Then she launched into a rant about how “the press” doesn’t give enough attention to men like Bill Addington, whose name she had scrawled on her white shirt. Who is Bill Addington? He’s a guy from Sierra Blanca, Texas, who's apparently involved in a fight against the dumping of radioactive waste. How does she know him? Who knows? But Sierra Blanca is the town where Apple was arrested last week on charges of possessing pot and hash. Why was she ranting about the injustice of Bill Addington not getting enough press from... um, music journalists, I guess? That was unclear.

At another point, Apple castigated the Fillmore for the TV monitors that line the walls. During the song “Daredevil,” a highlight of her latest album, she changed the words “I may need a chaperone" to "I may need to never fucking play here again.”

One of the ironies of Apple’s messy performances is that she is one of the more persnickety artists in the studio. Each of her releases — from her earliest post-Tidal album, the long-named When the Pawn Hits the Conflicts... , in 1999, to this year’s extraordinary The Idler Wheel Is Wiser — is marked by rich, musically precise yet emotionally raw and passionate performances. She’s taken long sabbaticals between projects and the results every time have been worth the wait. Her arrangements, her vocal parts, her lyrics and melodies all come from a musical mind that is as technically proficient as it is poetic.

And a mind that is as troubled as her musical genius forebears from Billie Holiday to Brian Wilson. Before launching into an angry and passionate — and very wobbly — “Get Gone,” Apple looked out over her microphone, her eyes bulging and then glazing over into fluttering blinks, like a cross between early Patti Smith and Holiday at her most unhealthy. “Stop it, I gotta get pissed,” Apple spat. It gave her the juice she needed to blow into lines like "so put away that meat that you're selling" and "It's time the truth was out that he don't give a shit about me" with all the hurt and rage of someone who could probably use more time with a loving friend than on the road in strange towns with audiences full of people who don't really give a shit about her, even if they love the artist.

About three-quarters into her hour-and-a-half show, Apple seemed to pick up some momentum. She steadied up; her voice was marginally less shredded on a handful of songs, including "Daredevil" and "Every Single Night," also from the new album, and "Not About Love," from her 2005 album Extraordinary Machine — though not by much. And her banter became slightly more lucid. Frustratingly, Apple's best performance of the night came in the last song: a cover of Conway Twitty’s "It’s Only Make Believe."

Then she was gone.

In short: It was sad, it was depressing, and it reminded me why I hate a music industry that continues to put artists on the road who need to be helped, not exploited.