A Mighty Wind, The Passage, SPECTRE among new home entertainment titles | View from the Couch | Creative Loafing Charlotte
Switch to the mobile version of this page. 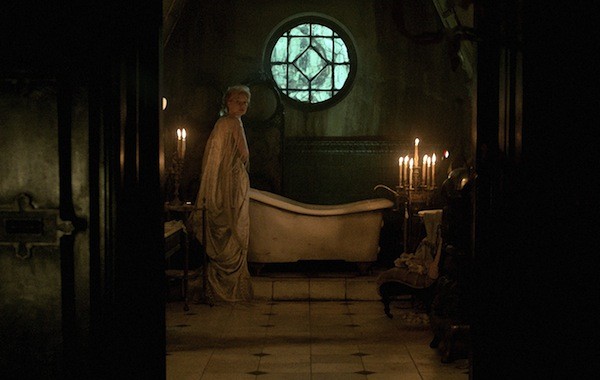 CRIMSON PEAK (2015). One of last fall's biggest disappointments, writer-director Guillermo del Toro's Crimson Peak will likely only appeal to moviegoers unfamiliar with Jane Eyre or Henry James or Bluebeard or Daphne du Maurier or, heck, even The Silence of the Lambs. Mia Wasikowska essays the role of Edith Cushing, an aspiring novelist living in turn-of-the-20th-century Buffalo with her protective father (an excellent Jim Beaver). Edith is visited by the ghost of her mother, who warns her to "Beware of Crimson Peak!" Edith can make no sense of the spectral suggestion, so she proceeds with her life, which, following the lead of any young protagonist in a bildungsroman, finds her leaving home for lands unknown. In her case, she tosses aside a colorless suitor (colorless Charlie Hunnam) for a mysterious Brit named Thomas Sharpe (Tom Hiddleston), marries this haunted man, and moves to his family home in England, where the couple will share quarters with his perpetually brooding sister Lucille (Jessica Chastain). But almost immediately upon arriving at this dilapidated, isolated estate, Emily is exposed to all manner of inexplicable sights and sounds. Del Toro clearly means for Crimson Peak to register as a throwback to classic films steeped in Gothic ambience, but he piles on the artifice to such an excessive degree that the entire project suffers from overbearing overkill. With the majority of its twists easy to deduce and the rest telegraphed far ahead of time, the picture isn't at all scary or suspenseful, but it also isn't remotely atmospheric, a shock considering the elegance of the costume design by Kate Hawley and the richness of the production design by Thomas E. Sanders.

Blu-ray extras include audio commentary by del Toro; a making-of featurette; deleted scenes; a piece in which del Toro discusses Gothic romance in film; and looks at the sets and costumes. 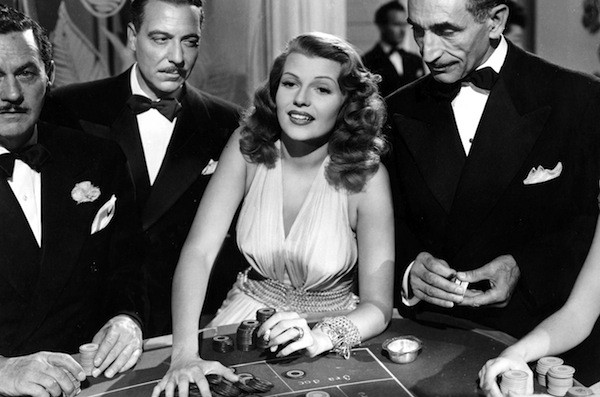 GILDA (1946). The most famous entrances in film history usually find the protagonist emerging from the shadows — think, for instance, of Orson Welles as Harry Lime in The Third Man, Harrison Ford as Indiana Jones in Raiders of the Lost Ark, or Arnold Schwarzenegger as The Terminator. Rita Hayworth as Gilda will have none of that — instead, she pops up seemingly from underneath the screen in full light, like firecrackers bursting skyward on the Fourth of July. And with that, Hayworth went from being a star to a superstar, the sexy, shimmering drink of water at the center of a down-and-dirty film noir-cum-psychosexual drama. The 1940s were a great period for sly innuendoes and cheeky double entendres in movies, and Gilda dances on the Production Code edge with reckless abandon. She's the temptress caught between two men who often seem to have eyes for each other more than for her: the wealthy, urbane crook Ballin Mundson (George Macready) and his loyal if opportunistic right-hand man Johnny Farrell (Glenn Ford). That Ballin carries a cane which shoots out a deadly blade — and that he calls his phallic cane his "little friend" (though, sadly, he never barks, "Say hello to my little friend!" as Al Pacino's Tony Montana would 37 years later) — is but one of the hints of the homoerotic content simmering beneath all the lusty shots of Ballin's wife (and Johnny's ex) Gilda tossing back her hair or sliding through a performance of "Put the Blame on Mame." The plot elements aren't always riveting — a staged death, tungsten patents as the designated MacGuffin, comic relief by Steven Geray's Uncle Pio — but the subtext of the pas de trois never disappoints.

Blu-ray extras consist of audio commentary by film critic Richard Schickel; interviews with filmmakers Martin Scorsese and Baz Luhrmann and film critic Eddie Muller; a 1964 episode of Hollywood and the Stars focusing on Hayworth; and the theatrical trailer. 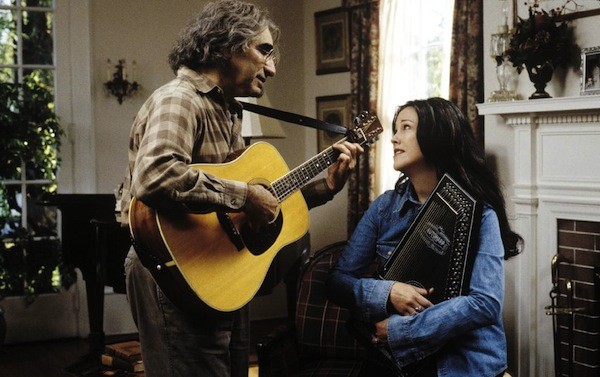 A MIGHTY WIND (2003). At the start of this ingratiating "mockumentary" from writer-director-actor Christopher Guest (Best In Show, Waiting for Guffman), music promoter Irving Steinbloom has just passed away, and to honor his memory, his son (Bob Balaban) has decided to organize a live TV concert that would bring together the three '60s folk groups that Irving had championed back in the day. The New Main Street Singers, led by a perpetually chipper couple (John Michael Higgins and Jane Lynch), are happy to take part, as are the three guys (Guest, Michael McKean and Harry Shearer) who make up Spinal Tap — err, The Folksmen. More problematic is the acquisition of the formerly lovey-dovey duo of Mitch (Eugene Levy, who co-scripted with Guest) and Mickey (Catherine O'Hara), since Mitch has suffered an emotional meltdown and endures life in a shell-shocked state. A Mighty Wind doesn't provide quite as many laughs as Guest's other comedies, yet the film offers an acceptable trade-off: There's a genuine element of poignancy surrounding the proceedings, and the lovely songs, all written by cast members specifically for this movie, add the icing on the cake. As an obnoxious band manager whose mouth travels a mile a minute but whose brain can only manage a yard a day, Fred Willard is back in scene-stealing mode ("Wha' happened?"); still, the performance that sticks is the one by Levy, whose work conveys a tenderness that momentarily slices through the satire. Levy nabbed the New York Film Critics' Best Supporting Actor award and clearly deserved an Oscar nomination; that failed to materialize, though the movie did land one for Best Original Song ("A Kiss at the End of the Rainbow," written by McKean and Annette O'Toole).

Blu-ray extras include audio commentary by Guest and Levy; deleted scenes; and the climactic concert in its entirety. 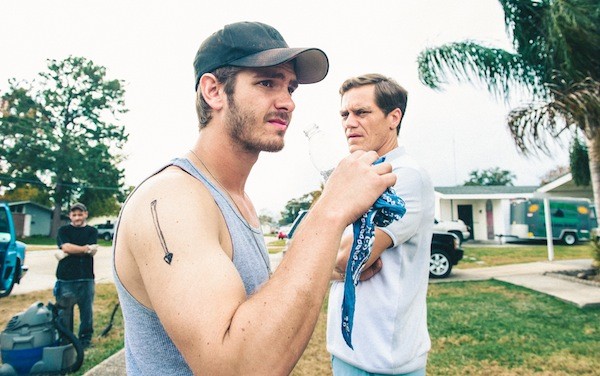 99 HOMES (2015). The latest from writer-director Ramin Bahrani contains arguably the most truthful snatch of dialogue found in any film released in 2015. "America doesn't bail out the losers. America was built by bailing out winners, by rigging a nation of the winners, by the winners, for the winners." (The Big Short would subsequently offer a full movie built around this line.) The person offering this bastardization of a snippet from Lincoln's Gettysburg Address is Rick Carver (Michael Shannon), a real estate maven who's explaining how the American Dream is pretty much stacked from the get-go. The person listening to this lecture is Dennis Nash (Andrew Garfield), a hard-working handyman who has recently been evicted from his home for falling behind on payments. The year is 2008, the housing market has gone belly up, and property swindlers like Carver are getting filthy rich while those around them are sinking without lifelines. Nash is luckier than most: He has a shot at success ... provided he's comfortable selling his soul by working for Nash and throwing people out of their homes. For most of its running time, 99 Homes is a harrowing drama, as ordinary folks are repeatedly stripped of their houses — when a befuddled elderly man with no family or friends is shown being evicted, it's almost unbearable to watch. Shannon is, as expected, terrific (after racking up well over a dozen nods from various groups, he was cruelly denied an Oscar nomination), so the surprise is Garfield. All wrong as the amazing Spider-Hipster, he excels here, convincing as a man whose basic decency is tested and compromised at every turn. Bahrani only falters heading into the resolution, when whopping coincidences and thuddingly obvious developments prove to be the order of the day.

Blu-ray extras consist of audio commentary by Bahrani and a deleted scene. 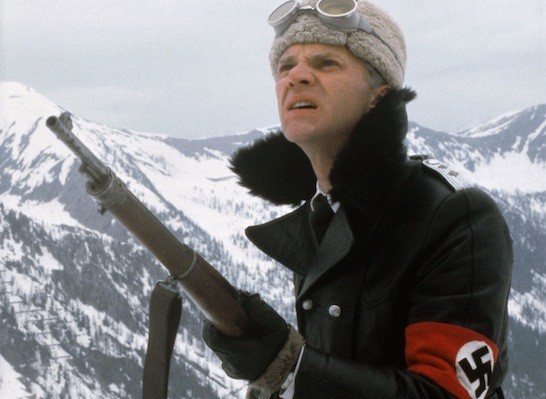 THE PASSAGE (1979). Even when I caught this film a couple of times overseas at the ripe young age of 14 (apparently, it played longer in Portugal than it did stateside, where it reportedly barely lasted a week in theaters), my teenage brain was developed enough to know that it wasn't particularly good. But with a decent hook that had been translated from page to screen (yes, I also read the source novel, Bruce Nicolaysen's Perilous Passage) and, more importantly, an impressive cast, it was an adequate way to pass 100 minutes. As an adult, its shoddiness comes even more into focus, yet it remains difficult to completely discard a movie that unites Anthony Quinn, Malcolm McDowell, Christopher Lee and Kay Lenz (whose turn in the landmark 1976 TV miniseries Rich Man, Poor Man had made me an instant — and smitten — fan). A World War II yarn from director J. Lee Thompson (an Oscar nominee for an infinitely better WWII film, the 1961 blockbuster The Guns of Navarone), this stars Quinn as a Basque shepherd who's hired by the French Resistance (repped by Gallic stars Michael Lonsdale and Marcel Bozzuffi) to safely guide an important scientist (James Mason) and his family (wife Patricia Neal, daughter Lenz, son Paul Clemens) across the Pyrenees. In hot pursuit is a psychotic SS officer (McDowell, shown at one point wearing a swastika-adorned jockstrap!) who will torture anyone who helps the fugitives, including the leader (Lee) of a gypsy caravan. Even an experienced scenery-chewer like Quinn is no match for McDowell, whose smirking, bug-eyed performance singlehandedly places the picture in the realm of camp and foreshadows his even more insane work in the same year's Caligula.

Blu-ray extras consist of an alternate ending (more like an extended ending); an entertaining interview with McDowell; a separate interview with Clemens (a fellow Famous Monsters of Filmland fan back in the day); and theatrical trailers. 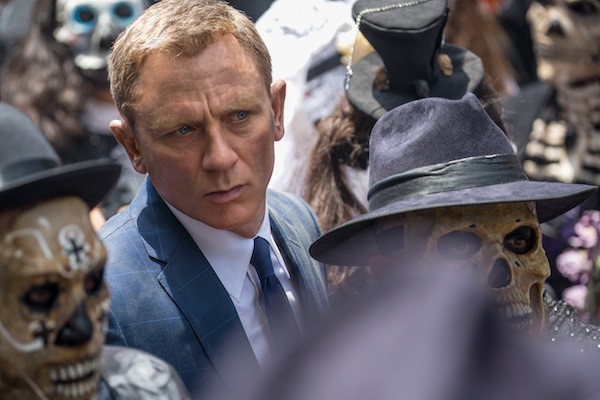 SPECTRE (2015). After a lengthy absence from the series, the league of extraordinarily evil gentlemen known as SPECTRE finds itself back for active duty in the 24th film in the established 007 canon — and, alas, the first Daniel Craig outing to qualify as a disappointment. The pre-credits sequence, set in Mexico City during the Day of the Dead celebrations, gets the movie off to an exciting start, with Bond's sleuthing ultimately uncovering a criminal network whose leader, Franz Oberhauser (Christoph Waltz), sports some interesting ties to his own past. Craig's previous Bond pictures — the superb Casino Royale, the criminally underrated Quantum of Solace and the supremely satisfying Skyfall — were all of a piece, with plot elements carrying over into each subsequent film and the movies working beautifully as a self-contained trilogy. The decision to shoehorn SPECTRE into that narrative proves to be a disastrous one, as a perfectly engaging — even exciting — two-hour film is then run into the ground for a wince-inducing final half-hour of unfortunate developments. The link between Oberhauser and Bond is moronic in the extreme, and the subsequent action set-pieces are alternately jumbled, silly and tiresome, with the final bang coming off as a pale whimper to that excellent opening. It's too bad, because what SPECTRE provides during its initial two hours is sound — and potent enough to still earn this a modest recommendation. While Guardians of the Galaxy's Dave Bautista (as the brutish henchman Hinx) is the only cast newcomer to make an impression — Waltz is shockingly bland as the Bond master villain, while Léa Seydoux is the dullest Bond woman in a long time — repeat performers like Naomie Harris, Ben Whishaw and, of course, Craig continue to register strongly. (For a ranking of all 25 Bond films before SPECTRE, go here.)

Blu-ray extras include video blogs focusing on director Sam Mendes, the action, the cars, and more; and a photo gallery.