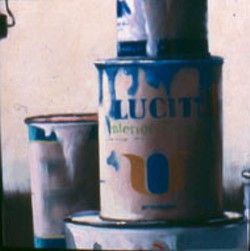 A basic premise behind the act of creativity is to take something and look at it in a different way. Through December 23 at Hidell Brooks Gallery, Still Lifes & Street Scenes features six artists taking fresh and interesting looks at various objects and places.

Thomas Tietjen of Quincy, MA, exhibits two series of works. In his paintings of used house paint cans, there's a surprising beauty on display. Whether Tietjen paints one can or several stacked on top of each other, each piece has the presence of sculpture.

In his second series, he paints pictures of name brand clothes (Old Navy, for example) draped on a clothes hanger or on a nail. But wait, isn't this advertising illustrations? Yet the more I looked at these works, the more they seemed to be about the composition used in presenting the folds in the clothes rather than mere commercialism.

Katy Schneider, who teaches at Smith College in Northampton, MA, also has two series on display. In her flower paintings, it's interesting to note how she manages to create a bloom with just one active brushstroke. Schneider also paints intriguing horizontal still lifes that only measure four inches high by 14 inches wide. These works are packed with objects: "With Red Bowl," for instance, features a purple pitcher, a reddish-pink bowl and an upside down yellow flower pot all standing behind a row of five McIntosh apples.

It's worth going to this exhibit just to see the work of Richard Crozier, who teaches at the University of Virginia. More than anyone else in this show, he manages to create pieces that look at something in a different way. At first, his work may strike some as amateurish, but as it grows on the viewer, it significantly begins to take on its own sophistication. Go see these pieces twice or, at a minimum, check them out when you first arrive at the venue and then look at them again at the end of your visit.

In one piece, Crozier has painted the Charlotte skyline from the perspective of the day-to-day grind. We see where the Panthers play as the backdrop for another work prominently centered on a yellow tractor. Crozier also shows us skyscrapers from the view of shipping trailers. In essence, he deconstructs power.

The three other painters in the exhibit are somewhat more traditional. The most interesting is Ben Aronson, whose oil paintings are fine examples of photorealism, as well as a bit more atmospheric than the output of the well-known Richard Estes. Aronson's oil "January Sleet/Downtown" paradoxically seems realistic yet clearly shows the abstraction in daily life: The lights of the cars are pure yellow dots showing through the sleet.

Carol Anthony, who lives in Santa Fe, paints items that look like exotic specimens pressed under glass, and she usually writes on her works in script. Her "Thick, Amazing Cloud" is especially effective as it rolls and rolls... and rolls.

The sixth painter, Charles Gatewood of AL, has become well known in Charlotte. His tiny "Telephone Pole" in egg tempera, which features a cropped building, is much more appealing than the oil paintings shown here, which are so dark they almost seem shellacked.

The exhibit Still Lifes & Street Scenes will be shown through December 23 at Hidell Brooks Gallery, 1910 South Boulevard, Suite 130. For additional information, call the gallery at 704-334-7302.