All Is Lost finds Redford at his best | Reviews | Creative Loafing Charlotte
Switch to the mobile version of this page.

All Is Lost finds Redford at his best

ALL IS LOST
**1/2
DIRECTED BY J.C. Chandor
STARS Robert Redford 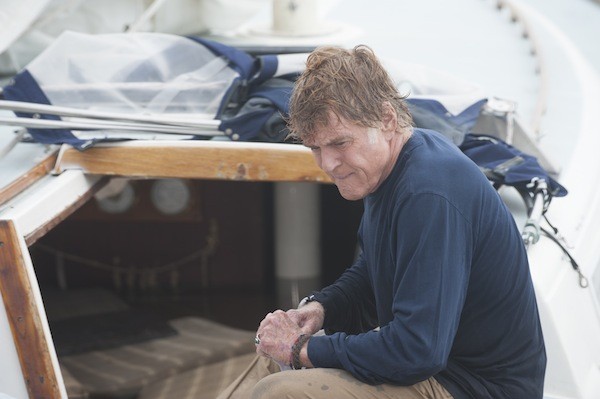 We don't know anything about the protagonist of All Is Lost, except for the fact that he's played by Robert Redford. We don't even know his name, since he's billed in the credits simply as "Our Man." What we do learn, though, is that he's in deep water, both literally and figuratively.

Somewhere in the Indian Ocean, this man is resting in the cabin of his yacht when it's suddenly struck by something. Upon investigation, he sees that it's a large shipping container just ... there, floating along in the middle of the sea. To make the sight even more surreal, its released cargo is floating all around it: tennis shoes, lots of tennis shoes. (Given the geographic location of this body of water, perhaps they're Nikes that the odious Phil Knight or his successors ordered to be produced by child laborers in Indonesian or Malaysian sweat shops? But I digress.) It turns out that the collision was strong enough to tear a sizable hole in the side of his boat, so he sets about repairing it as best he can. But will it be secure enough to withstand the upcoming storm, not to mention the other hurdles that fate places in his path?

Certainly, the plot will make it easy for some to tag this Life of Pi without the tiger, Cast Away without the volleyball, Gravity without George Clooney. But the script by sophomore writer-director J.C. Chandor (whose first picture, Margin Call, earned him an Oscar nomination for Best Original Screenplay) is far more threadbare and streamlined than those for the aforementioned films, unfolding like an existential one-man show in which an individual must rely solely on himself to survive, doing his best to pass the cosmic exam placed before him. Chandor takes this minimalist movie experience — one actor, scant dialogue, no significant sets aside from sea vessels — and makes it gripping for most of the 105-minute running time. The film could stand being trimmed about 10 or 15 minutes — not because it grows tedious (it doesn't), but because the dire predicaments piled on this poor man's head almost become comical in their quantity. A radio that's kaput, contaminated drinking water and a visit from a school of sharks are just some of the myriad troubles faced by our hapless hero — it reaches a point where I half-expected the yacht to somehow float all the way to colder waters so our hero would be forced to emulate Uncle Tom's Cabin's Eliza and cross multiple ice floes with wolves snapping at his heels.

Aside from a choice placement of the F-word, the only dialogue in the entire film is an opening voice-over in which Redford's character is apologizing to those in his life for his failings. It's a risky business not providing any back story for this character, meaning audiences will have to decide how much to invest in his plight. Is he apologizing for not being a good father? For not taking out the trash often enough? For embezzling funds? For hacking up a room full of nuns? The vacuum-sealed status of this man admittedly places some distance between him and viewers, although the presence of Redford in the role goes a long way toward closing the gap. Redford has portrayed so many immaculately groomed golden boys over the decades (Barefoot in the Park, The Sting, The Great Gatsby, etc.) that it's often easy to forget his success in earthier roles that take advantage of his all-American ruggedness (including Jeremiah Johnson and The Great Waldo Pepper, two fine '70s films ripe for rediscovery). All Is Lost highlights one of his best performances in this vein — stripped of words, he has to rely on actions and expressions to convey his character's frequent shifts between feeling confident and competent to combatting worry and fatigue. It's a strikingly physical performance, more so coming from a man who's 77, and it ably demonstrates that Redford hasn't lost a step over the course of his durable career.

All Is Lost is not showing in any theaters in the area.