All The Art That's Fit To Print 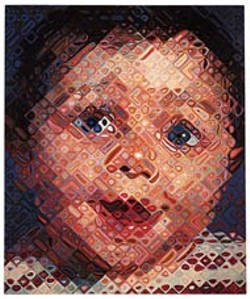 Thirty years ago, Chuck Close was merely a turncoat artist, a talented former Abstract Expressionist painter who had eschewed the loftier path of expressionist painting to pander to the market by producing super-realist portraits. In my capricious mind, Chuck Close was just another practitioner of mid-70s l'art du jour. What a difference three decades and a couple hundred prints can make.

Chuck Close Prints: Process and Collaboration is now showing through August 7 at the Mint Museum of Art. In this show of prints produced between 1972 and 2002, Close establishes himself as one of the few late century artists whose reputation in the history books is assured. He has also reduced my initial pissy dismissal of his talent to one more crumpled piece of paper and so added to my personal growing list of regrettable youthful pronouncements.

Eight distinct printmaking techniques employed by Close are explored in this show. Some of his printmaking methods sound familiar, including silkscreen and etching and woodblock, but none of his uses of these old forms are conventional. With each foray into a printmaking media, Close twists the bit between the horse's teeth. His wayward printmaking methods are never gratuitous but always a function of this goal, of working toward the image he has in mind. And, as he shows with each expository presentation on these walls, the process is also of critical importance, and the process must always intrigue Chuck Close.

The show begins where the artist began with prints — with a mezzotint in 1972. "Keith/Mezzotint" is, like all of Close's work, large — in this case, 52" x 42". No one had ever explored this size in the traditionally intimate and arcane medium of mezzotint, but Close wanted to try it. The three-month process in making the piece was difficult and sometimes discouraging for Close and Kathan Brown, his collaborator and guide through the process. What they ended up with was a seminal piece — painstakingly detailed, rich in black and white tones, and a record-breaking sized mezzotint.

In this piece are the seeds of all that is to come in Close's future printmaking. Here, for the first time, Chuck Close leaves the grid — his signature tool of trade — exposed. It's an early nod to the process, to the magic, and both an admission of its use and a method to dismiss the trick through acknowledgement. It says, "Done that and will keep doing that — let's move on. There are more interesting problems to wrestle to the ground."

Close stated, "This was the first piece where I allowed myself to deal with the increments as individual units which would not ultimately get pushed together to make a coherent whole: keeping the grid visible and thinking in bite sized terms, making an image in a square and keeping it in a square as well a whole." He compared it to knitting a sweater, where the segmented structure was never intended to be disguised.

Pulp-Paper multiples are my favorite Close prints. I like the bumpy, frothy finished look, and I particularly like his technique made so graphically intelligible through these thousands of tiny, once wet wads of tinted pulp. With these works, more so than any other technique here, it's easiest to grasp Close's dirt-under-the-fingernail methods for working out technical problems. These digitized portraits reveal his intricate, time-consuming and sometimes bizarre procedures.

"Phil III," 1982 (69" x 53-1/2"), was made using a grid from a fluorescent light fixture. With pulp paper composites, the material starts out wet. The aluminum light fixture grid keeps the wet wads of tinted colors discrete. A gray scale was determined by the artist, with each gray tone and each gridded cell assigned a corresponding number — a laborious and fascinating process. What results is a digitized portrait. At 20 feet, Phil looks like a photorealistic drawing or a photograph. As you approach the gridded wads, the surface becomes a tiny tile mosaic, a visual phenomenon commensurate to bringing your eye an inch from the TV screen. The piece forces you to see differently.

While making these pieces, wads of pulp were dropped on the studio floor. Close's reaction to the droppings is demonstrative of the paths his mind can take:

"While we were making the early pulp-paper pieces, I would drop blobs of pulp on the floor, and they would harden into miniature meadow muffins the size of Pringles potato chips. Eventually, there were hundreds of little chips in all the various shades of gray we had been using... The edges of these chips were beautiful — natural, irregular outside edges formed by gravity, not by artistic decision. So I went into the chip making business. I started making collages of them, gluing them on a canvas... I did a collage of Georgia."

"Georgia" is handmade paper, 56 x 44 inches. It is the face of a young girl assembled out of "meadow muffins" — wads of gravity splayed grey pulp culled from the floor. Up close it is a wash of black to white blobs on a bumpy surface. It best exemplifies why this show should be seen — because you can't quite look at things the same after seeing these "heads." Close reconfigures our way of seeing the visual world by dismantling and reconstructing his own, over and over again. He offers us a visual vacation requiring neither frequent flyer miles nor a guide in Timothy Leary.

"Georgia" was assembled using a brass shim grill, or template (like the aluminum florescent light template). Close designed the grill by tracing his original collage and enlisting a collaborator, his friend Joe Wilfer, to hand assemble the template. It took Joe a little under 400 hours.

Capturing a likeness was never much of a challenge to Close, but he never wholly abandoned that goal. He made the process more rigorous, continually harder on himself, the results ever more unexpected. He searched out novel solutions, but first he needed novel problems. Printmaking gave him that. The printmaking processes he explored, exploited and expanded opened doors for future artists, and for us.

We see "Emma," 2002, from the end of the hall leading to the Williamson Gallery — from 60 feet away. It's an enormous infant's face, huge even from this distance. As we approach, Emma's features dissolve into distinct vibrant pastel swatches of color.

This painting was translated into a 113-color Japanese-style ukiyo-e woodcut. Master printer Yasu Shibata took three years to complete the watercolor print. The painting and woodblock watercolor stand six feet from one another on adjacent walls.

The print is an amazing translation, but not an exact replica. The woodcut is a buoyant translation, a feat technically more brilliant than the original. But Close's painting is more radiant and luminous than the print. Of all the work here, this abstracted portrait of his niece is Close's most electric and engaging piece. It's where he has arrived and why you came to this show.

A late disclaimer here: I came to this show with a bias. In 1988, Chuck Close developed a blood clot in his head and became a quadriplegic. I came here biased because the man kept painting, initially using a brush between his front teeth. I know this sounds a little insipid, a bit boo-hoo and rah-rah: Brave artist barrels through catastrophe with true grit!

Biased I am, but this much is true: After the accident, the guy's work got better: looser, more inventive and experimental, and more inclusive — perhaps more inclusive by necessity. He reached out to his peers, his associates, his friends, and they became his facilitators. His collaborators enabled him to continue and to continue to improve.

This show is a joy to see and a boon to Charlotte.