All work and no pay 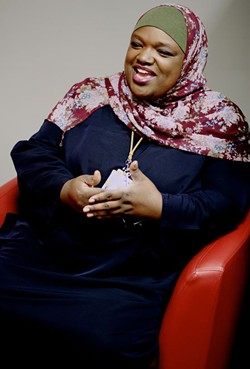 I'm weaving through a maze of nondescript concrete buildings, searching for my photographer and for our subject, Aprill Yakubu. It's hot, and I'm late. I call Yakubu for directions to her office space, but my cellphone reception is so bad I only hear every tenth word. As each wrong turn sharpens the edge in my voice, Yakubu calls me from a landline and tells me she won't hang up until I've parked and we've met on her floor. She sounds calm, happy, even — as if she's been leading lost souls her entire life.

Yakubu, 40, is a Mandarin language and world history teacher at East Mecklenburg High School. She is also an adjunct professor at Johnson C. Smith University, teaches an online course through the North Carolina Virtual Public School system and volunteers as a court-appointed child advocate. We're meeting at the communal office space she rents close to her home for $19 a month, a small fee for the quiet she needs to work. At home is her husband, their 2-year-old daughter and 4-year-old son, and Yakubu's sister-in-law and her daughter.

Along with being a mother and holding onto a handful of jobs at any given time, Yakubu has become the de facto spokeswoman for local educators who have grown frustrated with years of pay freezes and budget cuts. The Charlotte Observer once reported that Yakubu and her husband, who is also an educator, held seven jobs between them to make ends meet.

Her situation isn't unusual, nor does she sell it that way. She knows there are teachers around North Carolina, which ranks almost last among states for teacher pay, who hold two or three extra jobs to supplement their pay. Employees in the private sector are struggling too, she said.

"Teachers are really just ... depressed is the wrong word. Disappointed. At the whole process," she said. "Do [lawmakers] not see that this is affecting the whole community, the whole state?"

Educators have been so vocal in recent months, their compensation has topped the list of legislative priorities across the state, from the General Assembly to county commissions. But in many cases, attempts to supplement pay for the long term or fund bonuses seem to have been made in vain, Yakubu says. The Senate included in its proposed budget an 11 percent raise for teachers at the expense of tenure and teacher assistants. The House wanted to generate money for a 5-percent bonus through the lottery, despite warnings from the lottery commission that budget writers were anticipating an unrealistic amount of money.

Then on Wednesday, June 25, Gov. Pat McCrory and House Speaker Thom Tillis announced modifications to the House's budget that would redirect funds from different accounts and departments and the lottery to "[award] compensation increases to teachers, State employees and retirees." Teachers would get an additional 5 percent, new teachers would be offered a more competitive salary, educators with tenure wouldn't have to sacrifice their status, and funding for teacher assistants would remain intact. But the bill faces an uphill battle in the Senate; Speaker Phil Berger apparently "wasn't invited" to McCrory's and Tillis' press conference announcing the so-called mini-budget, according to Raleigh's News and Observer.

"It's a lot of promises," Yakubu said. "A lot of people shaking their heads going, 'Yeah, yeah, that's right.' But no one's actually doing anything."

A week before the June 25 announcement, the Mecklenburg County Commissioners narrowly approved a tax referendum to the November ballot that will ask voters to consider increasing sales tax by a quarter of a cent. If approved, starting next September 80 percent of the $35 million in proceeds is supposed to supplement Charlotte-Mecklenburg School employee salaries. A new commission next year could, however, direct the funds elsewhere — a fact commissioners who voted against the referendum warned of during discussions. But even some dissenting commissioners later agreed they would be remiss to redirect voter-approved funds.

"If the voters approve a referendum intending for the funds to go to CMS, the [Arts and Science Council], CPCC and the libraries" — other benefactors of the sales-tax increase — "then absolutely, that's where the money should go," Commissioner Matthew Ridenhour said in an interview with Creative Loafing. Ridenhour joined his fellow Republicans and one Democrat, Pat Cotham, in voting against the referendum.

Cotham's hand-shaking hand is sore when we meet at a Panera Bread off Providence Road. She had just finished attending about 14 high school graduations, "probably a new record." She said she broke away from the Democrats on the commission because teachers wouldn't reap the benefits of the tax increase until next year. "Teachers need help now," she said, adding that she would have supported a one-time bonus. "Why could we not have put some money in escrow and waited to see what the state was going to do?"

This isn't the first time the county and state have played a game of chicken. When lawmakers in the General Assembly cut funding for the drug-enforcement courts a few years ago, local court administrators successfully petitioned county commissioners to pay for it. (The judicial branch is supposed to be a state-funded entity.) Cotham said she is concerned the county is setting a precedent.

"I would say it's more following a precedent than setting one," said Commissioner Dumont Clarke, who supported the referendum. "Mecklenburg County has appropriated funds to the Charlotte-Mecklenburg School system to supplement the salaries of teachers and certified personnel for many years."

Another issue Cotham has with the referendum is the way it will be presented on the ballot, though the commission can't control the language due to legislative restraints. The request is simple, with no mention of who the boost would benefit: Are voters for or against a "local sales and use tax at the rate of one-quarter percent"? "The thing could likely fail," Cotham said. "This is going to bring out all the anti-tax people, which is going to hurt Democrats. Republicans will make hay with it. If you look at Facebook and Twitter, they're already starting. 'Those Democrats, all they do is tax, tax, tax.'" Joining the referendum on the ballot is a city-proposed $145,965,000 general obligation bond referendum, which could also confuse voters. "The November bond referendum for our Community Investment Plan asks voters to authorize use of taxes they are already paying," Mayor Dan Clodfelter wrote in an email. "These bonds do not require new taxes or tax increases."

Clarke says county commissioners knew about the referendum a week before it was voted on. At that time, he says, he didn't hear any opposition, nor did anyone propose alternatives. Asked whether he thinks the referendum will pass in November, he said he's "never been good at predicting the future. I think it's up to the people who vote to decide."

Clarke refutes the notion that relying on sales tax for something as important as supplementing pay is somehow taking a gamble or unusual, a point a few of the commissioners have made. "To suggest this is somehow a radical departure, it's not," he said. Though they took a hit after the 2008 recession, the trend for sales taxes "is more long term, as sort of a steady increase," he said. "Frankly, I would prefer that there be a more stable source of revenue, but those who are suggesting this is a volatile or inappropriate source of revenue certainly aren't the folks who would consider raising property taxes."

Not only is Yakubu a sixth- or seventh-generation Charlottean, but some of her enslaved ancestors helped build the city. Several are buried off Providence Road, their graves marked by trees.

Suffice it to say leaving home for good would be hard for her, but it's an option she has considered lately. The idea of a sales tax doesn't necessarily inspire her to stay. "Now I have to pay more taxes to get a raise? Am I really getting a raise?"

Yakubu repeatedly acknowledges that more than just teachers are struggling. Still, she doesn't understand why their campaign for raises has garnered negative attention from people who say they're just complaining. "We are one of the few professions who touch every single person's life," she said. "Everyone has that one teacher who inspired them."

Yakubu remembers hers: a professor who instructed her as an undergrad at UNC Charlotte. "Dr. Flowers, a little old white man with a long beard and glasses." Yakubu's long-time passion for Mandarin, which she picked up through high school courses, was so evident to Flowers, he encouraged her to study abroad in the country and even drove to Wake Forest University to request for his student a scholarship. She spent six months in Beijing on a full ride. Yakubu says the experience made her a global citizen. She eventually taught for two years in Dubai before returning to Charlotte in 2008 to teach at East Meck.

"I'll never forget that man for as long as I live."