Anatomy of a Murder, Scarlet Street, Unforgiven among new home entertainment titles | View from the Couch | Creative Loafing Charlotte
Switch to the mobile version of this page. 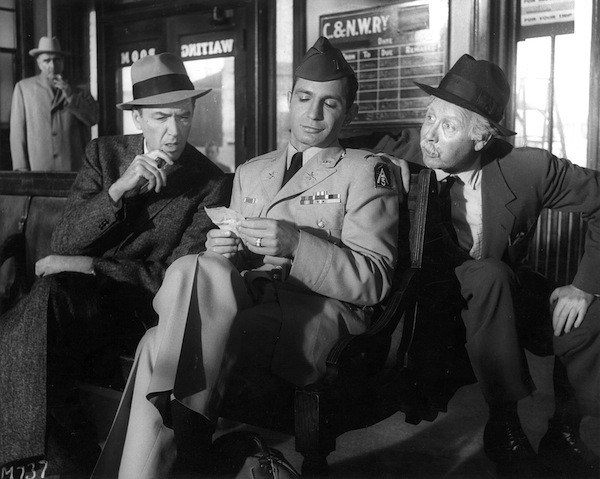 ANATOMY OF A MURDER (1959). A Molotov cocktail of a movie when it first appeared in 1959, Anatomy of a Murder was so controversial that audiences were taken aback by both its frank language and unexpected ambiguities, and Mayor Richard Daley even went so far as to prohibit it from playing in Chicago. The picture ended up not needing the Windy City: It proved to be a box office smash across the rest of the country, as moviegoers lined up to hear A-list actors utter such previously taboo screen words as "rape," "slut," "bitch," "intercourse," "panties" and (love this one) "spermatogenesis." Director-producer Otto Preminger, no stranger to ruffling moral-watchdog feathers, never succumbs to the sleaziness inherent in the material, instead turning out a highly intelligent and tightly controlled drama that still ranks as one of the all-time great courtroom procedurals. An excellent James Stewart stars as "humble country lawyer" Paul Biegler, who agrees to defend an army officer (Ben Gazzara) accused of murdering the bar owner he claims raped his wife (Lee Remick). At his side is his alcoholic friend and fellow lawyer (Arthur O'Connell), while helping out the prosecution is the slick assistant state attorney general (George C. Scott, making his mark in only his second year in films). And refereeing is the quick-witted — and often exasperated — Judge Weaver; in a casting stunt that works, he's played by Joseph N. Welch, the army lawyer who shot to national fame for his takedown of the despicable Senator Joseph McCarthy ("Have you no sense of decency, sir? At long last, have you left no sense of decency?"). Although the film failed to win any Oscars, it did manage to land seven nominations, including Best Picture, Actor (Stewart) and Supporting Actor (both O'Connell and Scott).

DVD extras include newsreel footage from the set; a new interview with Otto Preminger biographer Foster Hirsch; a new interview with critic Gary Giddins about Duke Ellington's score for the film; a look at the relationship between Preminger and the legendary graphic designer Saul Bass with Bass biographer Pat Kirkham; and excerpts of a 1967 episode of Firing Line, featuring a discussion between Preminger and William F. Buckley Jr.

JACK AND JILL (2011). In the cesspool of cinema known as the Adam Sandler Oeuvre. Jack and Jill certainly ranks near the very bottom; it's stupid and infantile, of course, but it's also lazy and contemptuous, a clear sign that Sandler and director Dennis Dugan (his seventh Sandler film; stop him before he kills again!) aren't even trying anymore, safe in the knowledge that audiences will emulate Divine in John Waters' Pink Flamingos and chow down on whatever dog doo is presented to him. Here, the stench is particularly potent, as this story about an obnoxious ad man (Sandler) and his whiny, overbearing sister (Sandler in drag) is a nonstop parade of scatological bits, prominent product placements, faux-hip cameos (Johnny Depp, welcome to the halls of whoredom), wink-wink chauvinism, racism and xenophobia, icky incest gags, annoying voices (not just Sandler as Jill but also the made-up language spoken by the siblings), and the usual small roles for Sandler's beer buddies (including, groan, David Spade in drag). Al Pacino co-stars as himself, inexplicably smitten with Jill; he provides the film's only two or three chuckles (especially a line about the Oscars), but even long before the sequence in which he raps about doughnuts, it's clear that he's become an ever bigger sellout than Robert De Niro. Now that's saying something.

Blu-ray extras include deleted scenes; a blooper reel; a piece on the cameos spotted throughout the film; and a featurette on Sandler's man-to-woman transformation.

THE RUM DIARY (2011). Johnny Depp has long worshipped at the altar of Hunter S. Thompson, so perhaps it's this idolatry that prevents him from acknowledging that The Rum Diary, an adaptation of a 1959 Thompson novel that wasn't even discovered until 1998 (reportedly by Depp himself), is a crushing mediocrity. As he did in Fear and Loathing in Las Vegas, the actor again plays a fictionalized version of the influential journalist — here, he's pre-gonzo Paul Kemp, a mild-mannered writer whose stint at a struggling American newspaper in Puerto Rico allows him to eventually discover his fire, his passion, and his desire to stick it to the "bastards." Unfortunately, fire and passion are just two of the elements missing from this arid, disjointed effort, which isn't presented as a shaggy-dog story so much as a flea-bitten one. Kemp's interactions with a cheery capitalist (Aaron Eckhart) and his beauteous fiancee (Amber Heard) are rarely believable, while Giovanni Ribisi delivers one of his typically twitchy — and typically awful — turns as one of Kemp's confidantes. Ribisi's histrionics aside, The Rum Diary is unbearably sedate — a Prozac picture when a touch of reefer madness would have helped.

Blu-ray extras include a behind-the-scenes piece and the featurette The Rum Diary Back-Story. 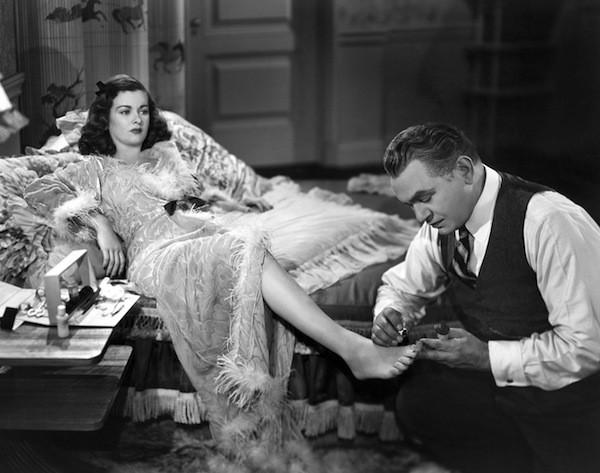 SCARLET STREET (1945). In 1944, the great director Fritz Lang gathered Edward G. Robinson, Joan Bennett and Dan Duryea together to create The Woman in the Window, which was such a rousing success that they re-teamed the very next year for Scarlet Street. The quartet knocked another one out of the park, producing a film noir so potent for its time that it was banned in Atlanta, Milwaukee and the entire state of New York. Robinson stars as Christopher Cross (no, not that Christopher Cross), a lonely and unhappily married clerk who falls for a brassy prostitute (Bennett), not realizing that she's in love with her pimp (Duryea) and that the pair are milking him for whatever cash he can earn or steal. (No, the film doesn't explicitly identify them as prostitute and pimp - the ratings board would never have allowed that - but c'mon, scene after scene makes it pretty clear.) Robinson is typically excellent as the humiliated patsy, while Duryea oozes charismatic sleaze out of every pore. Still, the men's roles are similar to those they essayed in The Woman in the Window, marking Bennett as the film's showcase star. A sympathetic character in Woman, she's a duplicitous femme fatale in this outing, callously wrapping Cross around her finger and eventually becoming involved with the most noteworthy ice pick until Basic Instinct came along decades later. It's a dynamic performance; it's no surprise that in his book Alternate Oscars, Danny Peary names her his Best Actress winner for 1945.

Blu-ray extras include audio commentary by author David Kalat; a photo gallery which includes a couple of images from deleted scenes; and trailers for other Kino Classics titles.

TAKE SHELTER (2011). Winner of two awards at last year's Cannes Film Festival yet shut out of the Oscar race, Take Shelter takes place in a spacious, wide-open Midwestern region but feels constrictive and claustrophobic at every turn. That's the intent of writer-director Jeff Nichols, who largely leaves it up to viewers to decide whether his film is a metaphor for the feelings of paranoia, persecution and dread that grip this nation in modern times or merely a story about a man who might be mentally unbalanced. Curtis (an excellent Michael Shannon), a blue-collar worker blessed with a loving wife (Jessica Chastain) and daughter (Tova Stewart), starts having dreadful dreams in which he's attacked by those closest to him (his spouse, his best friend, his dog) in the middle of a nasty storm. These nocturnal nightmares are soon joined by daytime hallucinations, and Curtis has to decide whether he's turning into a paranoid schizophrenic like his institutionalized mother (Kathy Baker) or whether he's having premonitions involving the end of the world. No one knows for sure — least of all the viewers — and while the story is such that Nichols could have ended it in a haze of ambiguity, he boldly elects to commit to a particular outcome. I of course won't reveal any particulars, so let's just say that Rod Serling would have been proud.

Blu-ray extras include audio commentary by Nichols and Shannon; a behind-the-scenes featurette; deleted scenes; and a Q&A session with Shannon and co-star Shea Wigham. 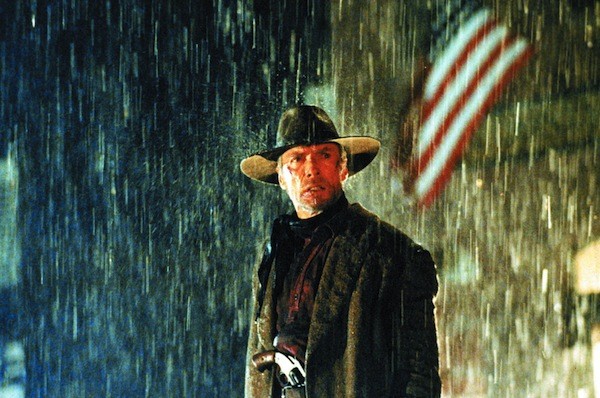 UNFORGIVEN (1992). The great Orson Welles once stated that Clint Eastwood was the most underrated filmmaker in America, and the sobering footnote is that the Citizen Kane auteur passed away in 1985, well before Eastwood began to be taken seriously as an artist by most critics and moviegoers. Even though he had directed 15 pictures over a two-decade span (including such attention-getters as The Outlaw Josey Wales and White Hunter Black Heart), it wasn't until he helmed Unforgiven that he moved into the front ranks of modern cinema's finest practitioners. Working from a powerhouse screenplay by David Webb Peoples (Blade Runner) that originally bore the unfortunate title The Cut-Whore Killings, the actor-director-producer crafted a superb motion picture that served as a fitting final chapter in his impressive Western canon. Eastwood stars as William Munny, a reformed outlaw and grieving widower who agrees to take a shot at the reward money being offered for killing two ruffians who facially disfigured a prostitute in the town of Big Whiskey. Munny embarks on the mission alongside his former partner Ned Logan (Morgan Freeman) and the upstart Schofield Kid (Jaimz Woolvett), and he eventually finds himself heading toward a brutal confrontation with Big Whiskey's sadistic sheriff, Little Bill Daggett (Gene Hackman). This unflinching drama definitively strips the West of its idealized romanticism and presents it as a savage hellhole in which there are no clear-cut heroes or villains, only morally ambiguous survivalists. Nominated for nine Academy Awards (including bids for Eastwood's performance, Peoples' original script and Jack N. Green's alternately gorgeous and gritty cinematography), this earned four: Best Picture, Director, Supporting Actor (Hackman) and Film Editing.

Blu-ray extras include audio commentary by film critic and Eastwood biographer Richard Schickel; a quartet of behind-the-scenes pieces; and a 1959 episode of the James Garner TV series Maverick, featuring Eastwood in a guest appearance as a rowdy cowboy.