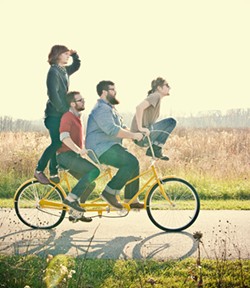 Take a folk-rock band with two members from the Charlotte area. Their first release is steeped in the bluegrass side of Americana and produced by Doug Williams. The next album leans more toward rock 'n' roll. As they get set to record its follow-up, the band decides to hit the road first and let things develop a bit more organically. Sounds kinda like the Avett Brothers, doesn't it? Close, but that's where comparisons end.

The sextet called the Apache Relay formed in 2009 at Nashville, Tenn.'s Belmont University. Only two months after meeting, the band recorded its debut album, 1988, as Michael Ford Jr. & The Apache Relay. Fast-forward two years and plenty of concerts later. The band establishes more of a collaborative writing process and as the music finds rock 'n' roll footing, Ford drops his name from the title and the band simplifies its name to the Apache Relay as it releases 2011's American Nomad.

Now, after taking the holidays off, the Apache Relay heads back out on the road, with new songs in tow. They won't hit the studio until later this year, but in the meantime, their tour will offer the chance to let the new material ebb and flow more naturally than under the pressure of being in the studio. The tour stops at the Visulite Theatre on March 2.

"This is definitely a time for us to try out some new tunes," Ford says by phone from Nashville. "Up to this point, we've always done everything for a record in the studio, so this is a cool opportunity for us."

Ford says the band is still finding its sound. He says 1988 feels like a completely different band and that Nomad is definitely closer to the Relay's current sound. "Rock isn't a bad word," Ford says. "It can be a cliche, but I think we're all really trying to make an ambitious album. I think it will go more toward rock and less of the roots aspect of the band, but you'll still hear a fiddle. We're really just testing the waters. We have a lot of ideas, and we're going to see what feels natural as we go along."

As with many bands, Apache Relay's strength is in its live show. The energy shines through much more than it can in a studio where you make a decision and get stuck with it forever. Being on stage allows the six band members to be much more open-minded and experiment with their sound.

"To me, at least, I think our sound is more palpable with speakers and sub-woofers making it easier to feel," Ford says. "I think there's a live element that's more spontaneous and exciting. We really hope to capture that energy and excitement for the next record."

That energy has also made 1988 nearly obsolete to the band. Ford says they struggle to play any tunes from that album live, though the band adapted some songs to its current sound.

"We're so drastically different than that album now," Ford says. "I'm in a completely different head space than I was when we wrote that record. It's a different beast. It feels like those songs are seeing less live time now."

Ford acknowledges the Avett Brothers connection to their sound, as well. He knows that some of the comparisons are tied to Apache Relay working with Doug Williams as well as their more acoustic style. There also the ties to the Charlotte area. While the Avetts are from Concord, Apache Relay guitarist Mike Harris and drummer Aaron Early are from Mooresville and keyboardist Brett Moore is from Wilmington, N.C. Ford and his guitarist brother, Ben, are from New Orleans and fiddle player Kellen Wenrich is from Philadelphia.