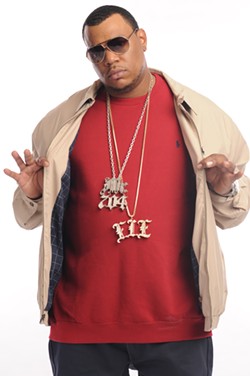 With Charlotte's continued emergence as one of the nation's fastest-growing and culturally evolving cities, it seems shocking that her urban streets have still yet to produce a serious hip-hop scene. That used to be the case for other major cities in the New South too, like Atlanta and Miami, but the rap wave washed over them around the turn of the 21st Century and they have been major players ever since.

Now, in a year when our nation turns its eyes to Charlotte for a political convention, people should also open their ears, because there are suddenly fresh beats and rhymes bouncing around the Queen City. And this could be the dawning of a new era of music in this sprawled out metropolis.

In recent years several artists have stepped up to fill a hip-hop vacuum, and some have been successful including Eyes of the Elders, undoubtedly one of the best hip-hop themed bands in the city. But the city is still lacking a lead dog - a culturally relevant solo rapper who makes fans think of Charlotte when they see him on 106 & Park or hear his new song on the radio, the same way fans associate Rick Ross with Miami, or Big Boi with Atlanta.

That all could be changing with the recent rise of several Charlotte MCs including Mr. 704, a self-assured rapper with a slowed-down style, purposefully raspy voice and effectively forceful rhymes puncturing through garish beats. His panache is part hardcore rap, part Gangsta rap, with Crunk tendencies and a vibe that feels at home in the Southern hip-hop movement. More importantly, he is ours.

His name derives from the area code of our phone numbers, and even his new album, Welcome to Charlotte, pays homage by inviting strangers into our burgeoning rap game.

And music was a staple of that childhood. "I grew up a fan," said Mr. 704. "With three older brothers I was constantly hearing different eras of music. There was always music being played in our home, and from three different types of people."

Around 10th grade, Mr. 704 began letting that music speak through him. "At first we were just joking around out in the hallways after lunch, or getting in trouble beating on the desk. After about 2000, I started to get serious and invested in some studio equipment, some keyboards and recording materials and really started focusing."

Originally part of the local group Fenced In, Mr. 704 went on to produce some solo projects and then bided his time releasing some independent CDs and taking his talent on the road. "I was just trying to get out on the road and let my music grind it. I didn't care if there is one person in the crowd or a thousand, you treated it like there is a thousand. Everybody has somebody who goes through what you go through, whether it is good or bad. There is someone out there who will feel you. And if I can reach at least one person each time, then I did my job."

Mr. 704 found success on the road, hooking up with the likes of Goodie Mob, Pastor Troy and Sean P of the YoungbloodZ. The diligent hard work impressed his fellow rappers, and now Khujo of Goodie Mob even appears on 704's new album.

And then Mr. 704 decided he was ready to come back and dominate a city in desperate need of hip-hop swagger and strong rap. "I did decide to bring it back home there were open arms for me," says Mr. 704. "I feel like the city is behind me right now, and we had 500 people at the CD release party."

The talent is there. The new single "Fast Cars" is a bombastic anthem with a video that features the Charlotte skyline in the background, while the song "Dreaming" is a smoothly lustful installment.

But it might not be for everyone, because 704's music is not the overtly political poetry-slam inspired underground flavor, but rather a type more suited in the club, or driving down I-277 with the windows rolled down and the music turned up. That's the sort that sells these days and, hopefully, the sort that takes the first step in putting Charlotte on the hip-hop map.

"I love the city of Charlotte," says Mr. 704. "I feel like it is only a matter of time before someone from Charlotte really catches that break. And if I can be that one, I want my name to be stamped as 'Mr. 704' to let people know I did this for the city and not just myself."