For her absent dad 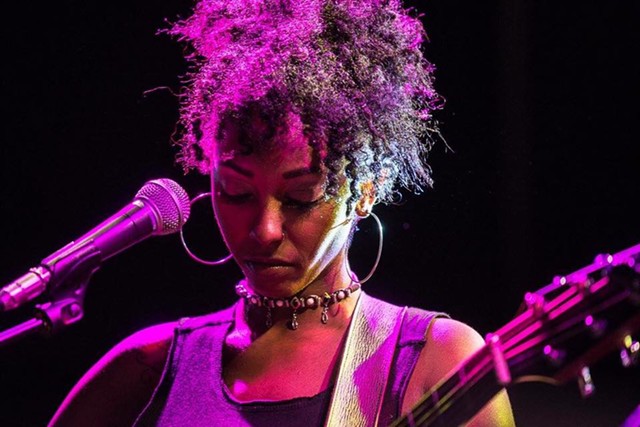 Arsena Schroeder was studying communications and sociology at Pfeiffer University in Charlotte when she got the opportunity to do an internship in Washington, D.C. While there, she bought herself an acoustic guitar and, in her spare time, began writing and singing the stories that were in her head.

It's a good thing. The singer, who performs under her first name, has a confident voice and strong, percussive guitar chops on her blonde Breedlove acoustic cutaway. Not only that, but she's a hell of a confessional songwriter. In "Elephant in the Room," from her 2014 full-length debut album For My Artist Child, Arsena offers up some real talk about growing up with an absent father.

"You said you'd come for Christmas — it's now March. You managed to never be here," Arsena sings over fingerpicked guitar and a swell of keyboards and percussion. Later in the song (which you can hear at the bottom of this interview), she comes in for the knockout line: "I know your objections, excuses and rage — but this is my song."

It's a sentiment many children of absent fathers can identity with, and on February 3, Arsena will perform "Elephant in the Room" at the Tosco Music Party, along with another talented local singer-songwriter, Jason Jet. (Go listen to this week's Local Vibes podcast with John Tosco for a chance to win tickets. The instructions are at the podcast link.)

We caught up with Arsena, 27, to find out what else she's been up to lately.

Creative Loafing: It's about time for some new music, isn't it, Arsena?

Arsena Schroeder: Yes, and I'm currently working on my second full-length album, which will be called Sleep Talking. In the time between the first one and now, I've recorded a couple of EPs, experimenting with new sounds and with co-writing, and just trying to deepen my songwriting abilities. I'm hoping to release it later this year.

What are your plans for the Tosco show?

So the first song we'll be doing is "Elephant in the Room," which is about the absence of my dad. It's kind of a downer, but it's one of my most-requested songs. It's a very transparent song about me processing the fact that we never really addressed the elephant in the room, which is that, you know... he wasn't there. I get a lot of feedback from people who were either kids who had an absent parent, or a step-parent who had to step in, because in the song I also mention the men in my life who have stepped up.

The second song is one Jason wrote that's a great response and follow-up to mine, called "When I'm Gone," which talks about him being absent. So it's a really cool way to collab and bring our art together around this topic.

You worked on Capitol Hill during college, and that's where you started performing. How did that come about?

I was going to be interning at C-SPAN, but I decided to go with a smaller organization, because I have an entrepreneurial spirit and I really wanted to see how they did things. I also had a lot of time while I was there, so I decided to order a guitar and teach myself to play, and that kick-started my songwriting. I didn't start out thinking I would be a songwriter, but I had a lot of songs in my head and didn't know what to do with them.

Two months later, I ended up getting a gig opening up for a band at [D.C. coffee shop] Ebenezer's and then I was in Bolivia and got a chance to play there. It was around then that I thought, "Wow, I'm really enjoying this and my music seems to resonate with people."

You were in D.C. — did you ever write any political or protest songs?

Oh, no, I've never been very political, although I probably should be. My music has always been more inspirational. I like to talk about what I'm processing or learning in my own life. There was a lot of scripture intertwined in my music then, because that was where I was at the time. So it was more faith-based and inspirational; reflective, revelatory type of things.

You play acoustic guitar, and the music on your first album is nice mix of folk and acoustic soul-type material. Are your newer songs in the same vein?

Acoustic music is my sweet spot. That's what I'm most comfortable with. But when it comes to recording, I've evolved. The acoustic sound works great for some of my live settings — and for the Tosco event, I'll be doing an acoustic set — but on the recent EPs I've experimented with beats and electronics. So for the new album we're working to pair those sounds together in order to have a more mainstream appeal — with a lot of sampling and digitally based music — while still remaining true to my art and still having an acoustic presence, too.

Listen to "Elephant in the Room":