Art With Heart Returns to its Roots

Back to where it started from

Art With Heart, the yearly winter fundraiser held by local domestic violence and sexual assault service nonprofit Safe Alliance, has made a real impact over the last 17 years.

In that time, the event has surpassed $1 million raised through art auctions. As time went on, though, the event also went through a change, leaving its original home in NoDa for the more posh setting of Founders Hall in Uptown Charlotte.

Organizers noticed that Art With Heart had become less crafty and more cosmopolitan, so this year they decided to switch things up and get back to the basics.

On February 24, for the 18th annual Art With Heart auction, the event is "going back to its roots," as multiple organizers have put it. That starts with a new home in its original neighborhood: CenterStage @ NoDa. But that's not all.

"Everything is different. Literally everything: the caterer, the venue, the lighting, the entertainment, the auctioneer," says Carol Shinn, director of community engagement at Safe Alliance. "It started back in NoDa years ago and had progressed to the point where it was a corporate gala style, and now we're returning back to the roots and having it more accurately reflect the people that we serve, which is everybody." 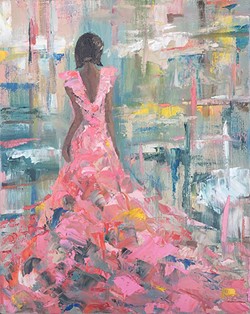 Organizers wanted to make the event more inviting to everyone, so they're including a more diverse group of artists at the auction, Shinn says.

While continuing work with the galleries they've worked with from the beginning, organizers also brought in Alexys Taylor, collections and exhibitions manager at Harvey B. Gantt Center, Art With Heart's museum partner, to diversify the featured artist list.

"We are cross-marketing in order to fully include all sectors of Charlotte-Mecklenburg in our mission," Shinn says. "Alexys has been instrumental in helping us secure new artists this year, which we hope will propel Art With Heart all the way to our 20th year in 2020."

For first-time committee chairperson Amanda Cannavo, the focus on diversity is important if organizers want the event to be more than just a chic, black-tie affair, but to truly honor the mission of Safe Alliance and the people they work with.

"I think it supports the message of Safe Alliance; sexual assault and domestic violence does not discriminate," Cannavo says. "It doesn't matter if you're male, female, if you're black or white, if you practice a particular religion. When you look at a piece of art, you don't know just from the piece of art whether or not [the artist is] black, white, Hispanic, whatever, and that mirrors the message about how sexual assault and domestic violence are diverse issues."

The reflection of the Safe Alliance mission in art is something Sonya Pfeiffer, owner and creative director at Elder Gallery of Contemporary Art, took into consideration when selecting what pieces her gallery would donate to the auction.

The first piece Pfeiffer selected is from Javier López Barbosa, a popular abstract expressionist from New Mexico. Pfeiffer says she chose Barbosa because she knew he would sell, but there was also something that jumped out at her from his painting, "Discovering."

In the painting, a blotch of red stands out in the right center of the canvas, swimming in a sea of blues and greens. To Pfeiffer, the red shape represents a heart.

The second piece Pfeiffer selected is Marlene Rose's "Copper Blue Butterfly." Rose is a glass artist from Clearwater, Florida. Pfeiffer says she chose Rose's piece not only to represent a new priority of the gallery — she's showcased fine glass art since taking Elder Gallery over from Larry Elder last year — but because of what the butterfly stands for.

"That imagery of something that represents transformation I felt like was an appropriate donation," Pfeiffer says. "It is a beautiful piece that also has a masculine appeal and a feminine appeal. When we talk about issues of domestic violence and sexual assault, generally speaking we are talking about male/female interactions. And so I also like that it has that quality to it — a sort of recognition that we are talking about relationships and hopefully we're talking about transformation."

Not all of the pieces featured in Saturday's event will have a connection — subtle or otherwise — to domestic violence or sexual assault.

About 100 artists have donated approximately 175 pieces of art to be sold at both a live and silent auction on Saturday. The topics in the art range from the Women's March to the recent solar eclipse. Railroad ties taken from the scene of a train accident that occurred years ago frame one piece.

Sybil Godwin, owner of Shain Gallery, is donating six pieces to Saturday's auction. Working with Safe Alliance is all the more meaningful to Godwin as the owner of a gallery founded by a woman, which employs exclusively women. Godwin says the use of art to raise funds for victims of domestic violence and sexual assault is something special, and a reason Shain Gallery has been a part of the event since its founding.

"I think art anywhere is a mood changer. It's very uplifting," Godwin says. "And that's what I think is so neat about the combination of this art event and Safe Alliance: that you're celebrating art that makes you happy. That's what Safe Alliance is trying to do, they're trying to uplift women."

However, as first-time Art With Heart committee members Ally Frazier points out, art has a connection with this issue that goes beyond fundraising. Some of the artists who donate to the auction have gone through domestic violence, others have watched their loved ones go through it, she points out.

"People that have experienced domestic violence, or people that have seen it secondhand, this can be a way that they express themselves," Frazier says. "I think it's important for the community to support the community, regardless of what it is, but in this specific instance it's kind of unique in that it can be used as a form of not just therapy but expression that is proven to help people work through things and get through their emotions.

"Especially in light of the recent movement, things are much more vocal now, and people are becoming more confident in speaking for themselves," Frazier continues. "But art's been around forever, so a lot of times you might see something expressed in artwork that an artist may not feel comfortable verbalizing, but instead they paint it or they draw it."

Many of the featured artists will be on hand for an hour-long reception at the beginning of Saturday's event, which will allow them to discuss their pieces with those in attendance. However, Pfeiffer hopes that people attending the event on Saturday will be able to make their own connections while perusing the gallery, without having to know what emotions or experiences went into them.

"There's a special thing about art," Pfeiffer says. "It's not words. I think when you take away words — whether they're written or spoken — you allow for so much personal interpretation. Everyone looks at an art piece and has a different takeaway and a different experience and an emotional reaction or response. I think that's the larger importance of art and something like the Art With Heart auction: lifting art to this higher level of not just something that can make money but something that represents a larger importance."

Cody Hughes is a local photographer who is donating to Art With Heart for the first time this year. Hughes' sister has struggled with Type 1 diabetes since the time she was 2 years old, and he's grown up heavily involved with charities — mainly the Juvenile Diabetes Research Foundation.

When Hughes moved to Charlotte two years ago, he didn't know anyone. He started taking photos with the hopes he could one day use the art to help in his charity work. After selling some photos and donating the proceeds to SHARE Charlotte during Giving Tuesday, he became more interested in art's relation as charity. When he heard about Art With Heart just a few months ago, the idea was a perfect fit.

"I think it's good for everyone in Charlotte to see things like that happen," Hughes says. "It helps the whole arts scene, which can help Charlotte grow culturally. People always say they want to see Charlotte develop a better arts scene, so to have an arts scene and a charity scene working together, that definitely can't hurt."