Back to the Future box set and 3-D The Stewardesses among new DVD reviews | View from the Couch | Creative Loafing Charlotte
Switch to the mobile version of this page. 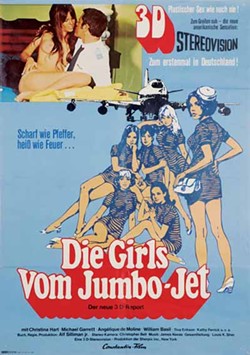 BACK TO THE FUTURE (1985) / BACK TO THE FUTURE PART II (1989) / BACK TO THE FUTURE PART III (1990). In 2002, Universal released Back to the Future: The Complete Trilogy, a superb box set that contained all three titles in the popular film franchise as well as over 10 hours of bonus material. The studio has now seen fit to re-release the movies on disc, but be warned that, for the most part, this is the exact same package as before, with a lamentable downside being that the titles are no longer bound together in a single box but must be purchased individually. The only difference (besides the packaging) is that the first film now includes a second disc with even more additional material: a simulation of Universal Studios' now-closed Back to the Future: The Ride, a 46-minute, nine-part retrospective documentary, a 1989 TV special hosted by Leslie Nielsen, and an interview with series star Michael J. Fox. As for the movies themselves, the 1985 original, in which high school student Marty McFly (Fox) cruises back to 1955 in a DeLorean time machine built by the eccentric Doc Brown (Christopher Lloyd), remains the best; the middle entry, in which the pair head forward to 2015, is the most underrated (like fellow second child Indiana Jones and the Temple of Doom, it had to contend with doltish charges of being too cold); and the third entry, which blasted the two back to the Old West of 1885, is the most conventional.

Among those 10-plus hours of extra features carried over from the 2002 set are audio commentaries by writer-producer Bob Gale and producer Neil Canton; interviews with Gale and series writer-director Robert Zemeckis; deleted scenes; making-of featurettes; pop-up trivia facts; and music videos for Huey Lewis and the News' "The Power of Love" (from Part I) and ZZ Top's "Doubleback" (from Part III).

BLINDNESS (2008). After the back-to-back helming of two excellent motion pictures – City of God and The Constant Gardener – Fernando Meirelles seriously stumbled with his adaptation of Jose Saramago's Nobel Prize-winning novel Blindness. In this film's unnamed city (the country and characters are similarly anonymous), the disaster is a lack of vision that affects a significant number of citizens; since it's not what we assume to be normal blindness – the victims state that all they see is white, not black – the afflicted are quarantined. One of those infected is a doctor (Mark Ruffalo) who's ordered to a containment facility that will soon be harboring others who have been struck blind. The doctor's wife (Julianne Moore) still retains her eyesight, but not wanting to be apart from her husband, she feigns blindness in order to travel with him. In a variation on the theme that "in the country of the blind, the one-eyed man is king," the wife turns out to be a powerful figure in the ward, as her vision allows her to better help those around her. Given the material's expansive canvas, the film ultimately feels too claustrophobic in its scope, and while I imagine the source material (which I haven't read) manages to draw up some interesting parallels between the disease and our society's inability to "see" what's around us, the film merely operates on one plateau, drawing more commonplace comparisons to other literary sources like Lord of the Flies and Animal Farm. Despite strong performances and a few compelling scenarios, it's plain to see that Blindness doesn't quite measure up to expectations.

COLUMBO: MYSTERY MOVIE COLLECTION 1990 (1990). The character of Columbo, the detective whose disheveled appearance concealed his agile mind and often lulled the killers into a false sense of security, was such an integral part of the landscape of 1970s television that it's a bit startling to hear one movie in this assemblage open with the use of Fine Young Cannibals' "She Drives Me Crazy," or to note in another entry that Columbo checks for sporting odds in a copy of USA Today. But while the original run of the classic Columbo series may have ended in the late '70s, that hardly signaled the demise of the character, as star Peter Falk again donned the trenchcoat and cigar stubs for 24 TV-movies made sporadically between 1989 and 2003. The 1989 compendium exhibited a dip in quality from the program's heyday, but this collection of six flicks finds the rumpled detective again tackling cases worthy of his talents. Some of the works here take risks by messing with the long-established template of the series, but they manage to pull it off: Columbo Cries Wolf, for instance, finds the detective (for once) barking up the wrong tree; Murder in Malibu doesn't reveal the killer until the end; and Rest in Peace, Mrs. Columbo finds the intrepid sleuth the target of an elaborate revenge scheme. All six mysteries are satisfying, and age hasn't slowed Falk down – he's as wonderful as ever as the top cop.

The only extras are promos for other shows on DVD.

MADAGASCAR: ESCAPE 2 AFRICA (2008). Anyone who thinks that the Madagascar franchise is all about the Benjamin (Stiller, that is) has seriously overrated the importance of marquee names to animated flicks. With rare exception (say, Eddie Murphy in the Shrek works), the most memorable cartoon characters have nothing to do with A-list casting (who even remembers that Bruce Willis starred in Over the Hedge?) and everything to do with matching the tone with the toon (what superstar could have done better than relatively unknown Patton Oswalt as Ratatouille's Remy?). So while the casts of Madagascar and this sequel are headed by Stiller, Chris Rock, David Schwimmer and Jada Pinkett Smith, it's really all about the penguins, baby. Certainly, Stiller (as Alex the lion), Schwimmer (Melman the giraffe), Pinkett Smith (Gloria the hippo) and especially Rock (Marty the zebra) do their part to make these movies two of the few tolerable non-Pixar/non-Miyazaki toon tales of recent times, but what truly blesses the pair is the presence of the flightless fowl. Led by Skipper (voiced by Tom McGrath, co-director of both films), these penguins are among the least sentimental of all animated characters in the history of the film medium. If this follow-up isn't as good as its predecessor, that's largely because the warmed-over central story line, largely lifted from The Lion King, has to compete with various other plot threads so diffuse that no real narrative momentum is ever established; there's a rushed sense that wasn't present in the first picture. But whenever the penguins pop up for their welcome routine, the movie takes flight.

SHADOWS (1959) / FACES (1968). Two of the movies featured in Criterion's gorgeous 2004 box set, John Cassavetes: Five Films, have been released as stand-alone titles. As I wrote when reviewing that set, "John Cassavetes has often been pegged as the father of independent cinema, yet clearly he remains removed from today's breed of indie filmmakers, whose products generally lean on corporate sponsorship far more than Cassavetes' output ever did. Taking the money he earned from co-starring in Hollywood films like The Dirty Dozen and Rosemary's Baby, this edgy innovator would then turn around and self-finance his own pet projects. Hailed as 'life-changing' by fans and 'self-indulgent' by detractors, Cassavetes' movies inject themselves under the skin and either produce a pleasurable buzz or a maddening rash – depending on one's point of view." Shadows (1959), his startling debut piece, began as an acting workshop exercise and morphed into a movie that, when broken down, isn't even about its central plot thread (an interracial romance) as much as it's about capturing the jazzy milieu of late-1950s New York. Faces (1968), meanwhile, centers on an emotionally errant marriage, as bickering spouses (John Marley and Lynn Carlin) contemplating divorce embark on affairs with, respectively, a prostitute (Gena Rowlands) and a swinger (Seymour Cassel). Along with 1974's A Woman Under the Influence, Faces proved to be Cassavetes' most popular movie among critics, art-house audiences and Academy members (earning nominations for Cassavetes' original screenplay and supporting players Cassel and Carlin).

Extras on the Shadows single disc include video interviews with actress Lelia Goldini and associate producer Cassel; 16 mm footage of the Cassavetes-Lane Drama Workshop; and a restoration demonstration. Extras in the two-disc Faces set include the 42-minute documentary Making Faces (2004); an 18-minute alternate opening sequence; and a 2004 piece in which cinematography Al Ruban discusses his work on the film.

THE STEWARDESSES (1969). Back in 1969 and throughout the early '70s, The Stewardesses became a smash hit not only because it was a softcore sex flick but because it was a softcore sex flick in 3-D. During a period in which cinematic standards had been loosened and hardcore porn was just around the corner (Deep Throat and Behind the Green Door, both 1972), the makers of this film found an ingenious hook by reviving the 3-D craze of the 1950s and employing it in the service of a skin flick. The Stewardesses was an instant success, and (as explained in one of the bonuses) in order to add a "message" and thus lessen the chances of its makers being hauled into court at some point for debasing moral standards (as happened with Deep Throat), additional scenes involving a semblance of a story line were filmed and added during its run. The main story line, however, is wafer-thin: A group of shapely flight attendants spend their downtime getting drunk, getting high and (especially) getting laid. The Stewardesses is largely worthless as a movie but utterly absorbing as a relic of its time, with many scenes more risible than titillating (e.g. a woman has sex – sort of – with a lamp). As for the three-dimensional aspect of the project (the characters themselves remain woefully two-dimensional), the two-disc set includes both the color and black-and-white 3-D versions of the movie (there's also a 2-D color version, but what's the point?). As noted in the enclosed booklet and on the DVD menu itself, the 3-D is a bit crisper in the b&w version (protruding objects include a pool cue, wine glasses, a bedpost, and – oh, yeah – boobs), but don't watch either version expecting Beowulf or Coraline quality.

In addition to two enclosed pairs of 3-D glasses, extras in the set include a making-of piece featuring interviews with cast and crew members; a 3-D screen test; an informative look at the history of 3-D; and "Dr. Tongue's House of Stewardesses," an amusing SCTV skit featuring John Candy, Eugene Levy and Catherine O'Hara.