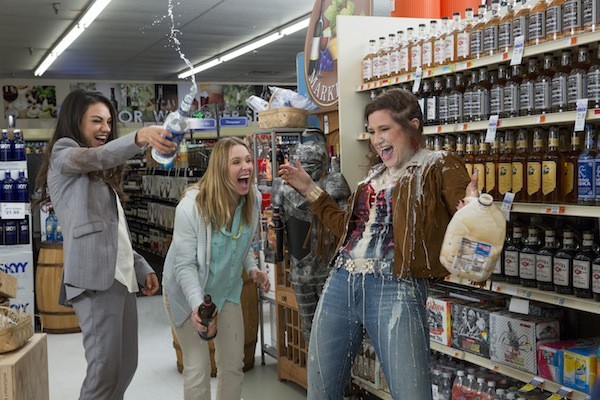 In such efforts as The Hangover and The Change-Up, screenwriters Jon Lucas and Scott Moore have allowed boys to be bad boys, engaging in all manner of lewd, obscene and even illegal behavior. With Bad Moms, the pair (who also co-direct) attempt to flip the script: Why not showcase women being as awful and irresponsible as the dudes? It's an interesting angle — although certainly not unprecedented (see Bridesmaids, with its terrific, Oscar-nominated script by Kristen Wiig and Annie Mumolo) — but a large degree of timidity and (maybe?) an unfamiliarity with the subject at hand combine to produce a soft film that, a few R-rated hijinks aside, might as well be playing as part of a primetime sitcom lineup, with a laugh track and some soft-drink commercials thrown in to complete the effect.

Mila Kunis portrays the main mom, feeling crushed by the expectations placed upon her by society at large and by a dictatorial PTA head (Christina Applegate) in specific. She finally feels she's had enough, severing ties with her cheating-via-Internet husband, forcing her bratty kids to do their own homework and make their own breakfasts, drinking to excess, and (gasp!) walking out on a PTA meeting. She's joined in her bad — make that mildly naughty — behavior by two other had-it-up-to-here moms (Kristen Bell and Kathryn Hahn), and together they decide to take on Applegate's harridan, who not only runs the PTA but seemingly the entire school.

Aside from a sincere performance from Kunis and a funny one by Hahn, there's not much to recommend Bad Moms, which brings up parental challenges in the modern age but doesn't do any digging beneath the surface. The villains are not only paper-thin and easy to knock down, they also allow Lucas and Moore to skirt any real issues. Wouldn't it have been more fascinating had Kunis' husband been a decent guy who nevertheless needed to do more for the household rather than just an absolute imbecile seemingly unable to tie his own shoes (begging the question, as it always done in lazy comedies, as to why a beautiful and intelligent woman would marry him in the first place)? And wouldn't it have been more satisfying to watch our heroines challenge ingrained patriarchal standards rather than just dealing with woman-on-woman crime instigated by Applegate's ludicrous character?

Certainly, many will appreciate Bad Moms in the same manner as they would any given episode of, say, Modern Family or New Girl. But our dear mothers deserve better.