Batman gets spanked at Purgatory 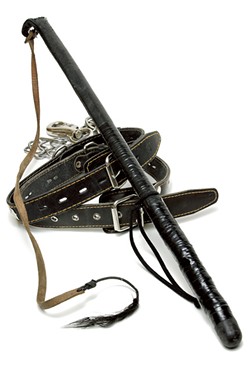 It was a long wait. My Batman mask was starting to sweat off the powder concealer on my face. The woman who finally took down my name looked bored even though she was dressed as a sexy version of my arch nemesis, the Joker. The earliest she could book my appointment to get spanked was 1:15 a.m.

My buddy Jordan peered through his green mask, nailing the super gay Robin look. "What are we going to do for the next hour and 45 minutes?" he asked.

This was how our superhero-themed evening began at the 13th anniversary of Purgatory, a long-running fetish party in Charlotte. Created by Single Cell Productions, the event at Amos' Southend features live performances and an upstairs VIP area where people can get spanked. It's been a local kink haven for years, so the crowd is mixture of newcomers, old timers and those who are jaded yet still show up.

Here's what happened while I waited to get spanked at Purgatory.

11:45 p.m. While on the dance floor, Spiderman in a natty suit freaked out to the beat. Then we locked eyes — well, as much of our eyes as you could see through our masks — and exchanged a thumbs up. A middle-aged lump in a pilled elephant onesie wiggled in place, too lazy to be a furry — a person who likes to dress up as anthropomorphic animal characters — yet too demented to be from the children's television series Babar. Drunk Christian Gray wannabes staggered around sans gray tie, looking more like their daytime banker selves than S&M-wielding billionaires. (The only Red Room of Pain these guys entered on a regular basis was their downstairs bathroom they mistakenly painted Brick instead of Deep Sunset.)

12 a.m. A red-headed burlesque dancer cosplaying as Poison Ivy popped off her top onstage. I don't remember the color of her pasties because I was having a stroke at the time.

12:30 a.m. Jordan and I went upstairs just in time to see Sexy Joker reapply her red lipstick almost to her eyebrows.

12:35 a.m. "Phoenix got hit in the head," said a man in a black leather vest to Sexy Joker. She stared at him with the bland concern of someone who had chipped a nail. The sound of performers grinding sparks off of their iron chest plates downstairs filled the space where her emotions should have been.

12:40 a.m. Phoenix appeared, and I knew that because he was the only person cradling the side of his head. No one offered him ice. All he did was hold a plastic cup filled with water of unknown temperature to his head.

1:15 a.m. My turn. Contrary to 50 Shades of Crap, there were solid boundaries in real S&M. The dominator's question of, "What would you like?" had the cadence of a first-time doctor's visit. I responded, "I like hard play on my butt, soft play on my top half. Oh, and I like hair pulling." Then he placed me on the vertical St. Andrews Cross and told me to keep my hands clenched, unclench one hand when he should back off and then unclench both hands when I needed to fully tap out.

He swatted at me like I was a piñata with an array of floggers and leather paddles, then pulled my hair like he was uprooting a bunch of carrots. It all felt invigorating, a moment to forget about those dishes in my kitchen sink.

When he struck me with a particularly big flogger, Jordan gasped. That's when the dominator whispered in my ear, "It really doesn't hurt that much, but people think it does because of the sound." We now shared a secret.

1:40 a.m. Left Amos' feeling like the Doris Day of the fetish party, so I stopped by Skyline Diner for a Belgian waffle with strawberry compote.

Next time, I'll book my next spanking appointment earlier in the evening.