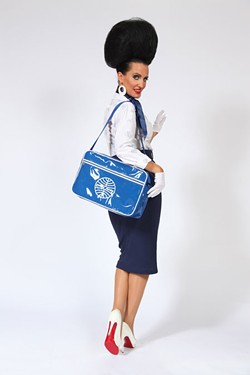 Airline hostess Pam Ann just made me promise to wear a gingham shirt when she flies into Charlotte for the first time. She insists all people in the South wear this pattern, even though she's never been here before. I'm not about to correct this raucous pretend flight attendant, whose real-life persona is Australian comedian Caroline Reid. Reid, who's bringing her one-woman show, Pam Ann Cockpit 2013 Tour, to Charlotte on Nov. 15, has sparred with live audiences as Pam Ann since 1996 and might take away my in-flight pretzels.

Creative Loafing: When did you create the character of Pam Ann?

Caroline Reid: I went [to a birthday party] as a Pan Am flight attendant from the '60s and throughout the night, after so many vodkas, I heard people calling me Pam Ann. It developed from something quite organic, really. I've just become a plane geek and love the airline industry. It's art imitating life because I travel all over the world now.

Did you interview real-life flight attendants?

I did once. [Jet Blue] flew in some ladies so I could talk to them about their days of flying. It was so fabulous. Back then, working for these airlines, they really looked after the cabin crew and they were seen as a very big asset to the airline industry. Just the dialogue and their passion for the airline were really heartfelt. A lot of German and Swedish girls worked for Pan Am. These women, you could tell, were very glamorous in their prime.

How often did you travel before performing as Pam Ann?

The first love of my life flew me to Greece. That was in coach and a long way, but it didn't matter because it was the first time I was flying overseas. I was 24. I flew a lot within Australia since I was 8 years old. I used to get shuttled off to Sydney from Melbourne as an unattended minor. I've always been flying, but not internationally. To fly internationally from Australia back in the day, you really had to save your money.

You say you got performance cues from drag queens.

I was working all the drag bars, doing an airline scene in a drag bar in Melbourne. Then Miss Candy, the drag queen, would come on after me and there'd be a bunch of us in this bar doing a joke. It was real bad. But I guess that's where it all started. It was really like [the 1994 film] The Adventures of Priscilla, Queen of the Desert. I worked with a lot of drag queens that the queens in Priscilla were based on, the actual real ones. Priscilla to me is almost my journey.

How has performing as Pam Ann affected your personal life?

As soon as you tell some straight guy that you dress up as an airline hostess and tour gay clubs and tour the world — and I swear a lot, I talk about sex — it turns a lot of guys off. I do struggle with relationships with straight guys. I wish I was a lesbian. I've tried it. I really, really want to be and I wish maybe in my later years [to be one]. I don't understand straight men. I wish I was a gay man. I'm going to end up like Liza Minnelli. Just marry a gay man and have a piano and call it a day.

Do you see yourself more as an entertainer or an advocate in the LGBT community, or a mixture of both?

I feel like I'm part of the fabric of the gay community. I can't stand straight clubs, straight people. I went to an all-girls school, so I'm kind of fucked up because I can't really talk to straight guys anyway. I have straight girlfriends in Australia, but 90 percent of my friends are gay. I was trying to count the straight people in my life. My brother's straight but should be gay. My parents are straight but my mum's been confused for a drag queen. Really not sure about dad. I think he's asexual. Then my ex-boyfriend I just split up with, he was straight but fucking weird. The gay community is something that is my life, really. I'm part of that, thank God.

What do you anticipate from the South?

Really friendly [people]? Hot? Dusty? Dust like tumbleweeds. And gingham. I haven't really researched it and that's how I see it.

I think you'll like Charlotte. There's not too much gingham-wearing, though.

What would Pam Ann say to Caroline Reid?

That I would be her bitch, I would just do everything for her. I'd be her PA. I'm bloody good at that. If I didn't do Pam Ann, I'd be a really kick-ass personal assistant, just because I'm super organized and I know everything about travel and booking and seats and shit. [As Caroline] I don't let people in easily, probably because I've been fucked over so many times. If I meet people on the street that know me as Pam, I'm a little bit more Pam, but me as Caroline, I'm kind of fun but can be a bit more serious. I'm probably a little bit more vulnerable, whereas Pam is so aggressive. I can be kind of introverted sometimes.

Thanks for talking with me.

I can't wait to meet you in your gingham shirt.

You know what, now I'm going to wear one.