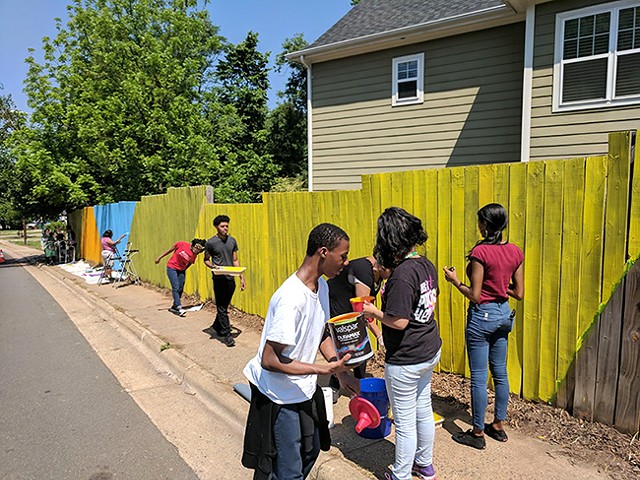 Early on a recent Saturday morning in NoDa, a group of about 20 students and volunteers from nearby Behailu Academy made their way to the edge of the neighborhood to begin a project that they hope will spark dialogue, even if they don't know how it will end.

The students started what will eventually be a large mural along Matheson Avenue, although the end design will continue to take shape in coming months, as it's based on an ongoing series of events being held at Behailu through November.

The mural will be the first of its kind in Charlotte, as organizers plan to make it interactive, complete with moving parts so residents can express their own ideas through it.

On Saturday, students and volunteers worked in the heat from 9 a.m. until noon to create much of the mural's background, a mix of orange, blue, green and yellow set apart in triangular designs.

They worked off of a photo of the planned finished product read, "I am, you are, they are, we are," with a map of Mecklenburg County and photos of a diverse group of Behailu volunteers and students. However, involved artists emphasize that the mural, which is funded by a beautification grant from the city's Keep Charlotte Beautiful program and the Foundation for the Carolinas, won't look quite like the original design when it's finished. 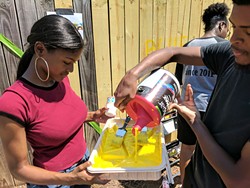 Bree Stallings, a local artist who also teaches at Behailu, came up with the idea for the mural after helping organize Behailu's recent "Meals, Minds and Movement" events. The monthly dinner meetings are designed to spark discussions around social issues. The events have already touched on power, privilege, race, gender, class and sexual orientation.

The last event, held on May 9, was titled "Let's Talk Sexuality: The Growing Alphabet of LGBTQIA+." Before that, on April 11, attendees discussed how gender roles shape their experiences and perspectives. May's discussion was the fifth of the year, with five more set for each coming month until November.

On June 6, organizers will take on "the New South," a term often used to describe Charlotte, discussing what it means to be a resident here and inviting city leaders to address those in attendance. Attendees will discuss immigration, refugees, citizenship, being a good neighbor and other similar issues.

The year of discussions will end on November 6 with an event that looks over everything that's been discussed.

Stallings said her plan is to change the design of the mural as she attends more Meals, Minds and Movement events and collects more data from attendees.

"Since Behailu is an arts-based academy, we want to allow the students to take their experiences and interpret them in a way that's larger than life that can be permanent in the community," Stallings said as she wrapped up the first day of work on the mural. 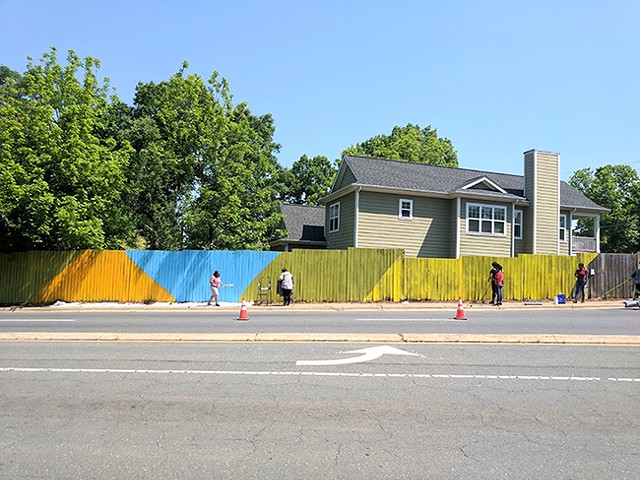 She plans to have the first part of the mural finished by July 1, then add the moving interactive parts by November. Though the plan isn't finalized, her wish is to add pieces attached to a sliding track, allowing residents to manipulate the images as they wish.

"I thought it would be a great way to have this second metaphorical layer about the conversations, because it continues," Stallings said. "Even though we'll be done with the 10 months of conversations, we're nowhere near being done talking about these topics in Charlotte, so hopefully it will be like a ripple effect and continue to allow these things to be brought up and discussed."

She said the interactive aspect of the mural will be a way to get more people involved. Thus far about 200 people have attended Meal, Minds and Movement events.

"It might be the easiest way to really commemorate the organic nature of the conversation, that it's not just one voice, it's many interpretations of different topics from different angles," she said. "And also that the audience participants and the people walking by in the community at large interact with this and make it what's interesting."