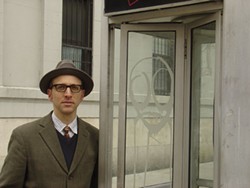 Imagine being on the verge of orgasmic ecstasy. Just as you're about to reach that glorious point, your partner screams out the unthinkable: "Do me, you hook-nosed Jew!" How would you react?

In playwright Peter Ackerman's Things You Shouldn't Say Past Midnight, Nancy gets off to the offensive anti-Semitic slur while her partner Ben is left with a dwindling erection and the only appropriate response he can muster: "What? What did you say?"

Things You Shouldn't Say Past Midnight premiered Off-Broadway in 1999, but remains relevant more than a decade later for good reason. It revolves around several couples, each with their own secret desires and prejudices, which are exposed behind closed doors — and in the sack.

The folks at Queen City Theatre Company are currently staging this comedy at Spirit Square's Duke Energy Theater through Aug. 2. CL caught up with Ackerman to talk about Things You Shouldn't Say Past Midnight and how the play continues to spark interest in both the theater and TV world.

Creative Loafing: What inspired you to write Things You Shouldn't Say Past Midnight?

Peter Ackerman: At the time that I wrote it, in the late '90s, I had just moved to New York City. I was interested in the fact that there are so many different people from all kinds of different places who suddenly are together; sometimes in very intimate moments. There are moments where you feel really connected with somebody and then something pops out and you realize what different places you come from and you have to think about how to integrate that into the new relationship.

In what ways did Things You Shouldn't Say Past Midnight change your life?

It ran Off-Broadway in 1999 for six months and it really transformed me from an actor to a professional writer. Suddenly it was on in New York City and I had more writing opportunities. It led to my first big job in the movies, which was working on Ice Age. It also transformed my life personally, because one of the actresses in the play became my wife — we've been married for 14 years and have two kids. So, it's a very important play for me.

Things You Shouldn't Say Past Midnight has been adapted as a TV series with 10 episodes slated to debut on DirecTV in October. In what ways will this series be similar and/or different than its original counterpart?

The play has six characters and three sets and we've expanded the TV series to 13 characters and about five interior settings and exterior space. The same six characters from the play are also in the TV show, but there are seven new characters. The play is incorporated in the TV show but the play takes an hour and a half and there's about five hours total for the TV series, so I wrote a lot of new scenes. In the play, it all takes place in one night in New York City, but we've adapted the TV series so that it all takes place in one night in Los Angeles. Again, people from all over Los Angeles and from very different walks of life are coming together in these crazy ways on a particular night. The idea is that things are released in people after midnight. Things you would not normally say in the day are said and some of those things seem very negative at the time but maybe turn out to be positive because they come out of your subconscious and release something.

What was it like to revisit a play that you wrote over a decade ago?

It was interesting to revisit these characters and to write new characters with the same tone because when I originally wrote the play, I was at a particular time in my life. I was an actor who was becoming a writer. Now, I have kids and a family and am at a very different place in my life. It was fun to sort of revisit that way that I was thinking back then and reapply it with certain writing skills I've developed now, as well as life experiences.