For Charlotte musician Luke Hill, it's a familiar scene 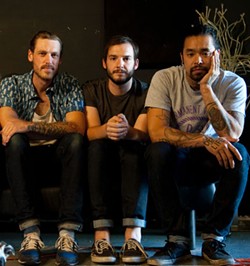 On June 28, local artist Joe Borruso was walking down Parkwood Avenue when he was struck by a drunk driver. He's had part of his left leg amputated, had surgery on his back to fuse a few of his lumbar vertebrae and more surgeries and extensive recovery time are in his future. Upon hearing the news, family and friends got together and started a YouCaring site to help raise funds (more than $15,500 at press time) and also planned a benefit concert to help Borruso's growing medical expenses.

Unfortunately, it's a story that's become all too familiar in Charlotte. When the benefit concert, being held at the Neighborhood Theatre on July 12 was being talked about, Charlotte rock band Animals was one of the first to volunteer for the gig. It's a cause that hits too close to home for the band's guitarist, Luke Hill, himself falling victim to a hit-and-run just eight months ago.

"When I heard what happened to Joe, I was just, 'No way.' I don't know Joe, but I couldn't believe something like this happened again. It brought me to tears," Hill, who also drums for Public Radio and at Elevation Church, says. "Fortunately, we're so blessed to have this community, to have friends and family who can step up and help. The community is going to support him until the very end of his recovery."

When Hill first heard of Borruso's accident and injuries, it was like a personal flashback. He not only knew right away that he wanted to help, but he also had an idea of what Borruso's future holds.

Hill himself was in rehabilitation for months recovering from his accident, which left him with a broken right arm, shattered right elbow, two fractured ribs, a brain bleed and torn-up knee last November. He's currently on a donor list to have the cartilage replaced in his knee, his arm is getting stronger each day and he is on his way to making a full recovery, he said, but it won't be without more hurdles. Even when the hospital time ends for Borruso, Hill said, there is often a long road ahead.

"I suffered a seizure three weeks ago — it might have been random or it might have been due to my brain injury. A neurologist is going to check me out," Hill says. "To put the cartilage on my knee, they first have to break my leg to straighten my leg out because I'm bow-legged so that recovery is going to take time. There are little things too — I don't remember my 30th birthday. I went to sleep at 9:30 p.m. on New Year's Eve. Memory loss and forgetting random things gets frustrating."

Hill says he doesn't remember much from the night of his accident; he remembers going bowling, but little else. (The driver/vehicle is still unknown in Hill's case.) "In some ways, it's better that I don't know who did it," Hill says.

Unlike in Hill's case, the suspected drunk driver in Borruso's accident remained on scene. The case is still under investigation with possible charges pending.

Hill's first real memories of anything tied to the event are from when he was on his way to rehab, weeks later. There's a good chance Borruso will have the same memory loss give the brain's penchant for blocking out traumatic events.

Hill only knows what he's been told about his own stay in the hospital. He doesn't remember trying to pull tubes out of his mouth. He doesn't remember the stream of visitors, either. But all the support he heard about later has meant the world to him, he says, which is why he's glad to see the same happening for Borruso.

"I just want to be able to help the community in any way I can to pay it forward," Hill, who has lived in Charlotte for 12 years, says. "My accident was on November 4, and it was maybe December before I knew what the community was doing and had done. I would have been completely floored if friends had just come to visit me — all that was done was overwhelming. I don't know if Joe is really aware of all that's going on yet.

"I would love to go see him and meet him when the time is right. I'd be happy to encourage him and if he ever needs help with anything or wanting me to hang out with him through therapy, I'll be there."

It's clear Hill's November incident has changed his perspective on life. He's determined to help more people in need. He says he might have laughed at someone stumbling down the street in the past, but these days he's more likely to ask if they need help getting home or make sure they don't get behind the wheel.

After Hill's accident in early November, a similar benefit concert was held. Adam Lazarra of Taking Back Sunday, a Charlotte resident, sang with Hill's band, Animals. It's fitting that Lazarra will perform again at the July 12 benefit during an acoustic Taking Back Sunday set, along with Animals — and this time Hill will be able to play, too — and a handful of other local bands. In addition to the concert, Hill's friends set up a GoFundMe page that raised more than $21,000 and sold popular "Luke Hill has a posse" t-shirts that can still be seen around the neighnborhood.

"I don't have a posse, but people are proud to wear that. I wish I could go on the news and thank the whole community for their support," Hill says. "I don't know what Joe's condition is or when he'll get out of the hospital, but when he does, he's going to see the community light up for him. He'll have strangers coming up to him and hugging him, telling him they've been praying for him. For me, it hasn't stopped. Every time I'm at the gym, they encourage me. What helps is — he's not asking for any of this. It's the community that's asking for him and it's happening."

While it's unknown what the future holds for Borruso medically, Hill can attest to the power of the community and what their support means.

"I was out the other day and two people came up to me and asked how I'm doing," Hill says. "Even random people giving support means a lot. There's something about Plaza Midwood and Noda — the artist communities come together for family; but I hope that would happen in South Park or anywhere else in Charlotte, too."

While Hill's not afraid of crossing the street or riding his bike around town — though he does wear a helmet now – he says he's not likely to walk home at night anymore. He'll take a cab if he has to.

He's also trying to find the humor in the situation — if there is any. Hill's heavily tattooed frame is covered with images and words, but he hasn't paid tribute to his accident and recovery yet.

"I wanted to get a drawing of a car, with me up in the air and 'YOLO' written underneath," he says with a laugh. "I did survive and live through it. I've never been stronger and more determined in my entire life until now. A lot of choices you make not only affect your own life but possibly the lives of others. I think about that a lot."