Blade Runner 2049, Professor Marston and the Wonder Women among new home entertainment titles | View from the Couch | Creative Loafing Charlotte
Switch to the mobile version of this page.

BLADE RUNNER 2049 (2017). Is Blade Runner 2049 a masterpiece like its 1982 predecessor? Definitely not. To be honest, it’s not even a match for 2016’s superb Arrival, the previous film from director Denis Villeneuve. Yet on its own terms, it’s a dazzling achievement, a heady motion picture that employs state-of-the-art visuals to punch across its alternately tough and tender story of love, loss and identity. It’s set 30 years after Ridley Scott’s original, when replicants are comparatively more benign than the previous models. Blade runners still exist, tasked with tracking down the vintage replicants and terminating them — one such blade runner is “K” (Ryan Gosling), who’s a replicant himself. Hampton Fancher, who co-wrote the original (adapting Philip K. Dick’s Do Androids Dream of Electric Sheep?), and Michael Green do a fine job not only of maintaining this futureworld but also in laying out themes that lend new meaning and import to what Salvador Dali tagged Persistence of Memory. Yet a few niggling queries still manage to formulate amidst the ample exposition, and, for a film that runs a generous 164 minutes, the back end still feels needlessly rushed. Yet overall, Blade Runner 2049 is a towering work, and if there’s one area in which it equals its predecessor, it’s in its empathic reach – this is particularly true with an AI named Joi, achingly brought to life by Ana de Armas. Mainly, though, there’s Harrison Ford, returning to the part of Rick Deckard. Ford’s role should have been much larger, but in the context of what he’s given, he’s excellent, providing a wariness — and weariness — that lines up nicely with the Deckard from three decades earlier. Ford’s turn is just one of the ample pleasures in a movie that won’t soon fade from memory.

Blu-ray extras include a pair of making-of featurettes examining the film’s visual design and the casting, and a trio of prologues. 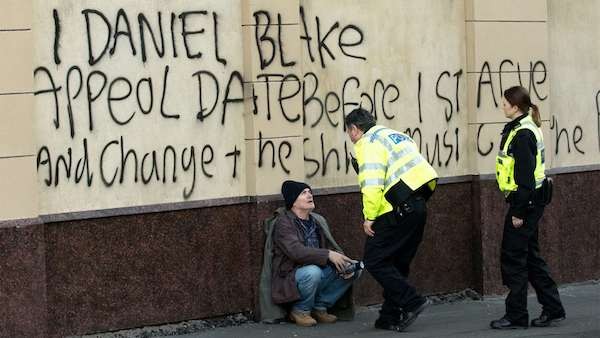 I, DANIEL BLAKE (2016). According to one of the extras on the Criterion edition of I, Daniel Blake, director Ken Loach retired in 2014 after a robust 50-year career. Then Britain’s Conservative Party enjoyed a sizable victory in 2015, leading Loach to return to filmmaking to helm I, Daniel Blake. It was the right move, with the picture taking the Palme d’Or at Cannes and becoming the biggest success of the maverick director’s career. Dave Johns delivers a formidable performance as a 59-year-old carpenter who suffers a heart attack and then receives an outrageous and frustrating runaround from the government agency that’s supposed to be helping him. As Daniel contends with an uncaring and incompetent bureaucracy, he takes time to befriend a single mom (Hayley Squires, also excellent) and her two kids. It’s impossible to watch this movie without being forced to cope with bouts of sadness and helplessness – it’s honest and uncompromising, although moments of humor do manage to break loose. Loach’s criticisms about the state of the U.K. are quite pronounced, but say this about the British: The movie was not only a commercial hit and a major contender with BAFTA (the British Oscars), it also inspired legions of people to get involved with viral campaigns and led to robust debates with politicians. Compare that to this country’s response to I, Daniel Blake’s American cousin, The Florida Project: meager box office, only one Oscar nomination, and crickets in place of any significant conversations. It seems that, in Trump’s America, even most liberals don’t really want to pay attention to those impoverished folks living on the fringes.

Blu-ray extras include audio commentary by Loach and scripter Paul Laverty; a making-of feature; deleted scenes; and the 2016 documentary Versus: The Life and Films of Ken Loach. 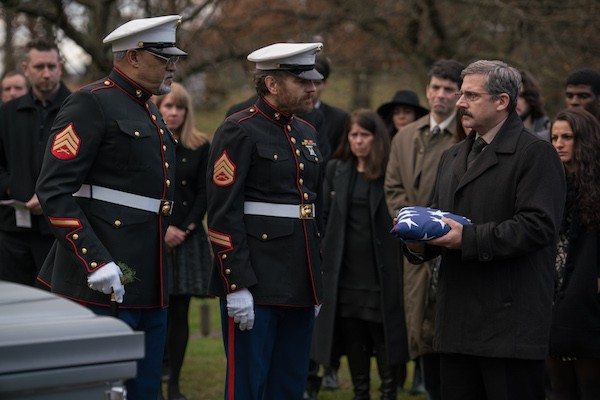 LAST FLAG FLYING (2017). An unexpected offering from writer-director Richard Linklater (Dazed and Confused, Boyhood), Last Flag Flying will certainly stir memories of the 1973 Jack Nicholson vehicle The Last Detail, and that’s no accident. Both films are based on novels by Darryl Ponicsan, and the author himself co-scripted this new picture alongside Linklater. Set in 2003, it focuses on Larry “Doc” Shepherd (Steve Carell), a Vietnam War veteran whose only child has just been killed in the Iraq War. Before traveling to claim the body, he asks two fellow grunts he hasn’t seen in approximately 30 years to accompany him on his road trip. Both Sal Nealon (Bryan Cranston), now a coarse bar owner, and Richard Mueller (Laurence Fishburne), long a respected reverend, say yes. What follows is a journey that hits most of the expected beats, with Richard loosening his holy collar, Sal exhibiting flashes of restraint and sensitivity, and Doc coming to grips with the death of his son. All three actors are predictably excellent, and there’s an appearance by the great Cicely Tyson (looking fabulous at 92) as the grandmother of a soldier whose death in Vietnam remains a troubling link between the trio. Indeed, the characters’ memories of Vietnam commingle easily with the film’s Junior-Bush-league setting. Doc, Sal and Richard all love their country but hate the ever-changing governments that perennially view young Americans as expendable fodder, and the three men can’t help but chuckle as they hear a young Marine repeat the gung-ho speeches they themselves heard 30 years earlier. Last Flag Flying is proudly pro-soldier and anti-war, and while those racist imbeciles whining about the NFL player protests lack the mental capability to understand the difference, real American patriots will grasp it at once.

Blu-ray extras include a making-of featurette and deleted scenes.

MY COUSIN RACHEL (1952). While several screen adaptations of Daphne du Maurier works remain highly revered by film fans and scholars — specifically, Alfred Hitchcock’s Rebecca and The Birds and Nicolas Roeg’s Don’t Look Now — My Cousin Rachel has largely fallen by the wayside. Today, it’s mainly remembered for nabbing Richard Burton a ridiculous Oscar nomination for Best Supporting Actor – ridiculous not because he’s bad in the film, but ridiculous because he’s the lead actor and appears in almost every scene in the picture. Marking his first appearance in an American production, Burton is a triumph as Philip Ashley, a moody Englishman who convinces himself that his beloved uncle and protector Ambrose (John Sutton), who supposedly died of a brain tumor, was actually murdered by Ambrose’s new wife. That would be Philip’s cousin Rachel (Olivia de Havilland), and the young heir plans to confront her when she arrives at his Cornwall estate for a visit. Instead, he immediately succumbs to her charms and proceeds to act in increasingly immature and irresponsible ways. The Gothic ambience and Burton’s brooding turn are the picture’s strongest elements – as for de Havilland, she’s acceptable as the title character, although Rachel Weisz eclipsed her when she essayed the role in last summer’s decent remake (alas, Sam Clafin was no match for Burton). In addition to Burton’s Oscar nomination (a mid-century example of the category fraud that still exists today), the film also earned nods for its cinematography, art direction, and costume design.

Blu-ray extras consist of a vintage radio adaptation; the theatrical trailer; and an isolated track of Franz Waxman’s score. 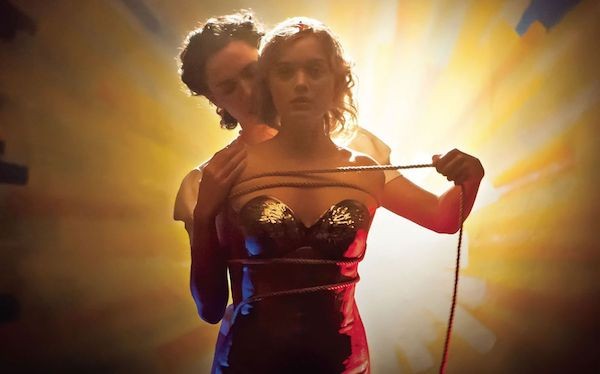 PROFESSOR MARSTON AND THE WONDER WOMEN (2017). While director Patty Jenkins’ Wonder Woman became one of the biggest stateside hits of 2017 – at the box office, its $412 million score placed it only behind Star Wars: The Last Jedi and Beauty and the Beast – writer-director Angela Robinson’s Professor Marston and the Wonder Women emerged as one of the year’s biggest flops, grossing only $1.5 million during its run. Worse, its financial failure extended beyond just the 2017 calendar year: Of all movies that opened on over 1,000 screens, it ranks as the 18th worst of all time (not quite at the abysmal level of the infamous The Oogieloves in the Big Balloon Adventure, but in the same ballpark). That’s a shame, because this not only works as a fine companion piece to Jenkins’ excellent superhero saga but also as an engrossing piece in its own right. Its focus is the threesome comprised by Dr. William Moulton Marston (Luke Evans), his wife Elizabeth (Rebecca Hall), and their college-age assistant Olive (Bella Heathcote). Marston was the psychologist who created Wonder Woman for the comic pages, and what’s fascinating about the film is the manner in which it illustrates how his relationship with these two women – and the women’s relationship with each other – informed his outlook on everything from sex to feminism and in turn allowed him to come up with his decidedly kinky superheroine. The breezy first half gives way to a more cumbersome second part, but the film never loses altitude in either its open-minded approach or in its pointed criticism of conservative prudery and anti-intellectualism (scenes of Wonder Woman comics being burned in bonfires bring to mind images of Dixie Chicks CDs being burned by right-wing yokels or books being burned by Nazis).

Blu-ray extras include deleted scenes; a piece on Robinson; and the animated short The Secret Identity of Charles Moulton. 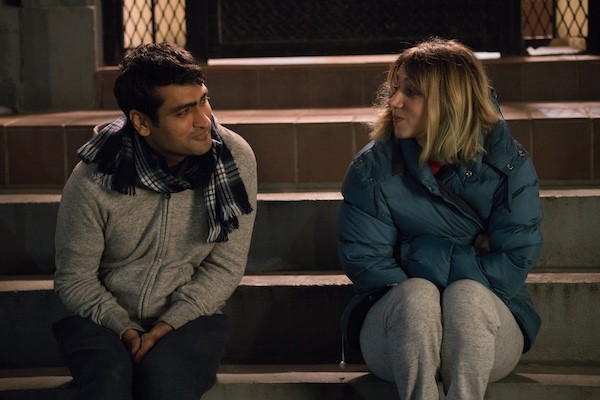 THE BIG SICK (2017). A current Academy Award nominee for Best Original Screenplay, The Big Sick finds its unlikely inspiration in the real-life relationship between Kumail Nanjiani and Emily Gordon. Nanjiani, perhaps best known for his role on TV’s Silicon Valley, basically plays himself while Zoe Kazan plays Emily Gordon (Emily Gardner in the film). He’s an aspiring stand-up comedian who’s perpetually having to contend with the attempts of his Pakistani parents (Anupam Kher and Zenobia Shroff) to rope him into an arranged marriage; she’s a college student who falls for him but then breaks it off when she realizes that he’s keeping her a secret from his family. So far, so expected — at least in terms of its comic beats and its romantic travails. But then Emily lands in the hospital, and the film veers off into unexpected directions as Kumail tries to deal with Emily’s misfortune while also attempting to ingratiate himself with her parents (Holly Hunter and Ray Romano). The script by Nanjiani and Gordon is generously laced with wit and wisdom, although the culture-clash interludes generally work better than the material centered around the comedy club. The acting is impeccable, with Hunter and Romano the cast standouts as Emily’s stressed parents. (Amazon Prime)