Turning up the music for a moving memoir 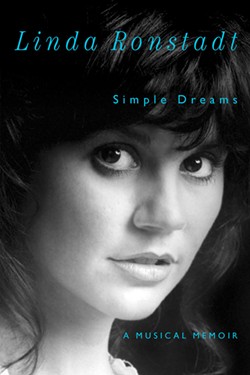 Linda Ronstadt, the Queen of '70s Rock, whether she likes the title or not (she doesn't), has written one of the best rock star memoirs yet, one that's as good for what it leaves out as for what it tells. Lovers of celebrity gossip and dirt-dishing, be forewarned: Ronstadt meant it when she subtitled Simple Dreams "A Musical Memoir." It's long on music, rock history and the singer's intense dedication to her craft — even at the potential cost of losing fans by experimenting with non-rock styles — and very short on affairs, drugs, abusive kin, rude fans, abortions, plastic surgery, her health or music moguls' couches.

Not that Ronstadt doesn't let you know what she thinks about the people and places she encountered in her long career — Jim Morrison comes across pretty clearly here as a woman-beating drunk, for instance — but her language is subtle, her tone intelligent and reserved. Plus, again, it's a musical memoir. To that end, she emphasizes growing up in a large, musical, bicultural family in Tucson, and then details the evolution of her 40-year career.

Longtime fans won't be surprised by the singer's reticence to talk about her personal life; that's never been her style. During the peak of her popularity, gossip about Ronstadt was hard to come by, aside from the breathless reports of being seen with then-boyfriend California Gov. Jerry Brown — a relationship that obviously meant a great deal to her but to which her book devotes no more than a couple of scattered paragraphs. She names a few men with whom she had romantic relationships in what she calls her "serial monogamy," people most fans are already familiar with, like musician/songwriter J.D. Souther, musician Lowell George and writer Pete Hamill, but she respects their privacy as much as she values her own and her accounts aren't "dishy" in the least.

At the National Book Festival in Washington, D.C. in September, Ronstadt downplayed the "sex-drugs-and-rock-n-roll" lifestyle. She told interviewer Mary Jordan of the Washington Post that stories of her era's rockers' wildness were exaggerated and that "her nightlife was often cuddling up with her stuffed panda reading Anna Karenina." Yes, she did drugs, but they weren't an obsession. "My addiction was to reading," she told Jordan. Reading, the intricacies of singing techniques, along with visits to clubs to see and meet other performers — those were her main interests in the early part of her career, and they make for some of Simple Dreams' most interesting passages.

As a rock history enthusiast, I was enthralled by the details of how the California country-rock scene developed: who met who when and where, what they learned from each other, whose manager called what person to play on a particular cut and how it all meshed together to found what was, at the time, a pioneering expansion of rock 'n' roll's reach.

That movement reached its peak and after a decade became a self-parody, but that happens to nearly all artistic movements. When it does, fans retain the best of the old and then move on. As an artist, though, you either grow or you become irrelevant. Ronstadt, always interested in improving herself, her vocal techniques, phrasing and control, decided it was time to do something besides playing huge arenas where the sound "was kind of like being in a flushing toilet with the lid down." She decided to find a way to perform in small, theater-like settings, hoping for the best from her fans.

For her, that led to performing on Broadway in Gilbert & Sullivan's The Pirates of Penzance, a musical move that delighted many fans and appalled others who wanted her to keep belting out "You're No Good" in concrete coliseums ad infinitum. The Pirates experience made it easy for her to slide over into singing Great American Songbook standards with orchestral arrangements by Nelson Riddle, who had arranged some of Frank Sinatra's best work. Later, after three albums of lush standards, she started tapping successfully into her family's rich musical history, which included a variety of musical styles from her Mexican heritage on her father's side.

Ronstadt was the most versatile singer of her generation, one of the most adored by fans, and one of the most generous stars, willing to help up-and-coming songwriters throughout her career. Looking back on that career makes one wonder (although she doesn't mention this in her memoir) just what it's going to take for the grown-up little boys currently running the Rock and Roll Hall of Fame to get their heads out of male guitar bands' sphincters and give Ronstadt her due.