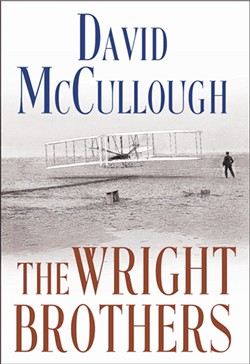 What's better than beach reading? Nothing. Setting up on the sand and sweating your way through a good book while listening to and gazing at the ocean is one of the best things in life, period. If you agree, enjoy these recommendations during your time at the shore — or, for that matter, anytime this summer.

In early 1903 on the Outer Banks of North Carolina, two brothers from Ohio successfully flew an airplane they had designed and built. Thus the age of flight started, and the fundamental human dream of flying suddenly became a reality. Worldwide fame would have to wait for bicycle shop owners Wilbur and Orville Wright, but eventually the pari were transformed from little-known Midwesterners to harbingers of a worldwide future they could hardly imagine. And that's why, over 100 years later, N.C. cars display a ghostly image of a primitive flying machine on their license plates. The fearless and extraordinarily persistent brothers who built that plane, and the years of study and trial and error that went into their invention, are the main focus of the new book by Pulitzer-winning historian David McCullough, The Wright Brothers.

It's a different kind of book for McCullough, who has often cranked out jam-packed, major doorstops on everything from Harry Truman to the Panama Canal to John Adams. In The Wright Brothers, the historian delivers a more concise account that doesn't get caught up in the thousands of minute details that arise when one collects information about most historical characters. One reason for McCullough's economy could be that the Wrights weren't exactly social butterflies, even after international fame caught up with them, and thus fewer details are waiting for an historian to cull. Not that the Wrights were boring by any means. Steadfast, focused, a bit geeky and physically brave, but not boring. After all, these guys wanted to fly. Now.

Wilbur, the genius of the two, corresponded with the Smithsonian and others to learn more about theories of bird flight. He shared that knowledge with Orville; once the two realized that physical flight was genuinely within their grasp, they became obsessed. Building, testing, studying, then re-building, re-testing and re-studying became the center of their lives — and then they'd do it all over again, again and again, often at great risk to their lives (Orville luckily survived a 75-foot plunge, although he broke one leg and a few ribs). McCullough does a masterful job describing the Wright family members in all their quirky, persistent rectitude — a short literary performance of clarity and insight that shines a bright light on the turbulent and slightly manic national atmosphere of very late 19th and early 20th century America.

The biggest surprise, at least to this reader, was how little notice the 1903 Kitty Hawk flight garnered. Sure, fellow inventors and other flight enthusiasts found out and increased the pace of their own experiments, but the general public remained either unimpressed or clueless. But in 1908, the Wrights conducted a public tour of Europe, during which their newly redesigned plane flew higher than ever, and for miles; crowds went crazy, and Wilbur became an international celebrity overnight. Throughout, McCullough brings arcane mechanical problems down to earth, he picks the right details to reveal the Wrights' inner struggles, and the whole book zips along at a fast, easy clip. If this isn't the perfect beach read for this summer in the Carolinas, I can't imagine what is.

One of the most critically acclaimed novels of the past year, Euphoria is the rare historical novel that feels refreshing and new. Based loosely on legendary anthropologist Margaret Mead's research in Papua New Guinea in the 1920s and '30s, the story by Lily King is a vigorous tale of a love triangle among three sensual, intellectual westerners, free to pursue their wants and consciences on the other side of the world.

At the story's beginning the protagonist, Nell, based on Mead, has achieved fame from her study of sexuality among Samoan adolescents, but now feels directionless — a condition her husband Fen does little to help. When they meet a colleague named Banston (based on Mead's second husband Gregory Bateson), he revives Nell's spirit and curiosity and the three scientists join forces to research a female-dominated tribe called the Tam. Although Banston is initially reticent to get in between two married colleagues, it doesn't take long for the trio to set emotional, intellectual and sexual fires ablaze, The depiction of the work of field anthropology is surprisingly exciting in King's hands — as is her gift for portraying the slippery interweavings of three fascinating minds, two of whom are falling in love. King's novel is at once exotic, subtle and intense, with a thrilling outcome.