Book review: The King of Sports: Football's Impact on America 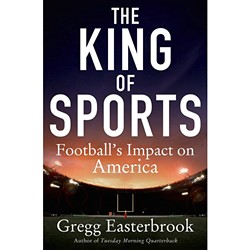 Football worship long ago spiraled out of control, fueled by taxpayer subsidies on stadiums and renovations, taxpayer-backed broadcast licenses used to make billions more for leagues and networks, and so forth. Gregg Easterbrook, a contributing editor at The Atlantic, delivers the assessment and judgment football and its millions of fans need to hear in his new book, The King of Sports: Football's Impact on America.

Easterbrook writes the Tuesday Morning Quarterback column for ESPN.com, but comes to this task with the benefit of a much larger intellectual perspective. His knowledge of economics and politics lend insight into what he calls the Grand Illusion of selling young men false hope to pursue football at the cost of everything else — and almost always coming up broke and battered.

Easterbrook analyzes the endless subsidies floating through the NFL, the nation's favorite $10 billion-dollar sport: "Usually the bonds issued by special stadium authorities are tax-exempt — meaning that to divert funds to a football facility, a city, county or state must either increase taxes on average people or cut spending that benefits society broadly, such as on schools and green space. ... The bulk of NFL stadiums, along with almost all related development such as parking lots, power, sewer connections and transit, are underwritten by taxpayers — then the revenue generated becomes private gain hoarded by the super-rich."

Easterbrook makes his case with an accumulation of logic, facts and anecdotes equal to Nick Saban on a recruiting trip.

And speaking of the Alabama football coach, Easterbrook takes care to delve into the hypocrisies of the college game as well as the professional. Such critiques are all the more devastating in the author's hands, because he makes clear his love of the sport, despite its many failings.

In some cases, lining up known facts side-by-side proves jarring. Our hometown quarterback, Cam Newton, won the Heisman Trophy and led Auburn University to the national title in 2010. The same season, the Green Bay Packers won the Super Bowl. Net income for the publicly held Packers during the championship season: $43 million. For Auburn football the same year, the haul approached that of the NFL's best team: $37 million.

Newton's coach, Gene Chizik, received a large pay raise and boosters and school administrators looked forward to years of Top 10 rankings and Bowl appearances. Within two years, Chizik looked like much less of a genius and molder of scholar-athletes without Newton, prompting Auburn to spend $16 million paying off Chizik and his assistants, to dump them in favor of a new regime better equipped to win games. Somehow, the athletic director responsible for these generous contracts kept his job, despite the hefty buyouts spurred by his giddy spending spree.

From stadium renovations to coaches' contracts (Saban earns more than $5 million per year and his university system chancellor told 60 Minutes it is the best financial decision he has ever made), Easterbrook shows how major college football programs exist more as businesses that license school names and logos than as university departments. Those businesses reward the Sabans and Steve Spurriers with lavish contracts and perks; rarely, if ever, do they question their behavior or decisions so long as the winning continues, and, of course, they use their nonprofit status to generate more money via tax-deductible donations from alumni.

On the latter point, the colleges are just taking cues from the pros. Literally. Easterbrook makes the point, often unknown to fans and ignored by media, that the NFL headquarters in New York is, thanks to a nifty bit of congressional football worship, classified as a nonprofit. (The 32 teams are for-profit and pay taxes.) This for a league whose commissioner, Roger Goodell, earns $30 million annually.

Goodell, to no one's surprise, declined to speak with Easterbrook when he learned the league's financial status and record on health issues (concussions, prescription painkillers) would be part of the interview.

Easterbrook finds some cause for optimism in football, too, spending a year inside the Virginia Tech program and reporting on encouraging graduation rates and pragmatism. Still, there is much here that will disturb fans in comparison to what the author calls the "smile-and-wave" coverage football receives on TV and in most other American media.

No matter how you feel about football's issues, The King of Sports offers plenty to think about. It's a blitz of sports and cultural perspective well worth any fan's time.