Capsule reviews of films playing the week of April 7 | Film Clips | Creative Loafing Charlotte
Switch to the mobile version of this page.

Capsule reviews of films playing the week of April 7 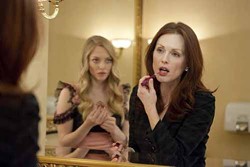 ALICE IN WONDERLAND Here's the problem with the vast majority of movies based on Lewis Carroll's Alice's Adventures in Wonderland and its sequel, Through the Looking-Glass: They're too tame, too hesitant and too conventional to really tap into the more unsettling aspects of an immortal fantasy that provides as much satisfaction for adults as for children. And now, falling down the rabbit hole of good intentions, is Tim Burton's new take on the classic, a visually stimulating rendition that nevertheless comes off as lamentably timid. Carroll's 7-year-old protagonist has been transformed into a 19-year-old heroine (played by Mia Wasikowska), who escapes from a dull Victorian-era garden party only to find herself tumbling into the strange world known as "Underland." She quickly comes to learn that this mysterious place is ruled by the wicked Red Queen (Helena Bonham Carter), who has usurped the throne from her saintly sister, the now-banished White Queen (Anne Hathaway). Convinced that it's all only a dream, Alice largely stumbles from one incident to the next; her strongest ally proves to be The Mad Hatter (Johnny Depp), who lost his marbles at the same time the White Queen lost her empire. Providing unnecessary backstory to an established character like the Hatter is the sort of boxed-in thinking that often torpedoes the picture. The changes made to the source material are, almost without exception, devoid of true vision or imagination, meaning that the most demented moments need to be embraced whenever they sporadically appear. The only cast member who truly excels is Bonham Carter, whose performance is outrageous enough to meet the demands of the Red Queen's excesses yet also allows a smidgen of pity to be applied toward the character's resigned awareness of her own deformity. The actress clearly holds the winning hand here, trumping all other players in this rickety house of cards. **1/2

AVATAR The only film capable of surpassing Transformers: Revenge of the Fallen as the Fanboy Fave of 2009, James Cameron's massively hyped Avatar at least differs from Michael Bay's boondoggle in that it's, you know, entertaining. On the other hand, the notion that it represents the next revolution in cinema is nothing more than studio-driven hyperbole, because while the 3-D visuals might rate four stars, Cameron's steady but unexceptional screenplay guarantees that this falls well below more compatible marriages of substance and style found in such celluloid groundbreakers as the original King Kong, 2001: A Space Odyssey, Toy Story and Cameron's own Terminator films. Here, the story meshes Dances With Wolves and Pocahontas with, amusingly enough, this year's animated flop Battle for Terra -- it's the year 2154, and the Americans have decided to destroy the indigenous people on a distant planet in order to plunder the land and make off with its riches (plus ca change, plus c'est la meme chose). Employing technology that allows humans to look like the blue-skinned locals, the Earthlings send in a Marine (Sam Worthington) to gain their trust, but as the jarhead gets to know these aliens better, he finds himself conflicted. For all its swagger, Avatar is rarely deeper than an average Garfield strip, but Cameron's creation of a new world demands to be seen at least once. ***

THE BOOK OF ELI Talk about apocalypse now. If there's one positive thing to be said about the sudden glut of end-of-the-world tales, it's that the batting average in terms of quality has been on the winning side. Certainly, 2012 was a stinker, but The Road, Zombieland, Terminator Salvation and now The Book of Eli have all been compelling watches, each for different reasons. In the case of The Book of Eli, the first film directed by The Hughes Brothers since 2001's criminally underrated Johnny-Depp-meets-Jack-the-Ripper movie From Hell, it's the potent religious slant that makes it intriguing. Thirty years after a war that wiped out most of the world's population, only one Bible remains in existence. The righteous Eli (Denzel Washington) owns it, planning to use it for good; the despicable Carnegie (Gary Oldman) wants it, planning to use it to forward his own insidious agenda (no mention in Gary Whitta's script as to whether Carnegie is related to Pat Robertson). Admittedly, the spiritual stuff often takes a back seat to sequences of Eli slicing and dicing his way through hordes of sinners. But Washington provides the proper amount of gravitas to his role, and the surprise ending almost matches the denouement of The Sixth Sense as an audience grabber. ***

THE BOUNTY HUNTER The Oscars for Best Sound Editing and Best Sound Mixing frequently go to war movies or science fiction films ­ this year, for example, The Hurt Locker beat out such competitors as Avatar, Inglourious Basterds and Star Trek for both statues. Frankly, I think the criteria regarding these categories should be modified so that the winner doesn't necessarily have to promote technical innovation or seat-rattling verisimilitude, but can instead simply make a torturous viewing experience more tolerable by including some aural pleasures certain to ease the suffering of moviegoers. By that token, I nominate The Bounty Hunter as an early contender for the next round of annual awards. If nothing else, the soundtrack contains a delightfully eclectic mix of songs, from The Rolling Stones' "Hang Fire" and Run-D.M.C.'s "It's Tricky" to Frank Sinatra's "This Town" and Jerry Reed's "She Got the Goldmine (I Got the Shaft)." Whenever these tunes (and others) floated through the auditorium speakers, it was possible to shut my eyes and pretend I was back home, peacefully sitting on the couch with beer or wine in hand. But then the music would subside and somebody on screen, usually Jennifer Aniston or Gerard Butler, would start speaking again, and I was cruelly snapped back to reality. Honestly, what's there to say about a romantic comedy so generic that it might as well have been called Generic Romantic Comedy? As the title character, a slob who's been hired to find his ex-wife and haul her to jail for missing a court date, Butler builds on The Ugly Truth by playing another boorish chauvinist, once again demonstrating that his comedic instincts are roughly on par with those of a great white shark. And as the angry ex, a reporter who's on the verge of single-handedly cracking a murder case (in tight dress and heels, of course), Aniston regrettably shows that she's only dependable when insulated by terrific indie casts (The Good Girl, Friends with Money) or co-starring opposite adorable retriever puppies (aww, Marley!). Predictably plotted, poorly cast (the leads have zero chemistry) and painfully unfunny (nothing here to even crack a smile, let alone bust a gut), The Bounty Hunter is yet one more imbecilic effort suffering from arrested development. *