BOOK CLUB (2018). As has become the norm these days (see: Last Vegas, Going in Style, etc.), various screen legends have been brought together not for an instant classic that deserves all the awards but for a frothy comedy that, frankly, is far beneath their collective talents. Yet bless Diane Keaton, Jane Fonda, Candice Bergen and Mary Steenburgen for signing those contracts. Without their presence, there would be little reason to see Book Club, but because they’re involved, the film marginally works as a showcase for their respective screen personas. Diane (Keaton) is recently widowed; Vivian (Fonda) embarks on an endless string of one-night stands; Sharon (Bergen) hasn’t had sex in 18 years; and Carol (Steenburgen) has seen her lengthy marriage cool down. These four women meet monthly for their book club, and since the latest novel to be digested is Fifty Shades of Grey, they all find themselves heavily thinking about sex and refusing to let their aged libidos go to waste. Much of the humor is smarmy and self-satisfied, and most of the rom-com relationships are strictly boilerplate (Andy Garcia and Don Johnson are among the various suitors). Nevertheless, the film makes some salient points about society’s irrational insistence on negating the continued aspirations of its senior members (particularly in regards to sex and love), and the actresses enjoy an ingratiating and easygoing camaraderie, particularly in the precious few scenes in which they actually discuss literature. Fifty Shades of Grey, Wild and Moby-Dick are the books showcased here; perhaps the sequel will allow us to hear their opinions on Miller’s Tropic of Cancer, Nabokov’s Lolita, and the entire Twilight oeuvre.

Blu-ray extras include a making-of featurette; deleted scenes; and a look at the film’s cast. 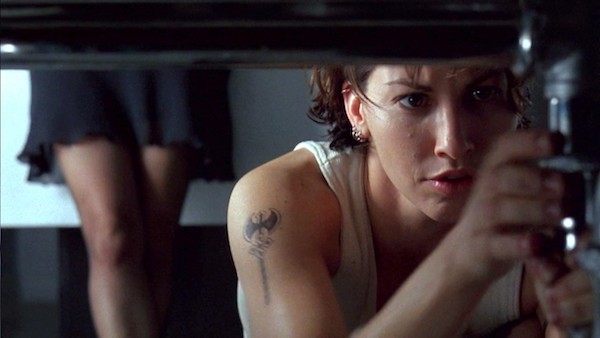 BOUND (1996). Before they became widely known for The Matrix, writer-directors Larry and Andy Wachowski (now Lana and Lilly Wachowski) made their mark with this bravura bit of pulp fiction, a steamy crime thriller (and significant LGBTQ film) that contains more suggestive double entendres in its dialogue than perhaps any movie this side of Double Indemnity. Corky (Gina Gershon), an ex-con settling into her new apartment complex, discovers that she’s living next door to Caesar (Joe Pantoliano), who launders money for the mob, and his pampered girlfriend Violet (Jennifer Tilly). After instantly falling for each other, the two women devise a scheme that will allow them to steal two million dollars of the mob’s money while leaving Caesar holding the (empty) bag. Initially, viewers might think they know how this will play out — after all, who hasn’t seen The Postman Always Rings Twice or Body Heat? But as the movie unfolds, it becomes apparent that the Wachowskis are doing everything in their power to remain a step or two ahead. All of the performances are superb, including Pantoliano as a guy who’s tenfold more intelligent than he initially appears and John P. Ryan as a brutal mob enforcer whose voice rarely rises above the level of a raspy whisper.

The new Blu-ray edition from Olive Films contains the theatrical version as well as an unrated cut that runs about a minute longer. Extras include audio commentary by the Wachowskis, Tilly, Gershon, Pantoliano, film editor Zach Staenberg (who would later win an Oscar for The Matrix), and technical consultant Susie Bright; an interview with Gershon and Tilly; and a discussion of noir and neo-noir by professors B. Ruby Rich and Jen Moorman.

COUNTRY (1984). Filmmakers often hit upon the same ideas at the same time, so just as, say, 1992 saw a pair of competing films about Christopher Columbus (1492: Conquest of Paradise and Christopher Columbus: The Discovery) and 1998 witnessed two animated efforts about insects (Antz and A Bug’s Life), 1984 saw no less than three – count ‘em, three – motion pictures that collectively became known as “save the farm” films. The masterpiece of the bunch — indeed, my personal pick as the best picture of 1984 – is Places in the Heart, starring Sally Field, while the shakiest of the trio is The River, starring Sissy Spacek. Resting in between the pair is Country, a somber drama that earned Jessica Lange a Best Actress Oscar nomination (she and Spacek both lost to Field). It’s no accident that director Richard Pearce shows the official photograph of then-President Ronald Reagan (dis)gracing a government building wall — there are no “trickle-down economics” working magic here, only an unfeeling bureaucracy that values profit over people. Lange and Sam Shepard (her off-screen partner for 27 years) are excellent as Jewell and Gil Ivy, a farm couple who have spent years dealing with unpredictable weather, dwindling profits, and other heartland hardships. Yet their greatest challenge arrives when they’re informed that they must repay their sizable FHA loan within 30 days or lose the farm to foreclosure. Pearce and scripter William D. Wittliff have made a tough drama that sidesteps sentimentality at every turn – in other words, don’t look for any cloying scenes in which an adorable moppet breaks open her piggy bank in hopes that it will save Mom and Dad. Only the abrupt ending disappoints.

Blu-ray extras consist of audio commentary by film historian Lee Gambin, and trailers for Country and three other titles offered by the Kino Lorber label (including A Thousand Acres, also starring Lange). 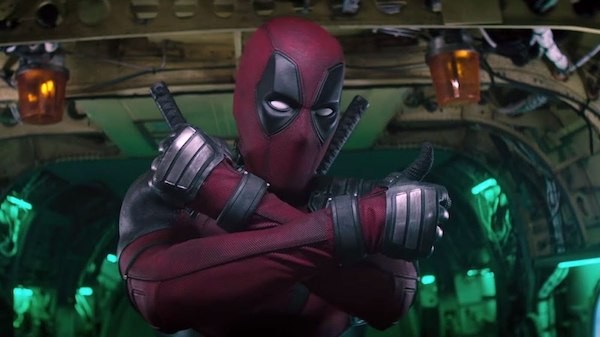 DEADPOOL 2 (2018). The best part of Deadpool 2 is what occurs during the closing credits (it’s ingenious and absolutely hilarious), while the worst part of Deadpool 2 is what occurs before the opening credits (it’s utterly predictable, not only when it comes to superhero tales but, really, most action films focusing on heroic loners). As for that vast middle ground between the opening and closing credits? It’s mostly a kick, adopting the same levels of arrogance, attitude and faux insouciance as exhibited in 2016’s Deadpool. If it doesn’t quite reach the plateau of its predecessor, that says less about the freshness of the film’s irreverent approach and more about the comparative stagnation in the character’s development. The main thrust finds Wade Wilson/Deadpool (Ryan Reynolds) trying to protect a young mutant (Julian Dennison) from the imposing Cable (Josh Brolin), who has journeyed back from the future Terminator-style to eliminate the boy and thus prevent impending heartbreak. There’s a lot of yammering in Deadpool 2 about the importance of family, but for the most part, it feels about as insincere as in those gross-out comedies that make fun of various players for 90 minutes and then suddenly ask viewers to open their hearts to them. But aside from Wade’s sweet interludes with Vanessa (Morena Baccarin), such sentimentality feels forced in a quip factory such as this one. The film works best when it takes nothing seriously, and Deadpool is never more endearing than when he’s directing his wisecracks at DC movies, the Avengers, the X-Men, and Thanos. Oh, and Logan. Always Logan.

The Blu-ray contains both the theatrical version as well as a longer, unrated cut. Extras include audio commentary by Reynolds, director David Leitch and co-writers Rhett Reese and Paul Wernick; behind-the-scenes pieces; deleted scenes; and a gag reel. 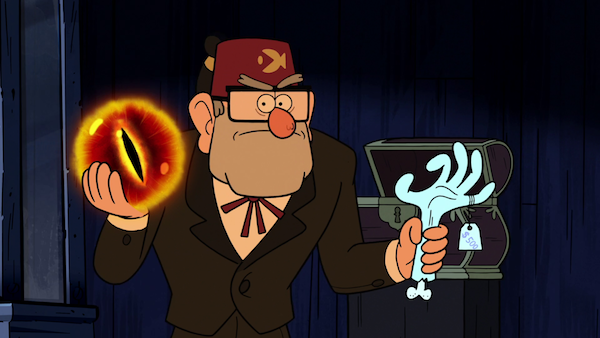 GRAVITY FALLS (2012-2016). This popular animated series (first shown on the Disney Channel before moving to Disney XD) was initially inspired by the summer vacations spent by creator Alex Hirsch and his twin sister Ariel during their childhood, but that’s the only relatively normal genesis for the show – in other respects, it plays like a mishmash of The X-Files and Scooby Doo, Where Are You!, with some Twin Peaks vibes and The Simpsons-style humor added for good measure. Hirsch himself provides the voice of Grunkle (i.e. great-uncle) Stan, who runs a tourist attraction, The Mystery Shack, in the town of Gravity Falls, Oregon. Joining him for one particularly eventful summer are his nephew and niece, 12-year-old twins Dipper and Mabel Pines (Jason Ritter and Kristen Schaal). Dipper becomes fascinated with a strange journal he finds in the forest, and soon he and his sister become ensnared in a series of supernaturally laced mysteries involving (among other creatures) zombies, gnomes, minotaurs and – deadliest of all – a demonic triangle known as Bill Cipher. Lasting two (extended) seasons and 40 episodes, Gravity Falls is the sort of toon that appeals equally to kids and adults – only seasoned grown-ups will likely catch the references to, say, “Manos” The Hands of Fate and Lars and the Real Girl, and one episode includes a highly imaginative tribute to legendary FX master Ray Harryhausen. Even if some of the fantasy elements feel overly familiar, the characters are anything but – indeed, the central trio of Grunkle Stan, Dipper and especially Mabel (love her vivaciousness!) prove to be the series’ greatest strength.

Blu-ray extras include audio commentaries on all 40 episodes; a lengthy behind-the-scenes piece; an interview with Alex and Ariel Hirsch; a handful of shorts; and several Easter Eggs. 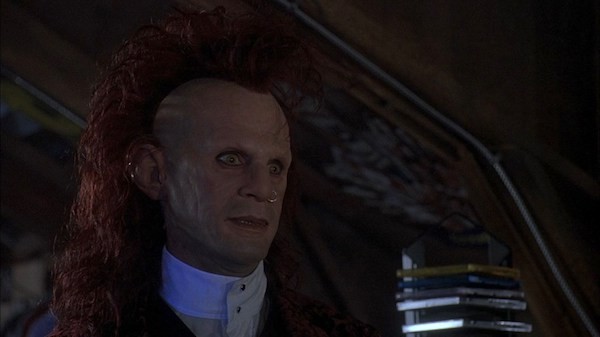 BRAINSCAN (1994). More entertaining as an artifact of mid-90s sci-fi than anything more substantial, Brainscan finds Terminator 2: Judgment Day’s Edward Furlong cast as Michael, a moody teenager obsessed with video games and horror movies. He decides to pop in a new interactive CD-ROM in which he adopts the POV of a serial killer — it’s all fun and video games until he figures out that he’s actually committing real murders, all at the prodding of a satanic figure known as The Trickster (T. Ryder Smith, playing yet another Freddy Krueger wanna-be). An interesting idea is handled in a pedestrian manner, and the denouement is a cop-out. George S. Clinton provides an effective score, even if it often sounds like warmed-over Carpenter (John, not Karen and Richard). 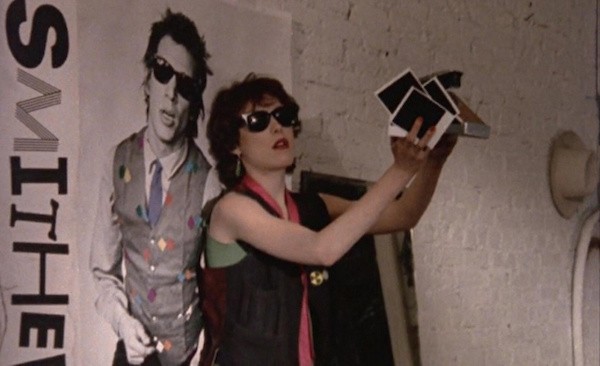 SMITHEREENS (1982). There’s much to dislike about Wren, the shallow, self-centered and often casually cruel character at the center of Smithereens. Yet it’s impossible not to get caught up in her escapades, thanks to the abilities of writer-director Susan Seidelman, scripters Ron Nyswaner and Peter Askin, and actress Susan Berman to transform her into a force of nature who never stops moving. Seidelman’s debut feature, a low-budget flick about a young woman fascinated by the punk scene, is a spirited mix of indie grit and DIY aesthetics, as well as a snapshot of NYC’s East Village in the early 1980s.

Blu-ray extras consist of audio commentary (from 2004) by Seidelman; new interviews with Seidelman and Berman; and two short films by Seidelman, 1976’s And You Act Like One Too and 1979’s Yours Truly, Andrea G.