Capsule reviews of films playing the week of May 26 | Film Clips | Creative Loafing Charlotte
Switch to the mobile version of this page.

Capsule reviews of films playing the week of May 26 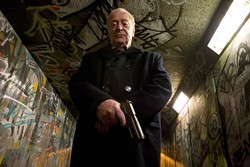 THE BACK-UP PLAN Jennifer Lopez's first screen outing in four years isn't a motion picture so much as it's a new form of Chinese water torture: Seemingly innocuous at first, it continues to pelt the viewer with one abysmal scene after another until insanity seems like the only logical result. Lopez stars as Zoe, a single woman who, tired of waiting for Mr. Right while her biological clock continues to tick away, elects to conceive through artificial insemination. But wouldn't you know it, as she walks out of the clinic, she bumps into a charismatic cheesemaker named Stan (Alex O'Loughlin), and they begin dating. Zoe waits until Stan falls in love with -- and makes love to -- her before she alerts him to the fact that she's pregnant and that he'll have to deal with this issue if he wants to permanently commit to her. Zoe's actions throughout the picture make her a particularly odious heroine, but that's the least of this film's problems: More detrimental are the slapstick gags scripted by Kate Angelo and directed by Alan Poul, including (but not limited to) the scene in which Zoe wrestles with her dog for possession of a pregnancy test stick and the sequence in which a woman gives birth in a bathtub while members of her single-mom support group chant around her (speaking of the support group, this movie exhibits nothing but contempt and derision toward single women). There's also the usual rom-com character of the outspoken best friend (Michaela Watkins) whose wisecracks are supposed to be funny but are instead merely obnoxious, the expected cutaway shots to the mutt whimpering or barking whenever one of the humans says something stupid (needless to say, this happens frequently), and an unhealthy obsession with scatological humor. The only bright spot is seeing '70s sitcom vets Linda Lavin (Alice) and Tom Bosley (Happy Days) in minor roles; the rest is unspeakably awful. *

THE BOOK OF ELI Talk about apocalypse now. If there's one positive thing to be said about the sudden glut of end-of-the-world tales, it's that the batting average in terms of quality has been on the winning side. Certainly, 2012 was a stinker, but The Road, Zombieland, Terminator Salvation and now The Book of Eli have all been compelling watches, each for different reasons. In the case of The Book of Eli, the first film directed by The Hughes Brothers since 2001's criminally underrated Johnny-Depp-meets-Jack-the-Ripper movie From Hell, it's the potent religious slant that makes it intriguing. Thirty years after a war that wiped out most of the world's population, only one Bible remains in existence. The righteous Eli (Denzel Washington) owns it, planning to use it for good; the despicable Carnegie (Gary Oldman) wants it, planning to use it to forward his own insidious agenda (no mention in Gary Whitta's script as to whether Carnegie is related to Pat Robertson). Admittedly, the spiritual stuff often takes a back seat to sequences of Eli slicing and dicing his way through hordes of sinners. But Washington provides the proper amount of gravitas to his role, and the surprise ending almost matches the denouement of The Sixth Sense as an audience grabber. ***

THE BOUNTY HUNTER The Oscars for Best Sound Editing and Best Sound Mixing frequently go to war movies or science fiction films ­ this year, for example, The Hurt Locker beat out such competitors as Avatar, Inglourious Basterds and Star Trek for both statues. Frankly, I think the criteria regarding these categories should be modified so that the winner doesn't necessarily have to promote technical innovation or seat-rattling verisimilitude, but can instead simply make a torturous viewing experience more tolerable by including some aural pleasures certain to ease the suffering of moviegoers. By that token, I nominate The Bounty Hunter as an early contender for the next round of annual awards. If nothing else, the soundtrack contains a delightfully eclectic mix of songs, from The Rolling Stones' "Hang Fire" and Run-D.M.C.'s "It's Tricky" to Frank Sinatra's "This Town" and Jerry Reed's "She Got the Goldmine (I Got the Shaft)." Whenever these tunes (and others) floated through the auditorium speakers, it was possible to shut my eyes and pretend I was back home, peacefully sitting on the couch with beer or wine in hand. But then the music would subside and somebody on screen, usually Jennifer Aniston or Gerard Butler, would start speaking again, and I was cruelly snapped back to reality. Honestly, what's there to say about a romantic comedy so generic that it might as well have been called Generic Romantic Comedy? As the title character, a slob who's been hired to find his ex-wife and haul her to jail for missing a court date, Butler builds on The Ugly Truth by playing another boorish chauvinist, once again demonstrating that his comedic instincts are roughly on par with those of a great white shark. And as the angry ex, a reporter who's on the verge of single-handedly cracking a murder case (in tight dress and heels, of course), Aniston regrettably shows that she's only dependable when insulated by terrific indie casts (The Good Girl, Friends with Money) or co-starring opposite adorable retriever puppies (aww, Marley!). Predictably plotted, poorly cast (the leads have zero chemistry) and painfully unfunny (nothing here to even crack a smile, let alone bust a gut), The Bounty Hunter is yet one more imbecilic effort suffering from arrested development. *