Captain America: The Winter Soldier heats up the season | Reviews | Creative Loafing Charlotte
Switch to the mobile version of this page.

Captain America: The Winter Soldier heats up the season 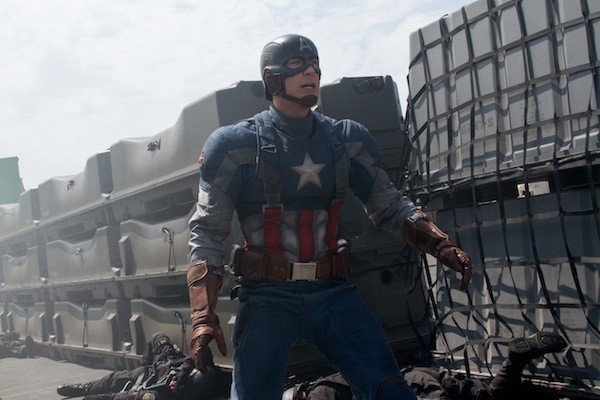 Among Marvel Cinematic Universe exercises, Captain America: The Winter Soldier fares better than fellow sequels Thor: The Dark World and Iron Man 2 and 3, even if it proves to be more of a team player than one of the leading lights of this whole superhero onslaught.

Superior to 2011's Captain America: The First Avenger, this film's strengths are different than those of its predecessor. Under the tutelage of director Joe Johnston, The First Avenger is the most low-key of all Avengers-related titles, with the story's World War II setting and Johnston's muted visual style aptly serving a work that's steeped in nostalgia and hawking an uncomplicated world view. Directed by siblings Anthony and Joe Russo, The Winter Soldier, set in the present day, is a far knottier piece, what with its shifting allegiances and questions of morality in a decidedly amoral world. It's also closer in execution to the typical blockbuster, with plenty of CGI bombast rocking the multiplex.

Thawed from his decades-long deep-freeze, Steve Rogers (Chris Evans), aka Captain America, finds himself finally getting used to living in this brave new world of the 21st century. But hailing from a time when everything was more black and white — the G.I.s were the good guys and the Nazis were the bad guys, period — he's not always comfortable with the stealth methods employed by his comrades Natasha Romanoff (Scarlett Johansson), aka Black Widow, and S.H.I.E.L.D. director Nick Fury (Samuel L. Jackson). Yet all concerns are tossed aside when a shadowy assassin known only as the Winter Soldier comes gunning for Fury. "Trust no one," Fury tells Rogers, advice that leads him to not even confide in Natasha, Fury's right-hand aide Maria Hill (Cobie Smulders) or Fury's longtime friend, S.H.I.E.L.D. bigwig Alexander Pierce (Robert Redford). But when Rogers' decision to withhold evidence leads to his being hunted by S.H.I.E.L.D., he finally elects to open up to a couple of people, one being his new friend Sam Wilson (Anthony Mackie). Wilson's involvement is especially fortuitous, since his aerial expertise — combined with one killer suit — allows him to fight alongside Cap as the Falcon. 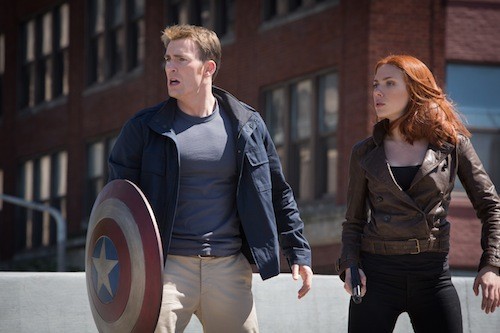 Captain America: The Winter Soldier imports so many cast members from The Avengers that it almost feels like the Age of Ultron is already upon us. Yet it's a credit to scripters Christopher Markus and Stephen McFeely that their stage feels crowded but not cluttered, as almost every character is allowed opportunities to shine. This is most obvious with Nick Fury, who's given enough time to work up a personality rather than just sporadically pop up to bark at superheroes (as he's done in every past MCU film in which he's appeared). And while I still silently weep over first choice Emily Blunt missing out on playing Natasha Romanoff/Black Widow because she was tied up with another film (the Jack Black bomb Gulliver's Travels, for God's sake), there's no denying that Johansson has completely made the role her own — she's so effective that she deserves her own movie, something that probably won't happen since she's the wrong sex. (A ludicrous claim? Try telling that to Wonder Woman, who's still waiting for a greenlight.)

Ironically, one of the least interesting characters is the good Captain himself. Much of the charm found in Captain America: The First Avenger came from Evans' sympathetic portrayal of a scrawny kid who was dying to serve his country and only got his chance after he was picked to be transformed into a super soldier. Evans invested a lot of heart and spirit into his role in that film, and while the actor makes no false moves in this new picture, he's hamstrung by the narrative demand that he now play the part in a more conventionally square-jawed, action-hero manner. Evans is still allowed some moments to play off Rogers' innate insecurities and air of innocence — there's a tender and affecting scene in which he visits a now elderly Peggy Carter (Hayley Atwell), his love interest back in WWII, and it's the star's finest sequence in the entire picture. But whereas The First Avenger was more about the character, The Winter Soldier is decidedly more about the costume that he dons.