Some people measure life by accomplishments. Others measure it by the amount of money they have in their bank accounts. Carlleena Person, a vibrant visual artist that Charlotte just had the misfortune of losing, was too damn busy living to worry about either. When charged to write about her, I was initially apprehensive. I did not know enough about Carlleena, I felt, to do her story justice. Then I attended her memorial service and found that everything I needed to know — the stuff that, in the end, truly matters — was right there in the room.

Carlleena died on May 20. According to the blogsite of childhood friend Diana Patten, Person died from complications of a car accident on May 1. She would have turned 33 on May 24, the day of her memorial.

Droves of people — the most diverse group I've seen in one place at one time — gathered to pay homage to the woman who had touched their lives as a daughter, a sister, a cousin, an aunt, a wife, a friend, and an artist. Individual after individual spoke of Carlleena's brilliant light, love and laughter. Her drive and unwavering work ethic (she apologized to me after missing a show due to the car wreck) allowed her to leave behind a legacy of work of which most artists who have lived well into old age would be envious. Carlleena's motto was "Life = Art." To her, the two were indistinguishable. "Life is Art and Art is Life and one cannot exist without the other," she wrote on the website for her company, Savnac Mural Designs. Prestige and notoriety meant very little to her compared to the process of creation itself.

Amid the sea of what Carlleena called "random thoughts" — stuff she jotted down on tables in her work space, "The Color Lab," or on her Facebook timeline — you could find treasures of inspiration and insight on her creative process:

* "I am not discouraged because every wrong attempt discarded is another step forward."

* "Whether I have an event or not, whether there is a show or not, I am an Artist."

* "Random Thought: When I get a little shaky with my artistic self-confidence which does occur from time to time because of my lack of "institutional" training...I look back on my first artworks and remember that I have come a long way. I am incredibly grateful that I have taken my art education seriously. Thank you to everyone who digs my work. Means more than you know. I am learning and growing."

* "Don't plan for (the) event, plan for the process ... Something might happen tomorrow and I must be ready for it."

And ready she was. Carlleena Ieasha Person hailed from New Jersey and was an artist in every way — a visual artist, a graphic designer, a muralist. She graduated North Carolina State University with a liberal arts degree but was largely a self-taught artist, reaching out to artists she admired for pointers. According to artist John Hairston, who spoke at Carlleena's memorial, she expanded on the information she received "in ways never imagined." Her work attracted young and old with its bold colors and abstract lines she used in order to shy away from ideas of perfection. In the interview with Creative Loafing posted below she talks about her celebration of the IMperfect. Her art was inspired by graffiti artists and outside-the-lines artists from other disciplines, from the anxious, free-form spiels of Beat writer Jack Kerouac to the boundariless jazz of John Coltrane. 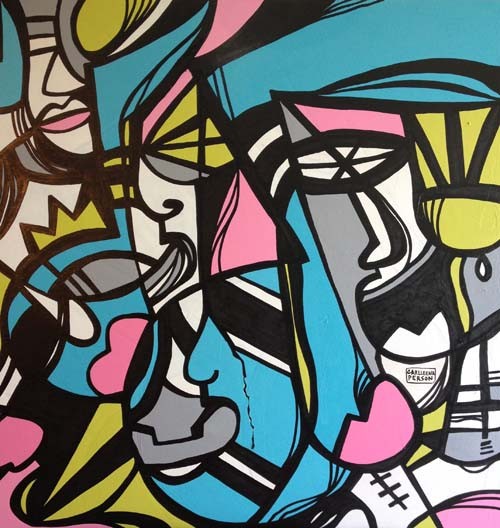 Carlleena's drive to create was matched only by her love of people, especially children whom she believed to be "the greatest natural artist(s)." She gave freely of her time, energy, and resources; she urged artists to invest in one another, investments she often made herself by promoting the works of other artists, by pushing for collaborations among artists of all kinds, by insisting that artists who wanted success to "go get something." In turn, Carlleena was loved by many, particularly her partner of nearly 16 years, Marcy Frantz, with whom she often exchanged sappy sweet nothings on her Facebook wall. Marriage equality, naturally, was highly important to her. Even in the midst of her post-car accident discomfort Carlleena remained vocal about her love of her "wife" and pushed for all to go out and vote down Amendment One, which sadly passed on May 8.

Carlleena's legacy in part is her artwork, which can be seen throughout the city in massive murals (on the side of the Charlotte Art League building) and in shops (FABO Cafe in Dilworth, Ruby's Gifts in NoDa, and Plaza Muse in Plaza Midwood.) Her living legacy continues in the lives she touched. I know that I will be forever impacted by the creative drive and spirit of this dynamic artist and human being.

Stacey Rose is an occasional CL contributor and Charlotte-based theater artist who has written and directed numerous plays including The Social Networth and Hip-Hop Unplugged, and directed award-winning playwrite Lynn Nottage's Fabulation, or the Re-Education of Undine. Rose was recently accepted into NYU's Tisch Scool of the Arts Asia for dramatic writing.

Watch Carlleena talk about her creative process in this CLTV video clip: