Caveman, The Purple Rose of Cairo, The Theory of Everything among new home entertainment titles | View from the Couch | Creative Loafing Charlotte
Switch to the mobile version of this page.

Caveman, The Purple Rose of Cairo, The Theory of Everything among new home entertainment titles

THE BRIDE WORE BLACK (1968). François Truffaut was — like most of us — such a gargantuan Alfred Hitchcock fan that it's no surprise he eventually made a film in the tradition of The Master. Arriving a year after the publication of the interview-as-book Hitchcock/Truffaut, The Bride Wore Black, based on a novel by Cornell Woolrich (writing under the nom de plume William Irish), employs a score by frequent Hitchcock collaborator Bernard Herrmann (Psycho, North by Northwest) to charge its tale of a formidable woman's quest for revenge. On her wedding day, Julie Kohler (Jeanne Moreau) watches as a bullet kills her husband on the church steps (given the structure of the film, particularly the ambiguity at the start, this is a mild spoiler, but since this plot point is stated right there on the back of the Blu-ray case, let's continue, shall we?). Julie thus devotes her life to terminating the men responsible, role-playing her way into each one's life and alternately acting as flirt, fantasy, mother and muse. Moreau is mesmerizing as the avenging angel, and the manner in which she interacts with each priggish man (including one played by French national treasure Michel Lonsdale) offers a fascinating study in a particular brand of male-female dynamics.

Blu-ray extras include audio commentary by film historians Julie Kirgo, Steven C. Smith and Nick Redman; the theatrical trailer; and an isolated track of Herrmann's score. Also included is a version of the film that was dubbed into English. A second disc, a bonus CD, contains a 79-minute interview with Herrmann that was conducted in 1970.

CAVEMAN (1981). Ringo Starr's screen career has always been something of a magical mystery tour, and following the offbeat likes of The Magic Christian, Son of Dracula and Lisztomania, the former Beatle continued his solo screen career by headlining this likable comedy set in One Zillion B.C. ("October 9th," to be exact). Starr stars as Atouk, a wimpy caveman smitten with the lovely Lana (Barbara Bach, Starr's real-life wife) but wary of her brutish boyfriend Tonda (John Matuszak). After getting ejected from the tribe, Atouk becomes the de facto leader of a group of similar outcasts whose members include the klutzy Lar (Dennis Quaid) and the compassionate Tala (Shelley Long); together, they do their best to survive attacks by both dinosaurs and Tonda's tribe. Stop-motion effects wizard Jim Danforth, perhaps best known for the creatures in the softcore romp Flesh Gordon (including the notorious Penisaurus), had a hand in creating the wonderfully goofy dinosaurs on view here, and the film's comic sparkle is further elevated by the fact that all of the characters speak in grunts and fabricated words (the exception is the English-speaking Nook, played by The Kentucky Fried Movie star Evan Kim). Look for Carl Lumbly, Agent Dixon on TV's Alias, as a member of Atouk's clan and Miguel Angel Fuentes, co-star of the MST3K favorite The Pumaman ("Shouldn't he be the hero?"), as one of Tonda's gang.

The only extra on the Blu-ray is the theatrical trailer. 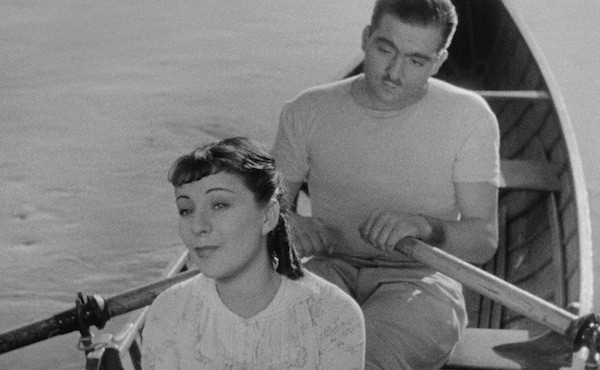 A DAY IN THE COUNTRY (1936). The story goes that the great Jean Renoir worked on A Day in the Country, left for another project, and then never returned to finish the film, thus necessitating others to assemble the available footage and belatedly get it into theaters ... in 1946. Some have claimed that Renoir actually did finish his vision for the movie before departing and it was the studio that wanted the writer-director to expand on the brisk 41-minute running time. Either way, the picture works just fine in its present form, with the seductive visuals and brief length allowing it to function as a cinematic poem rather than a feature-length tale (given that it's based on a short story by Guy de Maupassant, that's actually appropriate). The piece is an ode to both nature and the human heart, as a small group of city dwellers — mom, dad, grandma, daughter and daughter's fiancé — take a brief respite in the French countryside, whereupon the hard-of-hearing grandmother (Gabrielle Fontan) passes the time cuddling a kitten, the garrulous father (Andre Gabriello) and the milquetoast fiancé (Paul Temps) attempt to catch some fish and, most crucially, the jolly mother (Jane Marken) and the sensitive daughter (Sylvia Bataille) are wooed by a pair of local lads, the slick Rodolphe (Jacques Brunius) and the contemplative Henri (Georges D'Arnoux). With its resplendent shots of the outdoors and with water symbolically serving various functions (as seducer, as catalyst, as healer), A Day in the Country is a delectable bonbon of a film.

Blu-ray extras include an introduction by Renoir from 1962; a lengthy compilation of outtakes; a new interview and a new video essay, both with Renoir scholar Christopher Faulkner; a 1979 interview with the movie's producer, Pierre Braunberger; and screen tests.

DUMB AND DUMBER TO (2014). The 1994 smash Dumb & Dumber was the first effort from siblings Bobby and Peter Farrelly, who would then make a pair of comedies so hilarious and genuinely clever (Kingpin and There's Something About Mary), they quickly made D&D look even more imbecilic by comparison. Nevertheless, that hit has its fans, and they've been eagerly waiting 20 years for this sequel. But they're mistaken if they think this movie was produced for them. When it takes two decades for a sequel to appear, it only means those involved have been experiencing career free-falls and are hoping for an easy payday to revive their flagging fortunes. This one begins with a bit involving a stubborn catheter, and it's one of the film's few gross-out gags that works, thinks to an amusing buildup and some deft physical shtick on Jim Carrey's part. There's also a hilarious joke involving an addressed envelope, annnnd ... well, those two instances pretty much tap out the comic inspiration on view. The rest is a feeble reworking of the first film's story, with champion morons Harry (Jeff Daniels) and Lloyd (Carrey) again hitting the road to deliver a package and again running afoul of some nasty people who want them dead. Along the way, there are gags involving Lloyd's fingers up a septuagenarian's dusty, cobwebbed hoohah, a dog licking peanut butter off teenage Harry's penis, Lloyd stuffing his adult diaper with other people's poop — in short, the sorts of skits once routinely seen on Ed Sullivan's weekly TV show.

Blu-ray extras include a making-of featurette; deleted and extended scenes; an alternate opening; and a gag reel. 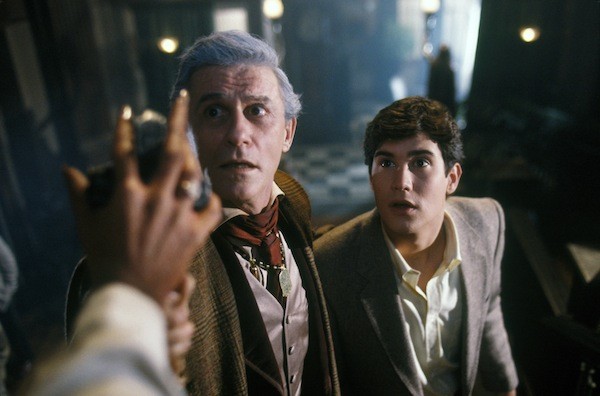 FRIGHT NIGHT (1985). There's good news and bad news involving the Blu-ray release of this popular '80s horror-comedy. The good news is that because the film was such a success for the tony Twilight Time label back in 2011, selling out all 3,000 copies almost immediately, it has been brought back by the label for another 5,000 pressings, this time billed as the "30th Anniversary Edition." The bad news? Yeah, this batch sold out even more rapidly than the first. Still, fans of the film won't have any qualms about paying a couple extra bucks for a used copy online or at a secondhand CD/DVD store, as the picture remains irresistible in its mix of humor and horror. Chris Sarandon is effective as the bloodsucker who moves in next door to a teenager (William Ragsdale) who knows there's something amiss regarding his new neighbor, while Stephen Geoffreys manages to be both annoying and touching in equal measure as a high school outcast. Yet the picture firmly belongs to Roddy McDowall, an absolute delight as a TV horror-show host who's unwillingly dragged into the whole frightful affair. Incidentally, this year's fourth annual Mad Monster Party here in Charlotte (March 27-29) will feature six Fright Night cast members among its guests: Sarandon, Ragsdale, Geoffreys, Amanda Bearse, Art Evans and Jonathan Stark. 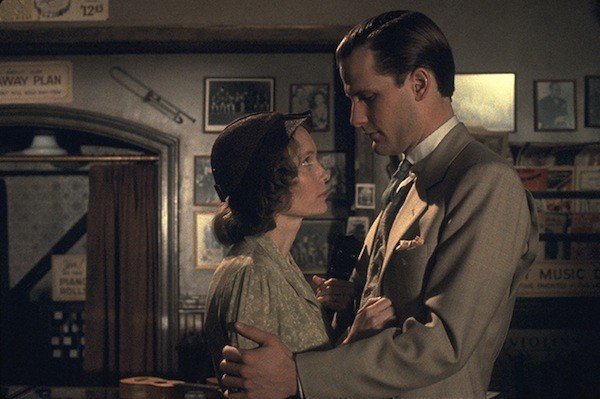 THE PURPLE ROSE OF CAIRO (1985). When discussing Woody Allen masterpieces, titles like Annie Hall and Hannah and Her Sisters are frequently cited (and rightly so), but where's the love for The Purple Rose of Cairo, a movie that even Woody himself considers among his top two or three? It remains one of the greatest pictures of his career, a movie that's incurably romantic yet also bracingly bittersweet. In the second of her three consecutive best performances in an Allen flick (sandwiched between Broadway Danny Rose and Hannah and Her Sisters), Mia Farrow plays Cecilia, a Depression-era waitress with a loutish husband (Danny Aiello) and an unquenchable thirst for films. It's during one of her repeat visits to the theater to catch the latest release (The Purple Rose of Cairo) that one of the film's characters, plucky adventurer Tom Baxter (Jeff Daniels), notices her in the audience and jumps off the screen to make her acquaintance. His action creates an uproar among the picture's other characters and among audience members, but an even greater panic is being felt in Hollywood, where Gil Shepherd (also Daniels), the actor who portrayed Tom Baxter, is ordered by the studio suits to hightail it to New York and take control of the situation by taking control of his creation. But Tom is hopelessly in love with Cecilia, and he's balking at the idea of ever returning to the silver screen. Even with its heartbreaking elements, The Purple Rose of Cairo emerges as an ode to the special relationship between movie and moviegoer, also finding time along the way to take hilarious potshots at oversized Tinseltown egos. Extra credit, also, for the deft use of music ("Cheek to Cheek") and footage from that most enchanting of all movie musicals, the Astaire-Rogers gem Top Hat. Despite being one of the best movies of 1985 — for my money, it was second only to Akira Kurosawa's Ran — The Purple Rose of Cairo received a single Oscar nomination, for Best Original Screenplay.

Blu-ray extras consist of the theatrical trailer and an isolated music track. 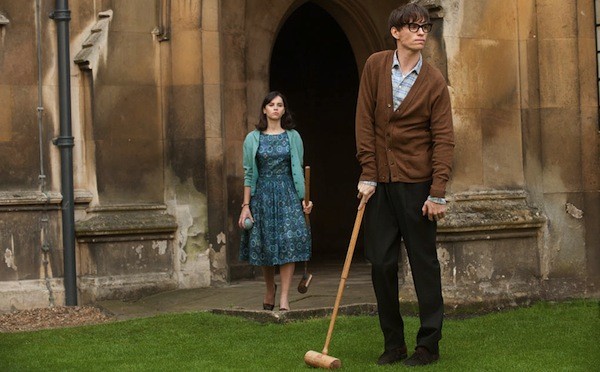 THE THEORY OF EVERYTHING (2014). The Theory of Everything presents a look at the life of celebrity physicist Stephen Hawking, best known for his chart-topping book A Brief History of Time. The film of course explores Hawking's professional achievements and physical debilitation but spends even more time examining his marriage to Jane (the movie is based on her book Travelling to Infinity — My Life with Stephen). It's an affecting love story, so potent that a third-act wrinkle arrives out of the blue and is played out in the blink of an eye, as if director James Marsh and scripter Anthony McCarten were afraid to allow reality to step on the fairy tale romance they had so carefully nurtured. Despite the clumsiness, it's hard to blame them: Eddie Redmayne and Felicity Jones are excellent as Stephen and Jane, providing the humor, strength and emotion required in any marriage, whether it's a real one or a reel one. This earned five Academy Award nominations, including bids for Best Picture, Actor, Actress, Adapted Screenplay, and Original Score (Jóhann Jóhannsson).

Blu-ray extras include audio commentary by Marsh; a behind-the-scenes featurette; and deleted scenes.

Tags: View from the Couch, film, review, View From The Couch, Blu-ray, DVD, Matt Brunson, The Bride Wore Black, Caveman, A Day in the Country, Dumb and Dumber To, Fright Night, The Purple Rose of Cairo, The Theory of Everything