Chickspeare lets the spirits flow with Every Christmas Story 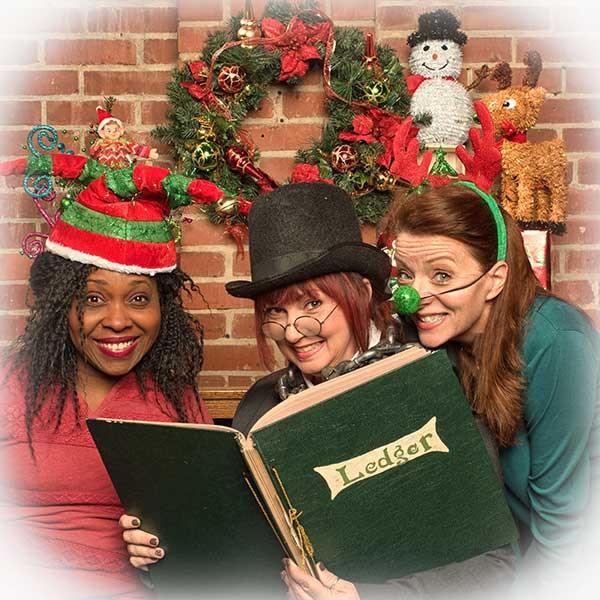 (From left) Tanya McClellan as Charlie In The Box, Sheila Snow Proctor as Scrooge and Lane Morris as Gustav the Green-nosed Reingoat.

Four centuries after William Shakespeare's death, Charlotte's own Chickspeare inhabits a parallel universe. Or maybe it's retribution: while all of the Bard's works were performed by all-male theatre troupes, all of Chickspeare's productions since 1998 have been "All women! All the time!" as originally promised. The "All Shakespeare" in the middle of that slogan was gradually blurred and dropped as the Chix added Reduced Shakespeare Company lampoons to their rep and then ventured farther afield.

Written by Michael Carleton, James FitzGerald, and John K. Alvarez, Every Christmas Story Ever Told (And Then Some!) is very much in the spirit of Reduced Shakespeare's original assault on the Elizabethan titan's complete works. The parentheses in the title, the quickie romp through multiple classics by three actors playing multiple roles, and the devotion of all of Act 2 to a single extravagant lampoon all follow the Reduced template.

But gender only begins to describe the difference between Chickspeare's version and the 2010 Actor's Theatre Every Christmas. The new model is as much an event as it is a theater production, an experience that begins and ends at the new NoDa Brewery location on N. Tryon Street. In between, there are a couple of shuttle bus rides back and forth from the original Brewery location on N. Davidson Street. You'll find more brew choices on tap at North Tryon, but the enticement of lifting a mug and participating in the many "To beer!" toasts during the Chix performance at North Davidson is hard to resist.

Few did last Friday night. Besides the brewskis, we had Anne Lambert lubricating the experience with a steady feed of Christmas trivia challenges on the bus ride to the show and the conviviality of the Chix banditas — Sheila Snow Proctor, Lane Morris, and Tanya McClellan — during their performance. But mainly, it was the beer that induced the party atmosphere.

Directing the show, Joanna Gerdy and Andrea King had a healthy disregard for the script. The playwrights labored under a handicap that never afflicted the Reduced Shakespeare collaborators when they chose ancient targets like Hamlet, the Bible and American history for their merry desecrations. Unlike your seasonal carols, most of our familiar Christmas stories aren't free-range prey. Copyright law prevents satiric assaults upon Rudolph the Red-Nosed Reindeer, A Charlie Brown Christmas and the Yuletide yarns of Truman Capote, Dylan Thomas and Jean Sheperd.

When Carleton, FitzGerald and Alvarez lashed out at these restrictions, the result was "Gustav, the Green-Nosed Rain-Goat," not the funniest sketch you'll ever see. Morris never plays the mutated venison as if it were comedy gold, so there's never any deadly straining to make it funnier than it is. We'll raise a glass, and then we'll move on.

The premise of the show is that Proctor wishes to proceed traditionally with a presentation of Dickens' A Christmas Carol, but Morris and McClellan are sick and tired of the same old stuff. Before they'll allow Snow to read her Dickens and play her Scrooge, she must join them in a medley of other Christmas faves, including Frosty the Snowman, Macy's Thanksgiving Parade, the Grinch, O'Henry's "The Gift of the Magi," and – maybe if there's enough time – the inevitable It's a Wonderful Life.

There isn't enough time, but that doesn't deter Morris. While Proctor is on-task as Scrooge, with McClellan visiting her as all three ghosts, Morris keeps insisting that Proctor is George Bailey, inflicting on us a bevy of characters from New Bedford Falls, including George's guardian angel, his brother, his banker nemesis, and his adoring wife. By the time Lane reaches the wife, it comes off oddly like a female impersonation.

Fortunately, Proctor is the ideal Scrooge in the face of these torments. There's a bit of Oliver Hardy and Bud Abbott in her forbearance, but we somehow remain on her side throughout her ordeal. At the climax of Christmas Carol, Morris is still bedeviling her, so she finally submits to becoming George Bailey – in a schizophrenic frenzy that finds her shuttling between Scrooge and Bailey as both McClellan and Morris assail her.

In her surrender, Proctor produces a Jimmy Stewart impersonation that's barely good enough to let you know what she's doing. It will probably improve during the next couple of weekends as the run continues, but I'm not sure it should. Likewise, Proctor can be a mite slow changing costumes, but McClellan's patience with her cast mate is so priceless, it would hardly pay for Proctor to hurry.

It's been a rocky road for Actor's Theatre of Charlotte since developers forced them out of their longtime home on Stonewall Street last summer. We thought they would resurface on Louise Avenue, but negotiations there collapsed, and the company tacked toward Freedom Drive. City and county paperwork delayed the opening, so their Toxic Avenger was redirected to a nearby church, and the current Great American Trailer Park Christmas Musical has been rerouted to the Patricia McBride and Jean-Pierre Bonnefoux Center for Dance, Charlotte Ballet's HQ on N. Tryon Street.

I was curious to see how director Chip Decker and his design team would adapt to studios with so much space and such a high ceiling. With two fair-sized ramshackle trailers, topped by two jumbo projection screens, height isn't a problem, and the design team fills out the stage with a fence, some Florida flamingo kitsch, an incongruous array of Star Wars memorabilia and, dead center of the stage between the two trailers, a half-decorated Christmas tree.

That odd tree, straddling the borderline between Rufus and Darleen's properties, triggers Betsy Kelso's plotline. Rufus loves Christmas and adores Darleen, but mean Darleen snarls "Bah" and "Humbug" to both. She will not decorate her trailer or even allow Rufus onto her property to decorate her side of the tree. That's a source of huge consternation to Betty, the manager of Armadillo Acres, who has always wanted – but failed – to win the big prize awarded to the best-decorated trailer park. A vague curse plagues Armadillo Acres, and it too will to be exorcised before we reach a happy ending.

There's a certain amount of respectability in Betty, so we're fortunate that it is more than counterbalanced by the trashiness of her other tenants, Pickles and Lin (short for Linoleum). They also come in handy when ghosts are needed to populate Darleen's Dickensian dream sequence. Rufus's romantic fantasies and Betty's hopes of nabbing top kitsch honors are revived when Darleen, in an effort to pull the plug on the park's Christmas lights, gets electrocuted by Rufus's declasse cable-splitter and wakens with amnesia. That enables her to forget what a Scrooge she is and the fact that she belongs to Jackie, owner of a slutty pancake joint.

If you missed the first and second comings of this trashy romp, it's good for you to know all the basics I've detailed. Although Actor's Theatre has done well with the Charlotte Ballet space, they have thoroughly failed to conquer its acoustics. So the songs and lyrics by David Nehls are more crucial to your enjoyment than usual — but often unintelligible over the four-piece band led by music director Brad Fugate.

Tommy Foster isn't as rednecky as Ryan Stamey was as Rufus, but he's a tad more pathetic and lovable. Karen Christensen is more than sufficiently bitchy as Darleen, and we often forget that Matt Kenyon is in drag as Lin. (So does he, I suspect.) But Jon Parker Douglas nearly steals the show as Jackie when he is possessed during the climactic exorcism. It's an epileptic farting fantasia that isn't quickly forgotten – and the kind of broad physical comedy this acoustically-challenged show desperately needs.