OnQ Productions doesn't usually perform at McGlohon Theater in Spirit Square, but when it does, it's kind of a big deal.

So shall it be, brothers and sisters, when God's Trombones -- sounds big, doesn't it? -- comes wailing, praising, shouting and testifying into the city for a three-night run beginning Tuesday, June 19.

Capping OnQ's "Season IX: Redemption Song," the current cast is among the theater company's biggest ever, with about 25 actors, singers, dancers and musicians performing onstage.

If you've ever attended an event at McGlohon and know its recent history as the home of Pastor Stephen Furtick's Elevation Church, or are aware of Spirit Square's origins as the Charlotte's First Baptist Church, you'll realize that OnQ has chosen the right place for James Weldon Johnson's "Seven Negro Sermons in Verse." To this day, the McGlohon retains its stained-glass, Sunday-church vibe.

As for Johnson, he was a seminal figure in African-American literature as a poet, novelist, essayist, critic, anthologist, songwriter and collector of spirituals. Oh yeah, and he also served as United States consul in Venezuela and Nicaragua under President Teddy Roosevelt and as executive secretary of the NAACP. But Johnson is best remembered for writing the lyrics to what's come to be known as the Black National Anthem, "Lift Ev'ry Voice," as well as for his novel The Autobiography of an Ex-Colored Man, and for his most anthologized poem, "The Creation," from God's Trombones, which was first published in 1927.

OnQ artistic director Quentin Talley has loved the piece since he was 12. That's when his youth choir participated in a production of God's Trombones presented by an association of black Baptist churches in his hometown of Greenwood, South Carolina. It was one of Talley's formative theater experiences, and by the time he reached college it was foundational.

"I even ended up doing 'The Crucifixion' as my dramatic monologue audition piece for Winthrop [University] and received a First Night Scholarship," Talley remembers.

In the original preface, Johnson said that he'd prefer his verse sermons to be spoken aloud — or "intoned" — so it's natural that singing and dancing should be added to the package. The costuming — a mix of pastoral robes, choir robes and Sunday best — will remind us where we are.

"We begin like we are in a church service," Talley says. "Once the sermons build, we take on various locations and time periods. Our choir is absolutely amazing, and the audience will probably want to stand up, sit down and say, 'Amen!' All are encouraged to do so, but it's not mandatory."

Leading the choir in his first stint with OnQ is Dennis Reed, Jr., whose GAP singers (not to be confused with the GAP Band of the '70s and '80s) have worked with such notables as Fantasia, Bebe Winans, New Kids on the Block and Shania Twain. On this gig, Reed is auditioning the singers, picking the songs and penning the arrangements.

Will Reed fire up his newly formed choir with righteous gospel music played on a hallowed Hammond B3 organ? He responds with a hearty laugh: "That's correct. You'll hear the B3, piano, bass and live drums.

"Much of the black church tradition is rooted in live music," Reed adds. "What's really cool is that we are taking a little liberty with song choice. We will fuse traditional hymns, Negro spirituals and even new elements of music such as hip-hop loops. As far as choreography goes, we'll see a lot of it come together in practice and much of it happens organically."

Though he has never worked with Talley before now, Reed is a fan. A graduate of Charlotte's Northwest School of the Arts, Reed has numerous musician and singer friends who have collaborated with Talley and OnQ — and Reed's ties to Charlotte are strong. He founded Inspire the Fire here more than 15 years ago, when he was 17, to bring the arts to young people between the ages of 10 and 21. For that, Reed earned Community Leader of the Year honors at the 2015 Queen City Awards.

GAP stands for God's Appointed People, so gospel music and God's Trombones should be as much up Reed's alley as it is Talley's.

In the piece, Johnson constructed his sermon suite using "vague memories" of sermons he had heard or collected, and their subjects are familiar church staples. The typical old-time African-American preacher, Johnson wrote, "preached a personal and anthropomorphic God, a sure-enough heaven and a red-hot hell. His imagination was bold and unfettered. He had the power to sweep his hearers before him; and so himself was often swept away."

Aside from "The Creation," poet Johnson hearkens back to the Old Testament in sermons on Noah and Moses. Christian themes include the Prodigal Son, the Crucifixion, Judgment Day and a non-scriptural funeral sermon. 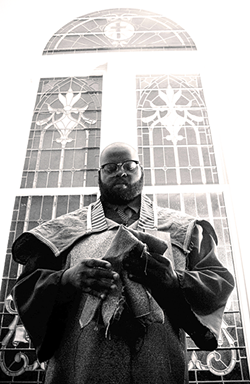 "Each sermon will have a different approach," Talley promises. "Most are recited, some acted out or sung, some are poetry slam form, but all have down-home preaching undertones."

A mix of OnQ ensemble regulars and authentic preachers will deliver the sermons. Familiar OnQ faces include Omar El-Amin for the Prodigal and Ron McClelland for the Crucifixion. Slam poet extraordinaire Bluz leads us aboard Noah's Ark, and Q himself orates "The Creation." Preacher Yolanda Bynum will launch the show with Johnson's "Listen Lord" prayer, and Rev. Madeline Salder will lean into "Let My People Go."

Johnson intended us to hear trombones when his verse was read aloud, as they authentically replicated the sounds of the preachers of his youth. Listening to trombone, Johnson heard expressive capabilities, beyond other instruments, which approximated "the varied range of emotions encompassed by the human voice — and with greater amplitude."

Of course, it's fascinating that Talley, in reviving this Johnson gem, is hearkening back to his own youth, positioning himself to capture some extra flavors of its spirit.

"This show has been on our list for years but never really fit with themes we've had in the past couple of years. With this season's theme being 'Redemption Song,' it fit perfectly," Talley says. "As artistic director, after 11 years of producing ups and downs, this show is a reminder to keep the faith. Running an arts org is taxing physically, emotionally, financially and spiritually, and sometimes you need a reason from a higher power to keep going, especially at the end of a season."

Sometimes you also need to check out a worthy writer like Johnson, who has unjustly fallen from his loftiest esteem, perhaps because of the folksy, down-home flavor of God's Trombones. Or perhaps because today it's more appropriate to say black or African-American than Negro. Both of those trivial reasons evaporate when you delve into Johnson with any depth.

Start with The Autobiography of an Ex-Colored Man, or with Johnson's actual autobiography, Along This Way, in which he observes:

"On occasions, I have been amazed and amused watching white people dancing to a Negro band in a Harlem cabaret; attempting to throw off the crusts and layers of inhibitions laid on by sophisticated civilization; striving to yield to the feel and experience of abandon; seeking to recapture a taste of primitive joy in life and living; trying to work their way back into that jungle which was the original Garden of Eden; in a word, doing their best to pass as colored."

Some things don't change. And it is this keen intelligence that is embedded in God's Trombones.