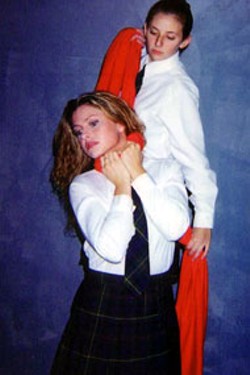 Over the years, Chickspeare has marched their all-girls-all-the-time mission over a wide range of the Bard's comedies and tragedies. All those Elizabethan works, as Shakespeare In Love reminded us, were originally written for an all-male theater company back when acting was becoming a viable profession.Recently, the Chix have branched out into contemporary repertoire, bringing us Maria Irene Fornes' Fefu and Friends and Paula Vogel's Desdemona. Those contemporary ventures, however, pounced on pieces that were originally written for all-women casts.

Now with their gender switcheroo on Shakespeare's R&J, Charlotte's Chix are stomping onward into unconquered territory. They're taking on a contemporary Off-Broadway hit that turned heads in 1998 when director/adaptor Joe Calarco transplanted the most famous lovers in literary history into a regimented Catholic boys' school.

Quite a retro concept after centuries of co-ed casting -- and decades of productions that labored to liberate the Bard from the schoolhouse. Suddenly we witnessed the ancient pentameters and couplets speaking powerfully to adolescent schoolboys at the moment of sexual awakening. What flowers between the boys, goaded on by the most romantic of tragedies, are the first inklings of homoerotic attraction. We realized that the repressiveness of the religious school is perhaps cultivating a hotbed for such unexpected fruit. Before Boston hit the headlines.

Apparently, director Joanna Gerdy and her cast have approached this project through Calarco's text without access to his production. Or vivid memories of adolescence. They do a fine job illuminating and freshening some of the less familiar passages. Mercutio's soliloquies, in particular, have fresh bite delivered by Andrea King as Student 3. And the stud repartee of Romeo's kinsmen, between King's Mercutio and Dana Childs' Benvolio (Student 2), is redolent with randy innuendo.

But institutional repression hasn't altogether taken hold at Gerdy's girls' school. So the balcony scene is just the balcony scene. None of the new electricity flows into the billing and cooing that I saw in the original Off-Broadway production where the breakdown of modesty, squeamishness and stigmatization were all palpable.

Instead, we get Meghan Lowther as Romeo and Childs as Juliet doing the scene as if this were an ordinary Chickspeare rendition of the Bard's work. King radiates heated emotion watching the intimacy between Students 1 and 2, but it looks more like jealousy than outrage. Although there's energy to spare in the exuberant by-play between the students, it's never girlish high school by-play.

To be fair, after Romeo slew Tybalt, Calarco had little fresh to say -- either in his text or stage direction -- until the schoolbell tolled our students back to their everyday regimentation. A certain idolatrous timidity toward Shakespeare taints the audacious concept. In notes replicated in Chickspeare's playbill, Calarco tells us that the school is a place "where simply reading Shakespeare is forbidden." But that -- and so much more -- is never explicitly dramatized onstage.

So overall, Gerdy does a creditable job maintaining the coherence of our story, with fluid lighting design from Amber Hyatt. Rounding out the cast is the voluptuous Johanna Jowett, delivering the most authentically amateurish performance as Tybalt, Juliet's Nurse, and Student 4.

As the fickle Nurse, Jowett's accent migrated -- thickly -- from Ireland to Italy by way of Spain. Quite believable when judged as a showy student performance. So is Jowett out of step with Gerdy's concept and the rest of the cast -- or are they out of step with her? That's one of many nagging questions you'll have to settle for yourself during this richly layered 2-1/2-hour girl-illa presentation.

Keeping her pinkies down

When she was earning her master's degree at Eastman School of Music, Raleigh native Teresa Winner Blume never dreamed she'd be singing a pants role in her home state. But after meeting her husband-to-be, Kevin, in Eastman's voice program in 1997 and marrying two years later, the couple auditioned for Opera Carolina's resident artist program. To their great delight, both Blumes were awarded contracts for the 2002-03 season.So this week, Teresa takes center stage -- in the title role -- as Opera Carolina brings Amahl and the Night Visitors to Spirit Square. Teresa will triumphantly toss away Amahl's crutches three times at McGlohon Theatre, first on opening night this Friday at 7pm, then in Saturday encores at 11am and 2pm. Kevin will portray the most august of the kingly visitors, Melchior.

Gian Carlo Menotti originally wrote his most beloved opera for TV in 1951, intending the role of Amahl for a boy soprano. That's the way it's usually done.

"I had never actually seen Amahl with an adult woman playing the role before," Teresa admits. "But I think it works, and it's beautiful music. I'm not an especially tall person, so it works out OK for me to be believable as a child."

Her baritone spouse concurs. "Also with the shortened rehearsal schedule that we have for this particular production," Kevin points out, "it's a lot easier for everybody around to have an adult in the role of Amahl instead of a young boy."

Teresa sees a kinship between Amahl and The Marriage of Figaro, both of them entertaining and brimming with beautiful music -- suitable as gateway operas for people wary of opera. "But the biggest thing," she adds, "is that this story is so beautiful, and it's a very hopeful story. "

The Blumes still have a heavy load ahead of them after Amahl. They're back on the road for four weeks, crisscrossing the Carolinas with the company's Opera Outreach production, Seymour Barab's Little Red Riding Hood. Then in March, the Blumes make their OC mainstage debuts in Gilbert & Sullivan's The Mikado.

"This is my first pants role," stated Teresa. "It's a challenge. I have to pay attention to my pinkies. That's what I noticed when we were rehearsing in front of a mirror. My pinkies are always up, which is not a boy quality."