Grandma knows best the secrets of sweetness and light 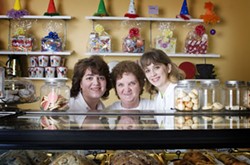 Much has been made of the exodus of snowbelters to the greener golf courses (er, pastures) and cheaper rents of the sunny South. Charlotte is virtually overrun by (I mean, has welcomed) thousands of new residents from these colder climes. Many of those new residents bring with them some of the ethnicity and foodways this region missed during the past 150 years.

This brings us to Nona's Sweets: Dolci alla Nona. Bakers & Chocolatiers, an Italian bakery co-owned by Jo-Ann Morlando. (Nona is Italian for grandmother.)

"I just got tired of shoveling snow," says Morlando, a native of Endicott, NY. "After shoveling the driveway three times on the same day, living there wasn't fun anymore."

So Morlando and her husband, Nick, who run a construction company together, moved to the South, to Charlotte. Their son's family and daughter's family relocated here as well.

Once here, the family, with roots in the southern Italian areas of Naples and Calabria, couldn't find the foods that were plentiful in the North, where many of the descendents of the original influx of the Italian immigrant population settled. Morlando said she couldn't find the bread, the meats (until she found Ferrucci's Old Tyme Italian Market, in Cornelius), and the cakes and pastries that make life "sweet."

The family decided to go into business. In Dec. 2004, Morlando, with daughter Dominica Clementi and daughter-in-law Anne Morlando, faithfully began reproducing the family's secret recipes at Nona's, a charming bakery in the university area.

"Italian women grow up cooking," Morlando says. "I learned from my mother. She from her mother. Family recipes are passed down." Many of the recipes at Nona's are from her husband's mother's family.

Evidently, it is also an Italian tradition for one ingredient to be left out. Morlando recounts the amusing story of one sister (she has six) who was taught how to make family cookies by her mother-in-law. But after following the hand-written recipe faithfully, her cookies ran together in a mess on the cookie sheet. The distraught sister took the recipe to her mother, who reassured her that she had done nothing wrong. The new mother-in-law had -- oops! -- forgotten to list flour.

Anyone who has spent time in Italy has been to a pasticceria. One of the Neapolitan treats you will find there is the sfogliatelle (sfo-lyah-TAY-lay). This shell-shaped pastry is traditionally made della nobilita, for the nobles. Morlando makes an outstanding sfogliatelle. Delicate folds of pastry dough form leaves that envelop a mixture of ricotta cheese, semolina and orange peel. Served warm, it tastes of Christmas morning and Sunday baptisms.

Other pastries include cannoli, sticky buns, cream puffs, pasticciotti and a Francophile chocolate éclair. Italian cookies are not to be missed -- delicate lemon and Italian wedding cookies, biscotti, anise sprinkle cookies, almondettes, pizelles and apricot shortbread. Italian baking is not overtly sugary. The flavors are subtle and elegant, like an Armani suit. Warm licorice tones appear in one cookie, another is pitched by almonds.

Even if you don't like Italian baked goods, there's more at Nona's. The Morlandos import chocolate truffles from Belgium, but make the fudge and candies in-house. The menu features a variety of cakes for all occasions, including birthdays, weddings and other events. Among the cakes are Papa's Toasted Almond, a two-layer cake with almond butter cream; Italian cheesecakes; tiramisu; Italian Creama, a raspberry glazed coconut, pineapple and pecan cake with cream cheese icing; and the Duomo, a dome-shaped cake filled with strawberry, chocolate, amaretto or peanut-butter mousse. More common cakes include carrot, Boston cream and Black Forest.

When Morlando and her partners opened Nona's Sweets, the first priority was to the family. "The children are the most important part," says Morlando. "We take turns being with the children." The grandmothers are a close second. On one side wall is a line of photographs of kind-looking Italian women.

"I often think they are watching me," Morlando says. "I like to think this shop -- making their recipes -- would make them happy." How could it not?

Pacific and Vine in SouthPark Specialty Shops closed ... Opening in March is Nolen Kitchen, a new restaurant from chefs Stratos Lambos and Angelo Kaltsounis, co-owners of Ilios Noche. Lambos said, "We'll have continental food with the same flair as Ilios Noche, same price points, no linens." The renovated interior and kitchen is, according to the owner, "very sexy." Restaurant will house the Crescent Bar Lounge, with soft seating and fireplace. In the kitchen will be Chef Joseph Morrison, who has been at Ilios for nine months and also was with Lambos at Aureal in New York City. Nolen Kitchen will occupy the space of the old Caffe Frappe, at the corner of Colony Road and Selwyn Avenue.