Reginald Bell Jr. is coaching from the couch 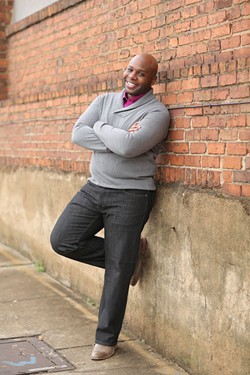 When it comes to relationships, there's plenty of reason to be cynical. We're taught at an early age to aspire to find our "soul mate," but, once thrown into the dating pool, we splash, we choke and — after countless dates and relationships gone wrong — we sometimes even sink.

Luckily, we have endless self-help, relationship books to foster a fresh state of mind — that is, if we're willing and ready to accept a stranger's words of advice on matters of the heart.

Local Charlotte author and relationship counselor/coach Reginald Bell Jr. wanted to make getting schooled in the art of relationships fun. That's why his new book, Love: From the Big Screen To My Life Scene, analyzes love lessons through scenes from some of his favorite TV shows and films.

The 260-page book includes subject matter related to films including The Fault In Our Stars, The Notebook, The Hunger Games, Eat Pray Love and Fifty Shades of Grey and TV shows including Scandal, Family Matters and Friends. But as it turns out, Titanic, which is also one of Bell's favorite films, didn't make the cut. After compiling a lengthy list of movies and shows, he chose not to include the sinking ship. (And we thank him for that — even though there's probably a love lesson to be learned in the drowning process.)

Bell's approach to using characters and scenes from the big screen to pinpoint lessons that can be applied to relationships makes for an interesting read. Though males and females can relate, women are his target audience.

"I have lots of female friends and we're always having conversations about relationships and I end up giving dating advice," says Bell, who has worked as a professional relationship counselor and coach since 2008.

The book, released by Bell Tower Publishing earlier this year, is filled with his own humor and bluntness, but its purpose is to help ladies in "snagging you a boo thang."

"Everybody loves that movie and they talk about the sex scenes, but that movie is about so much more," Bell says. "I was talking just the other day to a guy that is dating a woman and he casually talked about how they had sex and how he is mad about some other stuff, outside of sex."

In that chapter, he covers topics about how we choose a mate, dealing with exes and platonic friends, learning to compromise, detecting lies and accepting extravagant gifts.

Based on whatever situation you're in, it's OK to skip around to chapters that apply more to your current "life scene." He includes the chapter on Eat Pray Love for the most cynical of his readers and for those who need to take a closer look at themselves before seeking out a partner.

When asked what chapter he relates the most with on a personal level, Bell says it's "Family Matters." He compares himself to the likes of the spectacle-wearing, suspender clad nerd, Steve Urkel.

"He's the nerdy guy, he's the awkward guy and he's the guy you may go out with the first time and not give a chance," Bell says. "But if you have a conversation with him and if you really try to get to know him or change some of your expectations, who knows what your experience will be. So, I relate most with [the chapter's sub-section] 'Do the Urkel.'"