Lara Americo doesn't let an urgent cause prevent them from getting things done — yesterday. That's how Americo's recent compilation, Never Illegal, came about.

The Charlotte musician, artist, activist and award-winning Creative Loafing contributor quickly realized there was a need to get funding down to the Refugee and Immigrant Center for Education and Legal Service (RAICES), and to get the word out to music fans across America that what's been happening on the U.S.-Mexico border is wrong in every moral and ethical sense possible. It's downright un-American.

"My mother was an immigrant and if she had come here when Trump was in office, she might have been in the same situation, and I might have been stuck in some ICE detention center [as a child]," Americo, whose mother is from Mexico, says. "I just thought, 'That could have been me!' And I needed to do something."

What Americo did was put the word out that they were compiling songs from artists across the United States that speak to the horrendous conditions of families being torn apart, and to the egregious moral failures of the Trump administration. 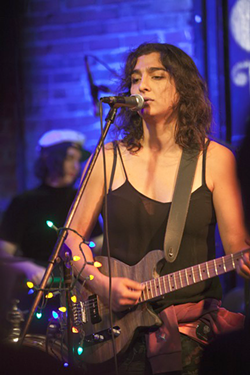 The response was overwhelming.

New York City-based Amanda Palmer, formerly of Dresden Dolls, the duo Evelyn Evelyn, and of course Amanda Palmer and the Grand Theft Orchestra — and still one of the nation's finest singer-songwriters — signed on. So did New York City shoegazers The Veldt, New Jersey's Screaming Females!, and multimedia artist Mark Snyder, whose stunningly gorgeous, gauzy version of "The Star Spangled Banner" gives Hendrix's wild pyrotechnics on the national anthem at Woodstock a run for its money.

And so did the Charlotte rock band Trash Room.

"When we heard about the Never Illegal compilation, we immediately wanted to submit our song 'Silence Equals Defeat,'" Trash Room bassist Angel Beeson says. "That song was written with the current administration in mind, and it reflects our stance on how immigrants are being treated in our country."

Amber Comber, Trash Room's vocalist and songwriter, says she was saddled with disbelief when the current president was elected. She chose to air her feelings in her music and her political activism.

"I marched during the Black Lives Matter protest, searching for hope that we would become better as a country. I volunteered as a clinic escort, because I am frightened at how quickly clinics are closing and how it's become dangerous for women to seek care that is legal," Comber says. "Watching children being torn from their parents was something I never thought could happen."

And yet it did.

That utter disbelief is what motivated Americo to move so quickly with the Never Illegal project. Americo came up with the idea for it just a week ago and it's already available on Bandcamp.

"I figured the best thing I could do is raise money with music," Americo says. "I had a friend message me wanting to make a track together and it snowballed into this album." Americo, who performs with their partner Joanne Spataro as JoRa, appears on the track "To Feel Your Presence," by their friend, who performs on the compilation as Mama.

All of the money, except for the small cut Bandcamp takes, will go to RAICES.

"At first, I figured a track would be great, but an album would be even more powerful and raise a lot more money," Americo says. They contacted Palmer, who had appeared with Americo on another compilation a few years ago, Hugs for Chelsea, in support Chelsea Manning, who had just been released from prison. That comp had included Michael Stipe, Tom Morello, Thurston Moore of Sonic Youth, Against Me!, Crosby, Stills & Nash legend Graham Nash and hip-hop artist and activist Talib Kweli, as well as Palmer.

The track listing on Never Illegal is a bit more underground than Hugs for Chelsea, but it's no less important or good.

Americo has been so busy putting the project together that they've hardly had time to promote the album. That's where Creative Loafing comes in. We wholeheartedly support this cause and almost anything else our colleague Americo does.

Listen to Never Illegal here, then go to the link and buy it to help reunite immigrant families: