One thing becomes clear after spending just a short time in DeAndrea Salvador's small office, tucked into the back of the Hygge West co-working space on Remount Road: she's a minimalist.

When Creative Loafing stopped by on a recent morning, her desks were cleared, with just a laptop, a bottle of water and a lone KitKat Bar visible at her workstation. What was not so apparent to the untrained eye was the absence of something so abundant in today's workspaces: outlets crammed with plugged-in tech. There were no phone chargers plugged into the wall, no idle coffeemakers or mobile devices on standby. These are all things Salvador calls "energy vampires," using power despite not being in use themselves.

Salvador, executive director and founder of the Renewable Energy Transition Initiative, is not just a minimalist when it comes to the tangible. While her clean workspace portrays a personality trait, Salvador is foremost an energy conservationist, and is currently fighting on the front lines in Charlotte's battle against energy poverty, a term that refers to situations in which an individual or family spends 10 percent or more of their income on energy costs. 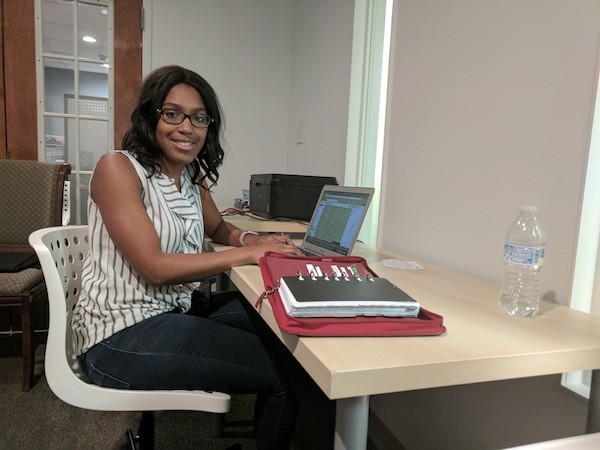 Salvador has been working in and around Charlotte's low-income neighborhoods to raise awareness about energy poverty and what families can do to fight it. Her plan for RETI is to eventually set up shared solar programs in low-income communities to help fight back against energy poverty on a broader scale, but until that becomes a reality, her organization is holding workshops throughout the city to help inform residents about what they can do in their own homes to lower energy costs.

Nakisa Glover, a community organizer who sometimes volunteers with RETI, said that energy poverty has become all the more important as the effects of climate change become more apparent.

"As the climate changes, communities who are already overburdened through other issues in the community, they will be the ones who will face the most severe threats of climate change," Glover said. "We're having hotter summers, that is a bigger demand on your energy usage, and so we have to understand that this is something that's important to bring awareness to."

Now, folks already struggling with energy poverty might find themselves in worse shape, as Duke Energy Progress proposed a rate hike in June that, if approved by the N.C. Utilities Commission, would see residential rates rise by 16.7 percent. It would be the largest rate hike from the utility giant since the 1980s.

Duke has asked that the ruling be made in time for new rates to go into effect at the start of 2018.

"[The rate hike] makes it all the more important. That 16 percent might mean a Chick-fil-A meal for one person in the community, but that may mean medication for someone else," Glover said. "We're talking about communities who already are faced with barriers to healthcare access. We're talking about communities that are aging — a growing senior population on fixed incomes — and when you talk about increasing their energy costs, that's just one more thing on top of all this mountain of other things that our neighbors are dealing with. We have to see people as people. We have to be aware that people can't just absorb the hike."

Last year, the American Council for an Energy-Efficient Economy released a report that ranked America's 48 largest cities by the value of their energy burden, meaning what percent of income residents spent on energy. Charlotte was ranked as having the 14th highest energy burden in the country.

Unsurprisingly, low-income homes shouldered the highest burden. The median household in cities involved in the study spent 3.5 percent of their income on energy bills, that number more than doubled to 7.2 percent in low-income households.

While energy poverty clearly ties in to economic poverty, it also has to do with housing. Energy bills skyrocket in homes that aren't built to the same standards as middle-class and high-income homes.

Because increased energy spending often cuts into spending on other neccessities like food and healthcare, energy poverty often leads to drastic quality-of-life problems. Residents suffering from high energy burdens are at greater risk for respiratory diseases and increased stress, according to the report. A separate Columbia University study also showed that people struggling with energy poverty are more likely to be food insecure, added Salvador.

"They have less of a calorie intake, and there's a plethora of other potential risks for the entire family ranging from the children and mental health issues to the elderly not being able to pay for medicine," she said.

Though some programs are in place to help these residents, they barely make a dent in what is needed. North Carolina receives about $88 million in federal funds a year from the Low Income Energy Assistance program. Of the 1.5 million North Carolinians who qualified for the program last year, only 6 percent received assistance, and even then only for about a month.

On a local level, Salvador is currently working with the city of Charlotte to help them create affordable, energy-efficient "Smart Homes" in the North End district, and she regularly holds workshops in areas that experience high levels of energy poverty to help educate residents about energy efficiency.

On Saturday, September 30, Salvador and a group of volunteers held an Energy Hero workshop outside of the Arbor Glen Outreach Center. Other local organizations like Sustain Charlotte and Habitat for Humanity were on hand to help residents learn about energy efficiency. 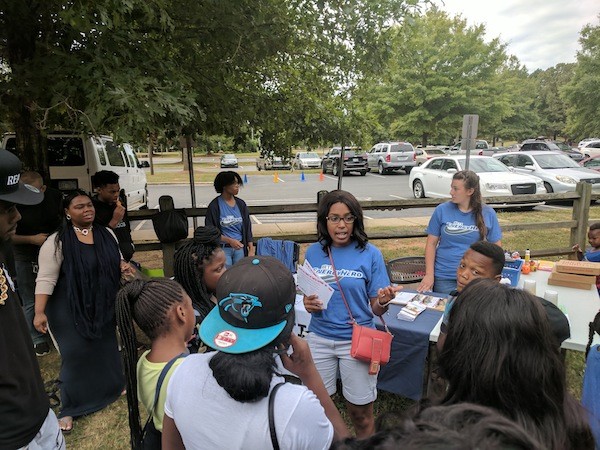 "It's important to know about the problem, because if you don't know a problem exists it's very difficult to fix it," said Salvador. "It's also important to understand that there is, of course, a limited capacity about what each person can do for any issue. But even small steps help."

Salvador and other RETI volunteers handed out water heater gauge cards, which residents can stick under running water to see if their in-home water heaters are turned up too high. If so, simply going into the garage or attic to turn it down can save them money. They also educated kids about energy vampires like cellphone chargers that continue to use energy even when not plugged into a phone.

"I think it's very easy when we hear about energy efficiency to think, 'Oh I'm going to have to tear down a wall,'" Salvador said. "There are other things that can be done that can create that first step on the pyramid without feeling overwhelmed, and that's really what we want to show."

Salvador was recently approached by the city of Charlotte to help with education and engagement around a Smart Homes program in the "North End Smart District," just north of Uptown, bordered by North Davidson Street, Atando Avenue and interstates 77 and 277.

She said she's excited that city officials have given those who live in the community the power to make decisions about the project, rare in a rapidly growing city.

"We are really thrilled because, although the city of Charlotte has garnered the funds, it's really been led by community leaders," Salvador said. "Community leaders are making the decisions about what improvements can be made to homes, how to best communicate that to residents and what additional partnerships to pursue."

It sounds like a perfect fit for Salvador, whose original idea for RETI came from the desire to help a neighbor.

Salvador grew up in the Yorkmount area in southwest Charlotte. Her grandparents lived in the same house their entire lives, and a neighbor across the street would come over regularly, complaining about the fact that she couldn't get her house to a comfortable temperature.

About five years ago, Salvador started looking into ways she could help this woman, who was retired and living on a fixed income. Salvador found some promising resources, but nothing that would stick for the long term.

Her original dream was to create a nonprofit that would be "more of a sweat equity, barn-raising, renewables-directly-on-homes type of program," as she described it. She quickly learned of the barriers facing that sort of program, from legislative limits on North Carolina's solar programs, to logistical difficulties like home location and an abundance of rental units in low-income neighborhoods.

Still, she continued her research, and in 2013, applied for the SEED20 program, which helps coach emerging and existing nonprofits through the launch of new programs and sets them up to compete for grant money. Salvador was not awarded any money, but the experience helped her hone a vague idea into a legitimate plan, and she was able to launch RETI with her own money.

When she first started contemplating RETI, she had no idea the widespread regional problem energy poverty had become, but she learned quickly.

"As I was looking into it I saw more and more that there wasn't anything sustainable," she recalled. "When I dived deeper, I saw how big the issue was, how it expanded not just into my grandmother's community, but all over Charlotte, all over North Carolina and all over the southeast."

Of the cities ranked by the highest energy burdens for low-income households in the ACEEE report, the top four — Memphis, New Orleans, Birmingham and Atlanta — are located in the South. Salvador said that low-income residents in the South are more vulnerable due not only to extreme weather in the summer, but to politics as well.

"Despite the southeast having the lowest utility rates, we have the highest cases of energy poverty," she said. "Why is that? Because when other states like California decades ago really started to look at energy efficiency and some of the building quality standards, it just wasn't as much of a push here."

The residents of Charlotte's more marginalized communities can take comfort, however, in knowing that one of their own is now pushing back.