Deadpool, In a Lonely Place, Who's Afraid of Virginia Woolf? among new home entertainment titles | View from the Couch | Creative Loafing Charlotte
Switch to the mobile version of this page.

Deadpool, In a Lonely Place, Who's Afraid of Virginia Woolf? among new home entertainment titles 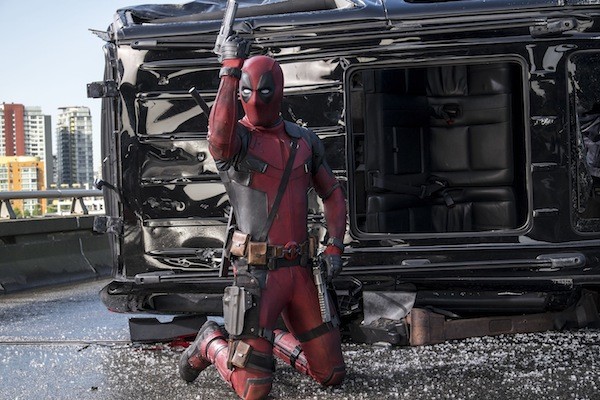 DEADPOOL (2016). A superhero romp that threatened to be smug, smarmy and self-satisfied is — well, yes, it’s occasionally all those things. But it’s also fresh, funny and absolutely kick-ass. Ryan Reynolds previously played Deadpool in 2009’s X-Men Origins: Wolverine, but that interpretation has been axed to clear the way for a new direction. Reynolds’ Wade Wilson is a scrappy loner, a mercenary who unexpectedly finds romance with the tough and beautiful Vanessa (Morena Baccarin). Suddenly, it’s a wonderful life for our mouthy maverick — at least until he discovers that cancer has stamped an expiration date on his life expectancy. With nothing to lose, he agrees to undergo an experimental procedure; the surgery eventually provides him with amazing recuperative powers, but first it leaves him at the mercy of the torturous machinations of villains Ajax (Ed Skrein) and Angel Dust (Gina Carano). Wade soon escapes, picks up the moniker Deadpool, and sets about proving that revenge is a dish best served not only cold but also hot, frozen, lukewarm or any other temperature just as long as it’s served. While other heroes eventually enter the fray, this is The Ryan Reynolds Show from beginning to end, with the actor clearly relishing the opportunity to rescue this character from being merely relegated to future Trivial Pursuit status following his Wolverine guest-starring role. The relationship between Wade and Vanessa is unexpectedly touching, which allows a break from the otherwise nonstop snark. The visual effects are serviceable rather than sizzling, but they get the job done. As for the Stan Lee cameo, it’s a keeper. ‘Nuff said.

IN A LONELY PLACE (1950). With so many acknowledged classics to Humphrey Bogart’s name — Casablanca and The Maltese Falcon and The Treasure of the Sierra Madre and so on and so forth — it was perhaps inevitable that at least one masterpiece would get lost in the shuffle. That would be In a Lonely Place, a beautiful yet devastating piece of cinema that operates as a bleak film noir, a compelling murder-mystery, a scathing critique of Hollywood, and a character study of penetrating depth. In one of his greatest performances, Bogart plays Dixon Steele, a has-been screenwriter now known more for his violent temper than his former successes. He balks at adapting a trashy novel until a young hatcheck girl named Mildred (Martha Stewart) volunteers to come over to his apartment complex and help him work through it. The next morning, her corpse is discovered, making Dixon an immediate suspect — fortunately for him, new neighbor Laurel Gray (Gloria Grahame) finds him interesting and provides him with an alibi. Dixon and Laurel begin dating, but mitigating circumstances and Dixon’s own paranoid behavior lead Laurel to wonder if he might indeed be the killer. Nicholas Ray directed a number of fine pictures (most notably the masterful Rebel Without a Cause), but this ranks as his pinnacle, with its evocative use of shadows, its themes of mistrust and persecution (a nice fit for the Red Scare era in which it was made), scripter Andrew Solt’s hardboiled dialogue (“It was his story against mine, but, of course, I told my story better”), and superb performances from Bogart and Grahame (then Ray’s wife) combining to produce a genuine American gem.

Blu-ray extras include audio commentary by film scholar Dana Polan; a 1975 documentary about Ray; a 1948 radio adaptation of the original novel by Dorothy B. Hughes; and the theatrical trailer. 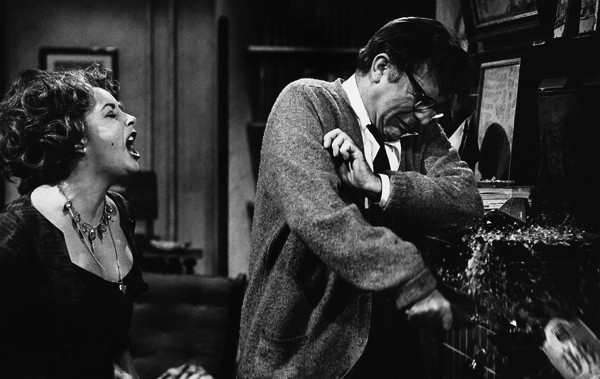 WHO’S AFRAID OF VIRGINIA WOOLF? (1966). A landmark production that also marked the directorial debut of Mike Nichols — he would helm The Graduate the very next year, deservedly winning the Oscar for his efforts — this blistering adaptation (by Ernest Lehman) of Edward Albee’s play sparked a hailstorm of controversy at the time of its initial release. Richard Burton and Elizabeth Taylor are sensational as, respectively, college professor George and his wife Martha, whose bloody verbal battles are tumultuous enough to ensnare a young couple (George Segal and Sandy Dennis) who have no idea what sort of evening the older pair have in store for them. With its frank dialogue and adult themes, this became the first film to earn the designation, “No one under the age of 18 admitted without a parent or guardian,” and its envelope-pushing (along with similar edge-shredding by 1965’s The Pawnbroker and 1967’s Bonnie and Clyde, among others) helped pave the way for the restrictive Production Code to be replaced by the MPAA rating scale that (with some minor modifications) we still have today. Nominated for a whopping 13 Academy Awards (including bids for Burton, Segal, Nichols, Lehman and Best Picture), this earned five Oscars, for Taylor’s lead performance, Dennis’ supporting turn, Haskell Wexler’s cinematography, the art direction/set decoration, and the costume design. It’s one of the Academy’s black marks that Burton didn’t win the Best Actor Oscar for his remarkable, career-capping performance.

Blu-ray extras include audio commentary by the late Nichols (who passed away in 2014) and fellow director Steven Soderbergh; separate audio commentary by the late Wexler (who passed away last year); a making-of featurette; a piece on the controversy; the 1975 TV documentary Elizabeth Taylor: An Intimate Portrait; Dennis’ screen tests; and theatrical trailers for four Taylor-Burton films. 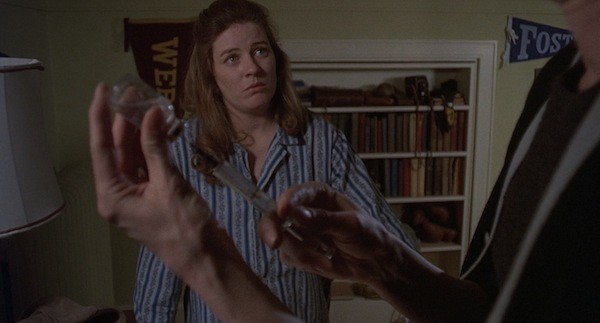 YOU’LL LIKE MY MOTHER (1972) / THE LITTLE GIRL WHO LIVES DOWN THE LANE (1976). Two Oscar-winning actresses; two former child stars; two disturbing dramas set inside houses harboring secrets. It all adds up to two worthy sleepers from the 1970s.

Before Patty Duke headlined You’ll Like My Mother at the age of 25, she was already a seasoned veteran, having portrayed Helen Keller in The Miracle Worker at 15 (and winning the Best Supporting Actress Oscar for her superb performance) and spending her late teens playing twin cousins Patty and Cathy Lane on the popular TV sitcom The Patty Duke Show. She’s impressive here as well, cast as a soldier’s pregnant widow who journeys to meet his mother (Rosemary Murphy) at her snow-battered Minnesota home. Mrs. Kinsolving unexpectedly treats her daughter-in-law with contempt, and while the reason behind her behavior soon becomes obvious (and makes one wonder if M. Night Shyamalan saw this before penning his most recent picture), the film still scores as an effective thriller. 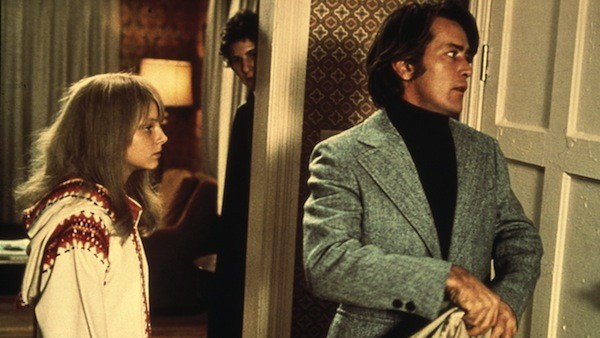 Even better is The Little Girl Who Lives Down the Lane, just one of five films 13-year-old Jodie Foster made in 1976 (the batch also included Taxi Driver, which nabbed the frequent Disney star an Oscar nomination for a decidedly non-Disney role, that of an underage prostitute). Foster plays Rynn, who lives with her poet dad in a rental home owned by the nosy Mrs. Hallet (Alexis Smith). But Father never seems to be around, which raises the suspicion of not only Mrs. Hallet but also that of her grown son (Martin Sheen), known as the town pedophile, as well as a friendly police officer (Mort Shuman). The movie is packed with twists, and the performances by Foster and Scott Jacoby (as a local boy who becomes her only friend) are excellent.

Blu-ray extras on You’ll Like My Mother consist of interviews with Thomas and Allen; a photo gallery; and the theatrical trailer. Blu-ray extras on The Little Girl Who Lives Down the Lane consist of audio commentary by director Nicholas Gessner; an interview with Sheen; a conversation (on Skype!) between Gessner and Sheen; and the theatrical trailer.

Tags: View from the Couch, film, review, View From The Couch, Blu-ray, DVD, Matt Brunson, Deadpool, In a Lonely Place, Who's Afraid of Virginia Woolf?, You'll Like My Mother, The Little Girl Who Lives Down the Lane