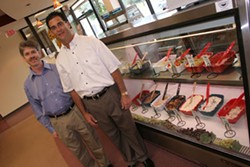 When I lived in New Jersey, even the very young knew the difference between Nova and belly lox, and a shikse like me got to know the inside out of buying lean pastrami. Visiting the kosher groceries were some of my earlier memories of exploring a culture through food. During undergraduate school, the very tolerant Ashkenazim parents of my then-boyfriend instructed me on not mixing dairy and meat (although I ended up embarrassing myself by ordering a Coquille St. Jacques, a dish chock full of dietary restrictions).

Later, when teaching in Egypt, I met a Sephardic family with whom I explored the flip side of Jewish food: the food of the Mediterranean, Middle East and North Africa, which included handmade sesame-sprinkled pastries filled with cheese, kibbeh and falafels. Yes, falafels. It seems everyone living near the old Levant -- the Palestinians, the Israelis, the Jordanians -- all claim the falafel as their own.

Obviously, preserving ancient traditions is important; to Orthodox Jews, it's part of their life to maintain the Kashrut -- Jewish Laws dealing with foods and food preparation. Kosher is not a cuisine type like, say, Sichuan Chinese. In fact, Chinese dishes may be kosher if prepared per the Kashrut's guidelines.

Most people know that certain animals can't be eaten under the Kashrut. Sheep, cows, goats and deer are kosher, but camel, rabbit and pig are not. Also: only certain cuts from the permitted animals are allowed. Creatures from the sea must have fins and scales: lobsters, oysters, shrimp, clams and crabs are forbidden. Utensils that have come into contact with meat may not be used with dairy, and vice versa. Utensils that have come into contact with non-kosher food may not be used with kosher food.

Another guideline is that grape products made by non-Jews may not be consumed. This rule may appear uncomplicated if you are just thinking about wine. After all there are many Jewish wineries across the world. But grape juice is used to sweeten many products. And the situation gets trickier with products containing wine by-products, such as cream of tartar which is a primary ingredient in many baking powders. Baking powders containing cream of tartar are used extensively in breads and desserts.

Keeping kosher has more guidelines, but it's easy to understand why a place that is certified as kosher would be desired.

In Charlotte, the Gleiberman brothers, Robert and Jeff, own Gleiberman's Deli and Grille, Kosher Mart & Restaurant. Jeff Gleiberman opened his first store, the Kosher Mart, off Independence Boulevard in December 1990. The last kosher butcher had closed a year earlier. "We knew he was leaving, and planned to open soon thereafter," Jeff Gleiberman said. Their shop on Independence was primarily a grocery, with only a few prepared foods. This past March, the Gleibermans opened a much larger facility in Providence Square Shopping Center. "Charlotte has a large Jewish community and a growing number of people like eating kosher," Robert Gleiberman noted.

At the helm of the kitchen is Brooklyn-native Chef Jason Fridrich, a graduate of Johnson & Wales University, Charleston Campus, who has worked in kitchens in New York and Boca Raton, FL. Said Robert Gleiberman, "kosher is a whole mind set, and while Jason is not Jewish, he is becoming familiar with kosher techniques."

In addition, Gleiberman's is under the supervision of Rabbi Youssi Groner who appears three times a day to make sure things are, well, kosher.

"Most customers will look around for the certification letter when they enter a kosher market. It's important that the place is certified," Robert Gleiberman added.

Gleiberman's interior is whitewashed, bright and clean. No sawdust on the floors here. For those who visited the shop on Independence, the number of deli items has increased exponentially. Now they offer rotisserie chicken, an entire menu of sandwiches and other deli items, including the large hand-cut, crinkle-cut French fries found in some NYC-area delis.

On hand are three styles of potato salads: New York (without eggs), Southern and Italian. There's also sandwich-sized mashed potato knish (the Eastern European street vendor's hot pocket), while the steam table offers corned beef and pastrami, which is on the fatty side.

In the frozen section are kosher meats and the elusive bialy -- a hard to find item in Charlotte. The refrigerated section also has Saba products and unusually good pita bread baked in Miami. Among the more popular grocery items are the black and white cookies and halva.