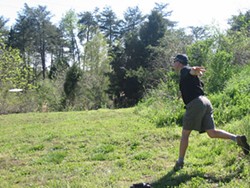 It started when a guy named Ed noticed how much fun flinging an empty pie tin could be. In the 1970s, the creator of the Frisbee, Ed Headrick, gave his invention bins and a purpose. The hacky sack crowd embraced the fusion of golf with Frisbee (Frolf), but in the last few years disc golf has entered a new phase: serious sport.

Sales on discs this year are up 40 percent, says Brian Wilson, a Charlotte disc golfer who owns an online disc company. A couple of years ago, disc golf was in the World Games, and Wilson doesn't think an Olympic appearance for the sport is out of the question. "If you got a big sponsor like Nike involved, it would take off," says Wilson and then quips. "We just need to get the hippies out of the sport."

"If someone gave me money to sponsor me all year, I'd clean up my act. What do you want me to wear?" says Michael Johanson -- or MJ as he is known on the links. MJ is what you might picture a disc golfer to look like. Bearded, with a long ponytail and usually in tie-dye, MJ is also Charlotte's highest world ranked player at No. 33 and can throw a disc 650 feet.

The smaller, heavier discs have evolved to be more like discus than Frisbee. While there are only 15 or so golf clubs a golfer can choose from, the range of discs can go as high as 100 (Most players only carry 20 with them in a round). The discs are divided into three main categories: drivers, mid-range, and putters. Over-stabile disks are made to turn to the left and under-stable discs to the right. For serious disc golfers, the color of the disc can make a difference. Color dye adds a miniscule amount of weight to the discs. Brighter colors make for heavier discs. Since the discs are made in an uncontrolled environment, says MJ, outside factors like humidity can throw off the balance, causing a disc to do weird things in the air. Before pro tournaments, he'll test out new discs.

I ask them about my favorite word, which is about 60 percent of the reason I wanted to write this article: so I could say Frolf. "We actually have a shirt that says 'never use the "f" word,'" Wilson tells me. Disc golfers don't like the word Frolf because Frolf is derived from Frisbee, which is a trademark name. Frolf, Wilson tells me, is Midwestern terminology. (Since I can't say it anymore after this paragraph, Frolf. Frolf. Frolfity-frolf).

Although the U.S. is the center for disc golfing, the sport is played competitively in other countries. Interestingly, the regional topography of a nation has created distinct national styles of play. In Switzerland for example, courses tend to be long and less wooded. As a result, Swiss golfers can usually drive the longest. Because of a lack of park space, courses in Japan are shorter, and players there have developed to be the most accurate.

There are five 18-hole and two nine-hole courses in Charlotte, largely due to the efforts of Stan Mcdaniel, a disc diehard that works for Charlotte Parks and Recreation. McDaniel and another Charlotte golfer are in the Disc Golf Hall of Fame -- sort of. The hall of fame, which is scheduled to be built in Augusta, Ga., is only a concept right now. But 40 or so players have already received the equivalent of promise rings -- plaques of induction.

Real golf isn't real golf to a disc golfer; it's ball golf. And like ball golf, conversation on the course is all about the game. They talk about good drives, hooking and slicing, whether or not someone is close enough to putt. They yell fore if a disc is thrown errantly to another hole. MJ tells me that despite being made out of plastic, getting hit with a disc is quite unpleasant.

In fact, there is a whole list of injuries that you may not have imagined occur on the disc golfing course. It is not uncommon to blow out an ACL in a knee, tear up the rotator cuff in your shoulder, sprain or break ankles on roots in the ground, or break a finger on a follow through against a tree. One of the best players in Charlotte had a career-ending knee injury not too long ago.

Like relics from a primitive era, the old cement starter platforms can be found through the holes, concealed by overgrown grass. Most of these old platforms, from the late 1980s are halfway between the newer starting platforms and the bin. The old platforms are dead straight to the target, not requiring the golfer to curve the disc around a range of trees.

Reedy Creek is a heavily wooded course and even for a pro like MJ, the trees are too much of an impediment to avoid. At least half of the drives, carom off trees.

On the seventh hole, they offer me a chance to throw a disc. I think about turning down the offer because I can't even throw a normal Frisbee straight. But if I can go naked for an article ("Food in the Nude," Sept. 6.), I can throw a disc fully clothed. By some stroke of luck, I threw the disc right on line. It bent with the angle of the hole and landed in the center of what would be the fairway in ball golf.

In our four-some is Tong Ron, a chef who acquired his nickname when he brought metal tongs with him to the course. At first he did it because a surgery limited his mobility. But once he recovered, he kept the tongs. Tong Ron was the most passionate player in our grouping, clapping for himself when he flung a good drive and slamming discs in his bag on bad putts (This was actually quite amusing to watch if you've ever seen a ball golfer slam or throw a golf club in anger. Somehow slamming a soft disc that can't break isn't quite as bad ass).

The U.S. Disc Golf championship will be held at Winthrop University's Gold Course in Rock Hill, Oct. 11 - Oct. 14. Like ball golf, loads of fans come out to watch the pros. On Oct. 15, Creative Loafing is sponsoring a fan day for anyone to come out and play the championship course.