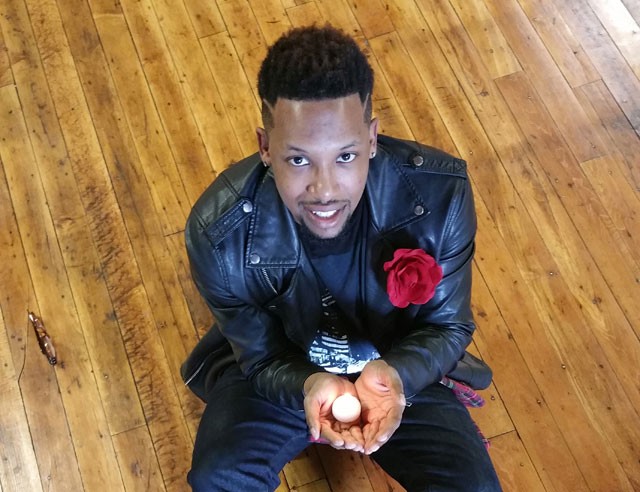 Dennis Reed Jr. offers a light to the world.

Dennis Reed Jr. wasn't even 10 years old the first time he performed in front of an audience. In full view of a church congregation of more than 500 people, Reed sang a song he calls "almost an old spiritual" — "I Know I've Been Changed."

Earlier this month, Reed was named Community Leader of the Year at the 8th Annual Queen City Awards for his work with Inspire the Fire, the nonprofit he started to bring the arts to young people ages 10 to 21. From singing, dancing and acting to poetry, visual arts and step, this multi-dimensional program that meets twice a month has impacted several hundred children and teenagers in the Charlotte area.

Through a number of partnerships, Reed plans to continue inspiring the "young professionals," as they're called. ITF's events this year range from trips to Atlanta and New York with the kids to Inspire the Fire Day in March to the big program, The Xperience, in July, where they'll put together an original musical in one week.

Leadership's always been comfortable for this 30-year-old, who says his performing age is 26. In fact, his mother tells him, when he was a toddler, he'd stand up on the back of the church pews and pretend to direct choirs.

When Reed was a student at Northwest School of the Arts, he says he felt like God was telling him to use what he knew — the arts — to impact people around him.

"There was nothing for young people to do, especially during the summer. It didn't matter whether you were Christian, atheist, Jew or whatever, the bottom line is you're young and you're stupid. Sometimes I'd find myself and my peers getting into bad things." Reed was 17 when he launched ITF. The first workshop, held in a church, brought in more than 150 kids and has since swelled to over 400.

"What started off as a grassroots church event turned into an urban Glee," Reed says.

But ITF isn't the only project he has his hands in. With a dream to "have great influence on people's lives through music, entertainment and positive content," the songwriter/performer is hitting the studios to help create new works for both GAP (which stands for God's Appointed People), his gospel group, and The Everyday Heroes, a combination of GAP and ITF.

Despite constantly being in the spotlight, Reed isn't the least bit full of himself. In fact, when I ask him to share a story with me about his most embarrassing moment in 2014, he readily relays a tale of accidentally splashing water on his khakis right before a performance at Knight Theater. "It literally looked like I took a major piss in my pants. I had to take the pants off really quickly in the dressing room. There was no heater or anything like that, so I'm just twirling the pants trying to air out this water. Fortunately, I was able to get it out before taking the stage."

The lesson he learned? "Don't turn on the spigot all the way to full throttle, especially before you perform."