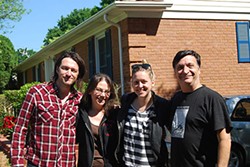 For many independent touring bands, the cost of a hotel room could break the bank — and who wants to pile up four people in one room to save money? Some bands have been known to sleep in their van in Wal-Mart parking lots while others commute to and from home and never travel outside a few-hour radius. A fortunate few are offered a chance to save a little money and stay at Charlotte's "Rock 'n' Roll Motel."

You could probably call them superfans, but the support Don and Laurie Koster give to musicians goes far beyond attending a show — or even offering a place to stay. For more than 11 years, Laurie has compiled a weekly events calendar that she posts online and sends to more than 2,000 subscribers. Don works part-time at the Evening Muse. Laurie has designed websites for some local and regional performers, including Malcolm Holcombe and the Tosco Music Parties. She's also been involved with the launch of ShoMo Live, a site to connect bands and venues to make booking easier. The Kosters have also gotten involved with booking shows for MaxxMusic. Since 2005, they have also selectively made their home available for touring acts to stay.

Yeah, superfans is probably an understatement.

"It weighs more toward the intrinsic value of supporting the artist," Don says. "It's not a matter of being a fanboy or fangirl who want to hang out with them. If they're good people, we want to help them out, even if we don't like their music."

"Obviously, we have favorites who we'd really like to get to know," Laurie adds. "There are also bands we don't get close to."

The first time a band comes to Charlotte, they typically already have lodging arrangements. Don and Laurie's offer is usually declined with the addition of, "Maybe next time we're in town." And they usually take them up on their offer.

Because it's been nearly 10 years, bands changing members also expands the family tree of guests. "Joshua James was one of the first ones to stay here," Laurie says. "He had a place to stay the first time he was in town, but came back through with about 10 people and stayed with us. When he came through on Halloween one year, his bass player was Kyle Henderson. Kyle is now in Desert Noises, who now come through and stay with us all the time. We're like family at this point."

Or take Kishi Bashi, who has played with Jupiter One and Of Montreal and tours solo. He has also been a frequent guest.

"We will tell agents that we selectively host, so they aren't hitting me up any time they have a band in town — which they haven't done so far," Laurie says.

"I think word is getting out," Don says. "Not to blow our own horn, but bands have heard that we can offer them quiet enjoyment. We don't bring the whole venue audience home for an after-party. We have friends that picture the Rolling Stones tearing things up. These are musicians. They're artists. We have had parties where we're up until 5 a.m., but you have to remember they don't usually get here until 2 or 3 a.m.

"Sometimes a band member will go back in a room and we won't see them much — they'll ask for the Wi-Fi password or if they can take a shower ... all the way to someone running around the house in their underwear, but that's not the norm."