Draft Day: One for the fans | Reviews | Creative Loafing Charlotte
Switch to the mobile version of this page.

Draft Day: One for the fans 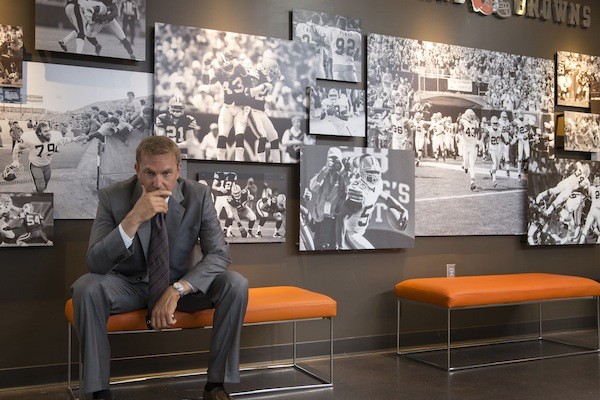 In 1966, recent Mad Monster Party guest William Shatner starred in Incubus, notable for being filmed entirely in Esperanto (created in the 19th century as a universal language, it obviously failed to catch on with the global masses). Since so few people stateside know the language, it's fortunate the movie's available on DVD with helpful English subtitles for U.S. audiences. Draft Day, on the other hand, offers no such subtitles for American moviegoers, and I suspect those who know absolutely nothing about football will have better luck understanding the Esperanto in Incubus than the gridiron shenanigans on display in this new release.

Kevin Costner, who is to sport flicks what John Wayne was to Westerns, stars as Sonny Weaver Jr., the embattled general manager of the NFL's Cleveland Browns. Acquiring the No. 1 pick in the 2014 draft, Weaver must decide how best to rebuild a struggling franchise, whether it's by engineering further trades or using the pick to land one of several promising prospects (including a youngster played by Chadwick Boseman, Jackie Robinson in last year's 42). The team's owner (Frank Langella) is breathing down Sonny's neck while the coach (Denis Leary) is battling him at every turn; only Ali (Jennifer Garner), his associate and girlfriend, offers any sort of support, though even they don't always see eye-to-eye when it comes to their relationship.

Perhaps even more than Moneyball with its baseball milieu, Draft Day is an insider flick for NFL fans, as it's difficult to see viewers who care even less about football than they do wiffle ball really giving a damn as to whether the Cleveland Browns end up in a better draft situation than the Seattle Seahawks or the Jacksonville Jaguars. But for those on its wavelength, the movie is an engaging affair, with a sharp script by screen newbies Scott Rothman and Rajiv Joseph, brisk direction by veteran Ivan Reitman (Ghostbusters), good actors in even the smallest roles (including Sam Elliott and Ellen Burstyn) and various NFL figureheads to provide that all-important verisimilitude (commissioner Roger Goodell, former stars Jim Brown and Deion Sanders, etc.). With so many positive elements, Draft Day is sure to leave select audiences feeling — quick, what's Esperanto for happy?