Fantastic flicks for Halloween | Features | Creative Loafing Charlotte
Switch to the mobile version of this page.

Say it's Christmas, and you want to watch a Yuletide flick to get into the swing of things. A half-dozen worthy titles spring to mind. For Easter, there are a handful of noteworthy films about Christ. And for Thanksgiving... uh, good luck.

But movies to prepare for Halloween? The world — or, more specifically, the online movie market — is your oyster.

From Abbott and Costello Meet Frankenstein to Zombie Island Massacre, from An American Werewolf in London to Zontar, the Thing from Venus, monster movies of all stripes are readily available to make a Halloween spent at home as enjoyable as one spent hopping from costume party to costume party. To that end, various outfits have released new Blu-rays to make this Halloween — and beyond — a haunting good time. What's more, this year's crop offers more than just the traditional movie monsters, as we are also privy to psychological terror, trippy sci-fi, fact-based horror and more. Here's the rundown:

The Movies: This must-own set contains six films starring the great Vincent Price, one of the legends of the horror genre. Four of the features are part of the renowned series of Edgar Allan Poe adaptations directed by Roger Corman: The House of Usher (1960), The Pit and the Pendulum (1961), The Haunted Palace (1963) and The Masque of the Red Death (1964). Corman and Price actually made seven Poe flicks together (the others being 1962's Tales of Terror, 1963's The Raven and 1964's The Tomb of Ligeia), and while it would have been wonderful to have all of them collected together in one Blu-ray compilation, I'm not about to complain about the two non-Poe titles filling out this set: Witchfinder General (1968) and The Abominable Dr. Phibes (1971).

Best Bet: The Masque of the Red Death is the best of the Poe films included here, and I've always enjoyed The Abominable Dr. Phibes, with Price as a madman killing the doctors he holds responsible for not being able to save his wife on the operating table. But the top treat is Witchfinder General, a genuinely disturbing drama with Price delivering an excellent performance as real-life, 17th century witchhunter Matthew Hopkins, who satisfies his lusts for money, power and sex under the guise of a Christian seeking to rid the world of evil.

Extra Features: Five of the six pictures include an introduction and closing comments by Price (filmed in 1982 for an Iowa PBS station), while Corman is represented via audio commentaries on two of the Poe flicks and interviews on the remaining two. There are also audio commentaries on their respective films by The Abominable Dr. Phibes director Robert Fuest and Witchfinder General producer Philip Waddilove and co-star Ian Ogilvy; an hour-long interview with Price that was conducted in 1987; a rare prologue for The Pit and the Pendulum that makes no sense in the context of the film (is there also a long-lost epilogue that ties it all together?); the featurette Witchfinder General: Michael Reeves' Horror Classic; theatrical trailers for not only all six films in this set but also for several other Price titles like The Raven, House of Wax and The Fly; and a 24-page booklet packed with great photos. 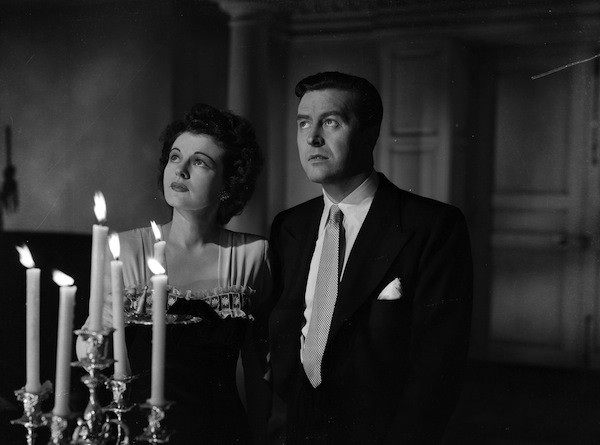 I MARRIED A WITCH / THE UNINVITED

The Movies: Criterion gets into the All Hallows Eve act with two appropriate releases, one tackling its spooky premise from a humorous stance and the other offering full-blown chills. The screwball comedy I Married a Witch (1942) stars Veronica Lake as a witch who, centuries after being burned at the stake by a religious zealot (Fredric March), returns to get her revenge on the man's descendant (also March); naturally, the sparks fly along with the broomsticks. The Uninvited (1944) casts Ray Milland and Ruth Hussey as siblings who buy a quaint home in Cornwall, only to discover that it may be haunted.

Best Bet: Have you seen The Haunting? The Innocents? The Conjuring? It all began with The Uninvited, which was reportedly the first serious movie about a haunted house (previous pictures had all been heavy on the comedy). Lewis Allen provides the suitably somber direction while composer Victor Young contributes the enchanting "Stella By Starlight," which became an immediate hit and endures as a classic standard.

The Movies: Twilight Time is a tony outfit that works with studios to release select titles in limited Blu-ray runs of only 3,000 copies; their movies are available at www.screenarchives.com, but once they sell out of a particular film (as has been the case with Body Double, Christine and a few others), your only hope is from individual sellers on eBay and Amazon. Doubtless mindful of the time of year, the company has released a pair of terror tales in time for Halloween. The Other (1972) focuses on twin brothers (Chris and Martin Udvarnoky) and the tragedies that unfold when it appears that one of them is a bad seed. Mindwarp (1992) stars two horror faves, The Evil Dead's Bruce Campbell and Phantasm's Angus Scrimm, in a post-apocalyptic yarn where humans either live in a protected virtual-reality landscape or on a savage surface that's mainly populated by cannibalistic mutants.

Best Bet: The Other, based on the best-selling novel by Tom Tryon (a book I greatly appreciated as a teen), is a moody, mysterious piece, with subdued direction from Robert Mulligan (To Kill a Mockingbird), a rare screen appearance by the world-renowned acting teacher Uta Hagen and a script penned by Tryon himself.

VOYAGE TO THE BOTTOM OF THE SEA / FANTASTIC VOYAGE

The Movies: Obviously, these are science fiction films rather than horror movies, but we fantasy-flick fans care little about such distinctions when it comes to having our imaginations engaged at Halloween. Voyage to the Bottom of the Sea (1961) casts Walter Pidgeon, Barbara Eden, Peter Lorre and Frankie Avalon as officers aboard an atomic submarine that might be Earth's only hope against its own destruction. Fantastic Voyage (1966) stars Arthur Kennedy, Raquel Welch and Donald Pleasence as scientists who are shrunk small enough to enter into the comatose body of an important defector in order to dissolve a blood clot and save his life.

Best Bet: An Oscar winner for Best Visual Effects and Best Art Direction-Set Decoration, Fantastic Voyage runs with its fantastic premise, as the members of the miniaturized submarine must battle the body's natural defenses while also contending with a traitor in their midst — and successfully complete their mission before they all return to normal size within the hour.

To read full reviews of all films covered in this story, check out upcoming View From The Couch columns at www.clclt.com/film.