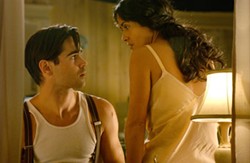 ASK THE DUST Movies don't get much more languid than Ask the Dust, yet for all its lackadaisical moseying when a trot here and there might have helped, the picture isn't easy to shake. Scripter Robert Towne, the Oscar-winning genius behind Chinatown in the 1970s and the gun-for-hire behind Days of Thunder in the 1990s, leans on his LA-period vibes to add shape to his adaptation of John Fante's novel. Directed and scripted by Towne, Ask the Dust (a terrible title whatever its pedigree; it sounds like those faux art-house movies spoofed in those Energizer Bunny commercials) casts Colin Farrell as Arturo Bandini, an Italian writer struggling to come up with meaningful prose while sweating it out in a shabby LA hotel. Down at the corner diner, he meets Camilla (Salma Hayek), a Mexican waitress forced to contend with prejudice on a daily basis. Arturo and Camilla verbally spar almost from the start, but over time they struggle to overcome their own fears and biases to form a meaningful bond. The love-hate relationship between Arturo and Camilla may strike many viewers as contrived, but their inexplicable mood swings will feel recognizable to anybody who's ever experienced (or observed) the maddening way that two compatible people will unaccountably behave when thrust into each other's presence. More difficult to swallow are the heavy-handed narrative developments (an earthquake, an out-of-left-field fatal illness) that dominate the film's second half. **1/2

CACHÉ (HIDDEN) To borrow the words of Winston Churchill, Caché is a riddle wrapped in a mystery inside an enigma -- and it's equally powerful whether one is watching it in the moment or reflecting on its mysteries three months later. Daniel Auteuil and Juliette Binoche play Georges and Anne Laurent, a well-to-do French couple being anonymously sent videocassettes that show nothing but seemingly benign images. But the deeper implication is that someone is watching -- and recording -- their everyday activities, and this realization throws their lives into disarray and sends Georges on a mission to uncover long-buried secrets from his past. Writer-director Michael Haneke has crafted a dark, dense film packed with meaty material: an indictment of the French treatment of Algerians; a thorny examination of family dysfunction; and, in the same manner as Hitchcock's Rear Window, a direct implication of movie audiences as the ultimate voyeurs. It's imperative that viewers pay close attention to the final shot, which may -- or may not -- clear up the mystery. ***1/2

CAPOTE Anyone heading into Capote expecting an exhaustive expose on the literary lion and social raconteur might be disappointed to learn that this focuses exclusively on the period when he researched and wrote his nonfiction masterpiece In Cold Blood. In a way, it is an odd choice for a film: Almost everything you need to know about this incident -- and, therefore, Capote's viewpoint -- can be found in Richard Brooks' superb 1967 screen version of In Cold Blood. But the selling point is the excellent, Oscar-winning performance by Philip Seymour Hoffman: As much as Jamie Foxx channeled Ray Charles to such a degree that it was impossible to tell where the spirits of the two men separated, likewise does Hoffman tackle the persona of Truman Capote and make it his own. Constantly punctuating the air with his whispery wit and entertaining other people as if to the (diva) manner born, Capote is as original on screen as he was in real life. ***

DAVE CHAPPELLE'S BLOCK PARTY It's a behind-the-scenes documentary, a concert and a stand-up act all rolled into one. Comedian Dave Chappelle heads to his Dayton, OH, hometown to hand out golden tickets (similar to those given out by "wee Willy Wonka," as he calls him) to attend his block party in Brooklyn. Chappelle invites everyone from young black dudes to elderly white women to attend his shindig, which turns out to be a celebration of hip-hop: Among those taking part in the musical mirth are Kanye West, Mos Def, Erykah Badu and the reunited Fugees. Dave Chappelle's Block Party, not so much directed as observed by Michel Gondry (Eternal Sunshine of the Spotless Mind), is unique in the manner in which it salutes Afro-American culture and unity while at the same time exhibiting an exalted openness that makes it clear everyone's invited to take part in the merriment. The comic material is spotty, but the sizzling concert performances are the primary attraction anyway. ***

EIGHT BELOW Based on a Japanese film that was itself inspired by a true story, Eight Below relates the tale of a scientific expedition in Antarctica and what happens when punishing weather forces its members to leave behind their eight sled dogs to cope with exhaustion, starvation and a particularly nasty leopard seal. The dogs are gorgeous and wonderfully expressive (no creepy Snow Dogs-style anthropomorphizing here, thank God), and as long as director Frank Marshall and debuting scripter Dave DiGilio focus on this part of the story, the movie succeeds in the grand tradition of past Disney live-action adventures. But the picture runs an unpardonable two hours (can little kids' bladders hold out that long?), and its length is felt in the countless scenes centering on the human characters back in civilization. At 95 minutes, this would have been an out-and-out winner; maybe the DVD will include a function that will allow viewers to edit out the humans and leave only the remarkable canines. **1/2